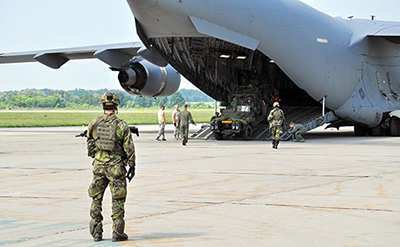 The bill applies not only to Ukraine. It also proposes to speed up the modernization of the Navy, to allocate money for the support of the Afghan army, as well as to suspend the closure of the prison at Guantanamo Bay.

To document entered into force, its the end of July should be coordinated with the House of Representatives, and then send for signature to President Barack Obama. However, the White House has said that the head of state can impose its veto.

The debate on military assistance to Ukraine is conducted in the United States for several months. Part of the military and Congress – members of the Republican Party – believes that Barack Obama should take a tougher stance and begin delivery of lethal weapons in Ukraine. Until now, the US president spoke out against the initiative, considering it a last resort.

Rebels carried out 90 attacks on positions of ATO forces with Grad MLRSs, artillery, machine-guns, and grenade launchers along the whole demarcation line in the past 24 hours, the ATO press-centre posted on Facebook.

"Gunmen intensified their activity in the evening. In total, they assaulted army positions and houses of civilian residents 55 times overnight, a report reads.

They fired machine-guns and 82-mm mortars on Pisky, Opytne, Krasnogorivka, and Maryinka.

Zolote and Sokolnyky, Lugansk region, came under fire after midnight.

"But the most intense attacks were carried out on Maryinka, where gunmen bombarded our troops at least 10 times," the General Staff reports.

According to the headquarters, militants have planned to relocate additional artillery divisions to the demarcation line.

Tymchuk: Trained insurgents arrive in Donetsk and Maryinka from Russia

About 450 to 500 rebels trained in military camps in the Crimea and Rostov-on-Don (Russia) have been redeployed to Donetsk, the coordinator of the Information Resistance Group, Dmytro Tymchuk announced.

According to IRG, "part of rebels are Donbas locals, and no less than 70% are RF citizens including pardoned criminals".

According to sources, machinery, weapons and equipment for the group were brought to Donetsk beforehand.

Terrorists continue to relocate forces via Stukalova Balka in order to reinforce rebel tactical task forces deployed to Obozne. About 14 tanks and 28 to 30 ACVs had been previously relocated to the city.

An artillery division comprised of 122-mm 2S1 "Gvozdica" SP artillery systems and D-30 cannons was deployed to an area to the north of Lugansk.

Lysenko: No deaths reported in the past 24 hours; 1 serviceman wounded

No casualties among Ukrainian military were reported in the ATO area, apart from one soldier wounded, a spokesman for the Presidential Administration on ATO issues, Andriy Lysenko, reported at a briefing.

He also added that 8 enemy UAVs had been spotted spying over the ATO area.

Russian Foreign Minister Sergey Lavrov has confirmed that Russia has certain leverage to influence the leaders of the self-proclaimed Donetsk and Luhansk republics, but it is not 100%

"Certainly, we do have an influence on them. They are greatly dependent on us. To take humanitarian aid alone, which no other donor provides there in such great amounts," Lavrov said.

"And, of course, they depend on us politically, because we want to see their legitimate rights as part of the Ukrainian people respected in the context of the settlement. Is that influence as great as 100%? Certainly not," Lavrov told the RBC television channel in an interview.

On 19 June 2015, the Council extended the EU restrictive measures in response to the illegal annexation of Crimea and Sevastopol until 23 June 2016. The sanctions include prohibitions on:

As stated by the European Council on 19 March 2015, the EU continues to condemn the illegal annexation of Crimea and Sevastopol by the Russian Federation and remain committed to fully implement its non-recognition policy.