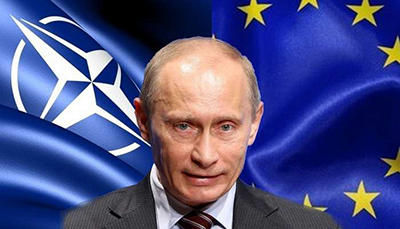 Breedlove: Putin is not going to leave Donbass

Russian President Vladimir Putin is not done in eastern Ukraine, NATO's top commander said on Thursday, cautioning that Russia has been building up supplies on its border with Ukraine and keeping its military options open.

Force levels on Russia's side of the border had not changed much in recent months, Breedlove said, but U.S. military officials had observed in Russia a "stocking of important supplies, ammunition, etc., to levels that would support operations".

Inside Ukraine, where pro-Russian separatists are battling Ukrainian forces, Breedlove said "we see a force that has been trained, that is led by Russian leadership, ... and is ready to do whatever mission is required of it in the Donbass (region)."

"I don’t think Mr Putin is done in eastern Ukraine," Breedlove told reporters, and Kiev, despite Moscow's hopes, was still looking to the West for support.

A fragile ceasefire has been in force in eastern Ukraine since February, but each side accuses the other of violations. Kiev fears Russia could commit troops to a push to extend control by separatist forces deeper into Ukrainian territory.

Russia denies having troops inside the country.

NATO Secretary-General Jens Stoltenberg said it would be unwise to declare the ceasefire dead, despite violations, because it remained the "the best possible foundation for a peaceful solution.

"Without the Minsk agreements I am really afraid that the situation can deteriorate even more," he told a news conference.

86 rebel attacks in the ATO area, 50 of which occurred near Donetsk

Schastya, Novotoshkivka, and Stanyzia Luganska were mortared, and Shyrokine shelled in the evening with 152-mm howitzers and 120-mm mortars. Gunmen mounted numerous assaults on the town with machine-guns.

The village of Granitne near Mariupol was bombarded with heavy guns.

ATO positions have been assaulted by rebels over 10 times since Friday morning.

Obama urged Putin during his conversation on the phone

to withdraw Russian troops from Ukraine

Russian President Vladimir Putin called his US counterpart Barack Obama on Thursday to discuss the conflict in Ukraine, the Islamic State group's advances and a deal on Iran's nuclear program.

The crisis in Ukraine has triggered the worst standoff between Russia and the West since the Cold War, and the US said earlier this week it would deploy heavy weapons in central and eastern Europe for the first time.

The US announcement followed promises by NATO on Monday to step up its military presence in Eastern Europe, against the backdrop of the conflict in Ukraine.

Putin, who has consistently denied backing the pro-Russian rebels in Ukraine, initiated the phone call with Obama, according to the White House.

"President Obama reiterated the need for Russia to fulfil its commitments under the Minsk agreements, including the removal of all Russian troops and equipment from Ukrainian territory," it said in a statement.

The crisis in Ukraine has killed 6,500 people in a little over a year and a peace deal struck in Minsk, Belarus has unravelled.

Merkel: The armistice in Donbas violated by both parties

"The ceasefire is breached by both sides, although separatists do this more often,"

German Chancellor Angela Merkel said in Brussels at a briefing after the EU summit.

"We did not talk about Ukraine and Russia today," Merkel said.

However, according to her, Ukraine will clearly be the topic of a Friday meeting dedicated to the common foreign policy.

According to the chancellor, the situation with the Donbass truce is worsening, with the progress of the working groups getting on slowly.

"In reliance on reports of the OSCE special monitoring mission, we have come to a conclusion that the ceasefire was breached by both sides, although separatists did this more often," Merkel said.

Two civilians were wounded in Stanyzia Luganska as a result of explosions of a mine and an unidentified fire device, the press service of the Lugansk region governor, Gennady Moskal, reports.

Stanyzia Luganska was fired upon twice on the night 25 to 26 with mortars and machine-guns, including grenade launchers and heavy machine guns. The first attack was launched at 9PM and ended at midnight, the second one occurred in the period between 3 and 5AM.

According to the preliminary data, no casualties were reported; further information is being ascertained.

ATR, "15 minutes", and "Crimea. Realities" banned in the Crimea

The authorities of the annexed Crimea have "recommended" Crimean Tatar cultural institutions to ban employees of the Crimean Tatar ATR Channel, the local news agency “15 minutes”, and the Crimean news agencies “Krym.Realii” and QHA from entering their territory, Ukrainian newspaper Ukrainska Pravda reported on Friday with a reference to ATR Deputy Director General Lilia Budzhurova.

"Recently, two Crimean Tatar cultural institutions warned us that we would not be able to film. They referred to a letter from the Ministry of Internal Policy and Information of the Russian Federation, where they were advised to prohibit journalists of ATR, “15 Minutes”, “Krym.Realii”, and QHA from entering their territory. We have a question: can we breathe at home?" Budzhurova asked.

As reported earlier, after Russia’s annexation of the Crimea, the occupation authorities first refused to issue broadcasting licenses to independent media. But then, they changed their mind and granted Roskomnadzor’s (Federal Service for Supervision of Communications, Information Technology and Mass Media) permissions to ATR and other media.

1 military died, and 3 others were wounded in the area of the anti-terrorist operation in the past 24 hours, a spokesman for the Presidential Administration on ATO issues, Andriy Lysenko, reported at a briefing.

According to him, 7 rebel drones were observed spying on Thursday.