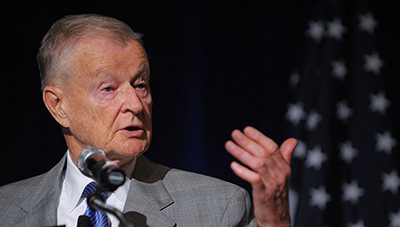 Russia needs to be assured Ukraine will not join NATO, former US National Security Advisor to Jimmy Carter, Zbigniew Brzezinski, told Der Spiegel in an interview.

"But at the same time Ukraine should have the right to freely choose its political identity and link more tightly with Europe if it chooses. That is the solution,” Brzezinski said.

Brzezinski said he supported weapons supplies to Ukraine and said NATO should go to war with Russia if Putin invaded the Baltics.

“If we hung a sign on our house ’We are off, the doors are not closed.’ Do you think that’s a smart security strategy?"

“I do not want war, but I’m not prepared to be intimidated by the assertion that we might provoke a war with a symmetrical response. On the contrary, if we do not react this is the most likely way to bring about a war,” Brzezinski went on.

The 87-year-old, who works at the think-tank Centre for Strategic and International Studies’ (CSIS ) in Washington, appeared to be his usual realist self. “We have long been in a Cold War. Fortunately, it is still unlikely that it will become a hot conflict.”

“If Ukraine does not break down, then the pressure will force Russia’s leaders at home to look for alternatives,” Brzezinski went on.

Asked if Putin was in fact ‘smart’ enough to look for alternatives, Brzezinski answered: “It’s hard to say. He has definitely over instinctive cunning, he has great finesse. I just wonder why he almost wilfully pushed 40 million people in a neighbouring country against him. The Ukrainians had indeed until recently no hostile feelings towards Russia.”

Brzezinski drew a line against comparing the 1930s with today. “Between Putin and Hitler there are similarities and differences. Hitler, for example, was never really interested in getting rich. Putin is. Perhaps this life perspective is able to moderate his political passions. But it is particularly dangerous that Putin is a player.”

General Staff: 83 attacks in the ATO area in the past 24 hours

The aggressor carried out 83 attacks on Ukrainian positions in the past 24 hours, the ATO press-centre reports.

Rebels conducted 38 attacks on ATO positions yesterday; over 40 breaches of the ceasefire initiated by illegal paramilitaries were reported between the late evening and midnight, June 29.

"Kremlin mercenaries fired 82- and 120-mm mortars along the entire demarcation line; the latter had been banned by the Minsk agreement.

In particular, gunmen fired on Maryinka, Krasnogorivka, the Butivka mine, and Pisky from their positions in occupied Donetsk.

The settlements of Novotroitske and Granitne in the south of the Donetsk region came under rebel mortar attack.

UN: 6,500 people killed, and 5 million require help in the east of Ukraine

Around 6500 people have died, and 16 thousand sustained wounds in Eastern Ukraine for the year of armed conflict; over 5 million are in need of humanitarian aid, UN Office for the Coordination of Humanitarian efforts reports with a reference to UN Coordinator Neal Walker.

“With no political solution in sight, and the number of people fleeing their homes continuing to rise, the situation is dire,” he states.

Violence in the Ukraine has killed 6,500 people in the past year, wounded 16,000 and left 5 million people in need of humanitarian aid.

Access to water remains a critical issue for many civilians, with up to 500,000 people with poor or no access to water. This increases the risk of water-borne disease outbreaks, especially as temperatures are rising.

With more than 1.3 million registered IDPs, Ukraine has now the ninth largest number of internally displaced in the world, according to the Internal Displacement Monitoring Centre.

Aid agencies in Ukraine are committed to helping all those in need, but there must be a peaceful political solution to this crisis before it becomes even worse, the report reads.

Life in the embattled provinces of eastern Ukraine is also precarious from a healthcare standpoint as services are increasingly curtailed due to lack of medicine and medical equipment. Yet the UN and its partners have still been able to provide basic health services, including health kits for 2.6 million people and vaccinations for 30,000 people.

as rebels move it up to their forward positions

The withdrawal of military hardware - first of all tanks - from the demarcation line in Donbass, announced before June 26, has unconditionally been disrupted, the head of the Information Resistance Group, Dmytro Tymchuk, posted on Facebook on June 30.

In the Mariupol direction, rebels fired 120- and 122-mm mortars and artillery on army positions near Shyrokine, Lebedynske, and Berdyanske.

Ukrainian troops deployed to Pavlopol and Chermalyk were attacked by rebels with machine-guns and AHS-17.

Insurgents committed to action mortars and tanks near the Svitlodarsk foothold. Fire attacks were mainly placed on army positions near the settlements of Luganske, Myronivske, Novozvanivka, and sometimes on the eastern edge of Popasna.

Several rebel units simultaneously bombarded our positions near Maryinka with 82-mm mortars, also supported by AHS-17. Rebels regrouped their divisions to the west of Oleksandrivka, to the south of Maryinka and in areas between Maryinka and Krasnogorivka backed by grenade launchers.

They committed to action heavy artillery near the settlements of Opytne, Pisky, Krasnogorivka, and the south of Avdiyivka.

No losses were reported in the area of the anti-terrorist operation in the past 24 hours, a spokesman for the Ukrainian National Security and Defence Council, Andriy Lysenko, reported at a briefing on Tuesday.

According to him, three soldiers were wounded in the western suburbs of Donetsk.

Furthermore, 5 rebel drones were spotted over the ATO area in the past 24 hours.

U.S. experts publish a scenario of war between Russia and NATO

It was in August 2014 that the real danger began, and that we heard the first warnings of war. That month, unmarked Russian troops covertly invaded eastern Ukraine, where the separatist conflict had grown out of its control. The Russian air force began harassing the neighbouring Baltic states of Estonia, Latvia, and Lithuania, which are members of NATO. The US pledged that it would uphold its commitment to defend those countries as if they were American soil, and later staged military exercises a few hundred yards from Russia's border.

Fearing the worst of one another, the US and Russia have pledged to go to war, if necessary, to defend their interests in the Eastern European borderlands. They have positioned military forces and conducted chest-thumping exercises, hoping to scare one another down. Putin, warning repeatedly that he would use nuclear weapons in a conflict, began forward-deploying nuclear-capable missiles and bombers.

Should the warnings prove right, and a major war break out in Europe between Russia and the West, then the story of that war, if anyone is still around to tell it, will begin with Russian President Vladimir Putin trying to solve a problem.

Unable to cross America's red lines, Putin is doing his best to muddy them — and, to deter the Americans, muddying his own. Turning otherwise routine diplomatic and military incidents into games of high-stakes chicken favours Russia, he believes, as the West will ultimately yield to his superior will.

The United States, of course, has no intention of militarily retaking Crimea, despite surprisingly common fears to the contrary in Russia. But Russian paranoia about such a threat, and a possible willingness to use nuclear weapons to avert it, adds more danger to the already dangerous war in eastern Ukraine and the fears that greater Russian or Western involvement there could spark a broader conflict.

We may have escaped the Cold War, but we have not escaped the nuclear threat, which not only remains but is growing. The sense that this danger is resigned to history books, common in Washington and other Western capitals, is precisely part of its danger. It is another echo of the months and years before World War I, when the world drifted unknowingly toward disaster.

"The probability of inadvertent nuclear use is not zero and is higher than had been widely considered," it stated. "The risk associated with nuclear weapons is high" and "under-appreciated."

Their warnings were widely ignored. As the report itself noted, the world has concluded, wrongly, that nuclear weapons no longer pose an imminent threat. Attention has moved on. But the seeds of a possible war are being sown in Europe. Should the worst happen, which is a remote but real possibility, the consequences will follow all Americans to their homes.