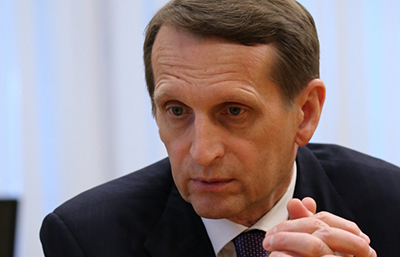 Finland has denied entry to the Russian State Duma speaker to participate in July’s session of the Parliamentary Assembly of the Organization for Security and Cooperation in Europe (PA OSCE), TASS reports with a reference to Finland’s Foreign Ministry spokesperson Vesa Hakkinen.

Such decision was made because Naryshkin had been included in EU’s sanctions list, Hakkinen said.

The foreign ministry spokesperson said earlier that six members of the Russian delegation who are included in the "blacklist" will be denied entry to Finland to participate in the PA OSCE session.

The Finnish Foreign Ministry held consultations until the very last moment about the possibility to allow them entry to the country as an exception. "I can confirm that Naryshkin is among those who will be denied entry," Hakkinen said. "I cannot disclose other names now, but the information about people on EU’s sanctions list is open," he added.

"We consulted with other EU member countries, EU’s and OSCE’s leaders before making a final decision," Hakkinen noted.

A source in the State Duma said earlier that Naryshkin plans to participate in the summer session of PA OSCE. Two draft resolutions that will be put forward for PA’s consideration were proposed by Russia.

As reported earlier, Naryshkin was put on the list of sanctions by the EU, the USA and other countries after Russia's illegal takeover of Crimea from Ukraine.

The next session of the OSCE is to take place in the capital of Finland on 5th to 9th July.

ATO Headquarters: Militants fired in all directions, mostly near Mariupol

Rebels carried out 53 attacks on army positions with heavy armaments in the past 24 hours, the press service of the ATO Headquarters reported on Facebook.

Ukrainian troops stationed near Pisky and Novhorodske were fired upon with 120- and 82-mm mortars from rebel positions in occupied Donetsk. According to reports, rebels also fired incendiary mortar shells.

Rebels have intensified their activity on the outskirts of Mariupol. Shyrokine was assaulted several times with various weapons. Terrorists shelled Berdyanske at midnight with portable Grad MLRSs and 122-mm howitzers.

IRG: Militants become active in the direction of Kostyantynivka and Avdiyivka

Militants stationed near Kostyantynivka and Avdiyivka have intensified their activity; Stakhaniv and Pershotravneva rebel groups have become more active too, the founder of the  Information Resistance Group, Dmytro Tymchuk, posted on  Facebook on the morning of July 1.

In the Mariupol direction, insurgents carried out intense attacks with 82- and 120-mm mortars, as well as 122-mm artillery from their positions located to the north of Bezimenne and to the east of Krasnoarmiyske.

Positions of ATO forces near Shyrokine, Lebedynske, and Berdyanske came under fire. Ukrainian troops situated in the area between Gnutove and Talakivka were also assaulted.

Army positions near the settlements of Maryinka, Pisky, Krasnogorivka, and the Butivka mine were shelled with AHS-17 and mobile ZU-23-2 systems installed on multi-purpose light-armoured towing vehicles and trucks.

Russian UAV operators and specialists in electromagnetic warfare have arrived in Gorlivka with bodyguards and no insignia on them, the founder of the Information Resistance Group, Dmytro Tymchuk, posted on Facebook on the morning of July 1.

An armoured unit comprised of 6 ICV-1s accompanied by 3 trucks was moved to Donetsk via Kalynivka.

Another rebel armoured unit was relocated to Debaltseve. It included 5 T-72BA tanks, 2 T-64B tanks and one Potik-2 armoured command vehicle, as well as 2 APC-80s.

OSCE: Rebels continue to export coal from the occupied Lugansk region to Russia

The traffic flow at the Gukovo BCP has increased compared to last week. A daily average of 2836 entries and exits was recorded, which accounted for just over nine per cent of all entries/exits in the Rostov region, an OSCE report reads.

As in previous weeks, the OM observed dumper trucks transporting coal from the Luhansk region to the Russian Federation. The OT also observed tanker trucks with the word “Propane” or “Flammable” and orange articulated fuel trucks crossing the border in both directions.

The OTs continued to pick up the sound of trains running on the train tracks located approximately 150 meters south-west of the BCP. During the reporting week, the OTs heard trains on fourteen occasions; the OTs estimated that seven trains went to Ukraine and seven trains went to the Russian Federation. Visual observation was not possible because of the line of trees in between the train tracks and the BCP.

As reported earlier, OSCE observers have recorded numerous facts of exporting Ukrainian coal from the ATO area to Russia.

Militants announced that they see Shyrokine as a de-militarized zone

The PRD leadership has announced they see the village of Shyrokine, Novoazovsk district, as a de-militarized zone, the separatist periodical DAN reported with a reference to one of the leaders, Denis Pushilin.

"As a good will gesture and a demonstration of peaceful aims, the leadership of the Donetsk People’s Republic has decided to unilaterally regard the village of Shirokino a demilitarized zone," Pushilin was quoted by the Donetsk news agency as saying.

"The DPR armed forces have received orders not to open even a response fire in this direction," he said.

"In order to stabilize the situation in Shyrokine, we propose creating a demilitarized zone in the area of this settlement," said Pushilin, who is also deputy speaker of the DPR's People's Council.

The control over the situation should be handed over to the OSCE monitoring mission that "will be the guarantor of peace and calm."

The issue of Shyrokine demilitarization has been one of the most challenging as part of the agreements on withdrawing weapons with a calibre of under 100 mm.

As reported earlier, the Ukrainian part in the Trilateral Contact Group proposed in April to demilitarize Shyrokine.

Mariupol residents requested the President of Ukraine to withdraw from this idea. They asserted that the territory of Shyrokine is a strategically important high point, and Mariupol would be under threat if rebels seized it.

Military banned from using cell phones in the ATO area

The Verkhovna Rada adopted an amendment to the Statute of the Internal Service of the Armed Forces of Ukraine prohibiting the Ukrainian troops from using cell phones and other data transmitting devices without their commander’s permissions.

The law provides that a commander of a military unit sets the procedure for the storage and use of personal cameras, tape recorders, radios, cell phones, other mobile communication and data transmission devices, computers and other household electronic equipment for the military on active duty.

According to the amendment, “military personnel performing the duties of military service are prohibited from using personal mobile communication devices: in the areas of Anti-terrorist operation, in an emergency period or during a special period in areas where combat operations take place.”

1 military died, and 10 others were wounded in the area of the anti-terrorist operation in the past 24 hours, a spokesman for the Presidential Administration on ATO issues, Andriy Lysenko, reported at a briefing.

According to him, ATO forces suffered losses in the Donetsk direction.

Among the main hot points, there were Pisky and Maryinka.