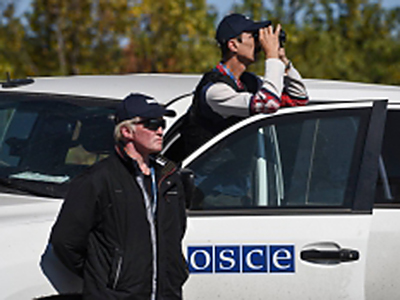 Special monitoring mission of the Organization for Security and Cooperation in Europe reported 168 explosions in and around the Donetsk airport on June 30 according to the latest report of the mission.

The fighting at and around Donetsk airport continued with increased intensity compared to the previous days. Between 9:03 and 13:00hrs, at the Joint Centre for Control and Co-ordination (JCCC) observation point at Donetsk central railway station (“Donetsk People’s Republic” (“DPR”)-controlled, 8km north-west of Donetsk city centre), the SMM heard and saw 168 explosions consistent with mainly mortar and tanks rounds. Of those, 109 explosions occurred north and north-west of Spartak and of Donetsk airport (both “DPR”-controlled), in the area between government-controlled and Opytne, Butrovska mine and Muraveynyk (both government-controlled) at a distance of 3-7km from the SMM position. Another 39 explosions occurred 10-15km north-east of the SMM position, the report reads.

A relative decrease in rebel activity on Wednesday afternoon did not last for long; gunmen breached the ceasefire over 30 times in various sectors of the demarcation line before midnight, the ATO press-centre reports.

In total, separatists carried out 54 attacks on Ukrainian troops with various weapons in the past 24 hours, including banned heavy armaments.

Pisky and Maryinka located not far from rebel-held Donetsk came once again under fire. Militants shelled the settlements with mortars and grenade launchers. In this direction, Pervomayske was bombarded with 122-mm howitzers, and Slavne and Taramchuk with 120-mm mortars.

Pro-Russian outlawed units of gunmen bombarded Starognativka with tanks and mortars. The outskirts of Berdyanske were shelled with 122- and 152-mm howitzers around midnight.

Furthermore, insurgents continue to shell Shyrokine breaking their promises of demilitarization. Ten more attacks on Ukrainian positions have been recorded since the beginning of the day.

No losses were reported in the area of the anti-terrorist operation in the past 24 hours, a spokesman for the Ukrainian National Security and Defence Council, Andriy Lysenko, reported at a briefing on Thursday.

According to Lysenko, 4 soldiers were wounded on the Donetsk outskirts.