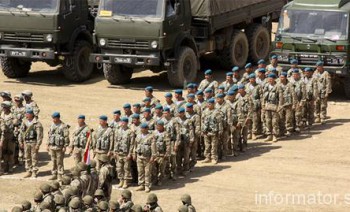 in the ATO area and along the border

Over 50,000 Russian troops and 30,000 rebels are massed along the Ukrainian border and in eastern Ukraine, the press officer of the ATO headquarters, Colonel Dmytro Hutsuliak said at a briefing on Friday, according to an UNIAN correspondent.

"The situation in the Donbass conflict zone remains tense in a number of areas. According to the ATO Headquarters, insurgents continue to mass their forces in the rear of occupied territory. In addition, they are working actively to create strike groups and carry out combat training of newly formed units," he said. As reported earlier, President Petro Poroshenko announced late June that there were 60 thousands Ukrainian military in the ATO area.

Only three attacks on positions of ATO forces were reported in the period from midnight to 6AM in the area of the antiterrorist operation, the press service of the ATO Headquarters reported on Facebook.

Terrorists fired machine-guns on positions of Ukrainian troops near the settlement of Rozsadky, Donetsk region. They also carried out an artillery attack on the outskirts of Tryokhizbenka, Lugansk region, with 152-mm heavy guns.

The rebel activity in Donbass has significantly decreased, but they continue to fire weapons banned by the Minsk agreement, MP Dmytro Tymchuk published the information provided by the Information Resistance Group on Facebook.

Insurgents committed tanks near the Butivka mine backed by 82- and 120-mm mortars.

Apart from Stanyzia Luganska, further clashes close to the demarcation line occurred at the Bakhmutka highway near the 29th roadblock, as well as in Tryokhizbenka, which was shelled at 1AM with self-propelled artillery weapons.

As announced earlier, a relative lull in the fighting was reported in the Lugansk region during the last two days.

No losses were reported in the area of the anti-terrorist operation in the past 24 hours, a spokesman for the Presidential Administration on ATO issues, Oleksandr Motuzyanyk, reported at a briefing on Friday.

9% of volunteers called up during the fifth mobilisation wave

There were 9% of volunteers among the recruits drafted during the 5th wave of mobilisation, First Deputy Head of the Chief Department for Defensive and Mobilization Planning of the General Staff Volodymyr Talalay announced at a briefing on Friday, as reported by Ukrainski Novyny.

According to him, during the sixth wave of mobilization, they managed to ensure the rotation of personnel, who were called up during the second wave.

"The average age of recruits called up during the 5th wave of mobilisation stood at 35 years... 77% of them had experience in military services, and 9% were volunteers," he said.

As reported earlier, the sixth wave of mobilisation began on June 19.