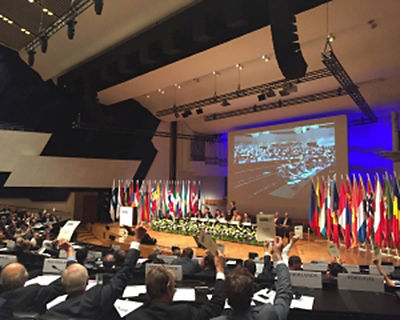 PA OSCE has recognised the fact of Russian military aggression against Ukraine, Member of the Ukrainian delegation to the Parliamentary Assembly, Verkhovna Rada of Ukraine Deputy Ostap Semerak posted on Facebook.

According to him, the OSCE Parliamentary Assembly adopted the resolution on "Obvious, gross and uncorrected violations by the Russian Federation of the OSCE commitments and international rules."

A new move by the Russian Parliament to outlaw so-called undesirable organizations is yet another nail in the coffin for freedom of expression and civil society in Russia, said Amnesty International today.

The submission by the Council of the Federation, Parliament’s upper house, of a list of 12 foreign NGOs working in Russia to the Prosecutor General’s Office and the Foreign Ministry may lead to them being banned as “undesirable” under a law adopted last May. “Undesirable” organizations” are loosely defined under the law as those posing a threat to the country’s “constitutional order, defence potential or state security”.

“The submission of this list is yet another move to suffocate freedom of expression and association in Russia, and its intended targets are not just foreign organizations but independent civil society in the country itself,” said John Dalhuisen, Director for Europe and Central Asia at Amnesty International.

“This is an unwarranted and unnecessary tactic aimed at ending the legitimate activities of those engaged in work at odds with the Russian authorities. NGOs, both Russian and foreign, are already closely monitored, and sufficient legal mechanisms already exist to tackle any organizations which may be engaged in unlawful activities.”

Among the organizations listed there are the Crimean Field Mission on Human Rights, Freedom House, two organizations working with the Ukrainian diasporas around the world and several foundations that provide funding and support to civil society initiatives in Russia.

Spokespeople for Parliament’s upper house, the Council of the Federation, have indicated that the list is neither final nor exhaustive. As a reason for their initiative, they claim that the current “unprecedented scale” of funding of “political activities” by NGOs from foreign sources constitutes a “soft aggression” against Russia and its people.

“The criteria the Russian authorities will use to designate ‘undesirable organizations’ are ill-defined, arbitrary and nebulous,” said John Dalhuisen.

As reported earlier, Russia entered the World Congress of Ukrainians, the Ukrainian American Coordinating Council, the Crimean Field Mission on Human Rights and other organizations in its stop-list of non-profit organizations.

OSCE recorded blasts near Donetsk; a lull in the Lugansk region

Insurgents carried out over 20 attacks on positions of ATO forces along the whole demarcation line in the period from 6PM till midnight, July 8, the ATO press-centre posted on Facebook.

In particular, terrorists conducted saturation attacks on Ukrainian troops near Krymske, Lugansk region, with 120- and 82-mm mortars at 7.30PM, which lasted 2 hours.

7 enemy UAVs were observed over the Lugansk region in the period between 9.25PM and midnight.

The village of Granitne, Mariupol direction, was shelled from 3.50 till 4AM with BM-21 Grad MLRSs.

Two people - a police officer and Ukrainian service member - have been wounded as a result of rebel attacks on the Lugansk region, Chairman of the Lugansk Regional State Administration Gennady Moskal reported on his webpage on Thursday.

He also added that Stanyzia Luganska had been assaulted once again on Wednesday night by so-called PRL rebels. Gunmen fired grenade machine guns, mortars, and machine-guns on the town from their positions on the right bank of the Siversky Donets.

Apart from Stanyzia Luganska, further active hostilities were conducted in Krymske, Novoaydarsk district. A clash occurred near a tuberculosis dispensary at 7.30PM Wednesday, which lasted about an hour.

Skirmishes committing mortars were reported after midnight on the Bakhmutka highway a few kilometres away from Krymske. The village itself was not hit; however, a soldier sustained wounds as a result of fighting. A relative lull was reported in other traditionally troublesome flash points of the region; skirmishes and attacks had local nature there without any significant effects, the administration reports.