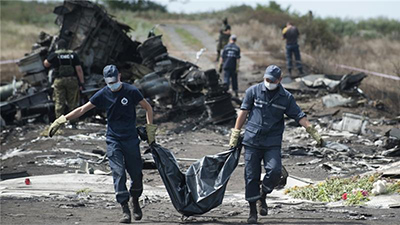 British Foreign Secretary Philip Hammond has called for a UN-backed international tribunal to prosecute those responsible for the downing of Malaysian Airlines flight MH17 over Ukraine a year ago, as memorial services were held to mark the anniversary of the incident.

"Justice must be delivered for the 298 innocent people who lost their lives," said Hammond, whose country is one of the permanent members of the UN Security Council.

"That requires an international tribunal, backed by a resolution binding all UN member states, to prosecute those responsible.

"Any attempt to undermine this process would deprive the victims of justice and cannot be tolerated."

Ukraine has blamed Russian-backed separatist rebels for shooting down the jet, while Moscow blames Ukraine.

The Netherlands, whose citizens made up the majority of those killed in the July 17, 2014 disaster, is working with Malaysia, Australia, Belgium and Ukraine on setting up an international court to bring prosecutions.

A draft UN resolution, obtained by the AFP news agency, calls for establishing the tribunal under Chapter Seven of the UN charter, which means the court's efforts to prosecute those responsible could be enforced by sanctions.

Poroshenko: Intelligence services report about a possible invasion of Ukraine

President Petro Poroshenko announced that, according to data provided by the Intelligence Service of Ukraine, aggressor's forces may invade the Ukrainian territory, CNN reports with a reference to his words.

"I have received information from Intelligence Services' sources that there may be an invasion", he said.

The President also stressed that a number of civilians had died on the night of July 15 during the escalation of hostilities in the ATO area.

"I lost 8 soldiers, 16 others were wounded. Several civilians also died as a result of shelling. And this is the reality of the Russian aggression in Ukraine," Poroshenko summarized.

Insurgents carried out around 60 attacks on Ukrainian troops in the past 24 hours, July 16, 40 of which took place in the period between 8PM and midnight, the ATO press-centre posted on Facebook.

Terrorists fired weapons banned by the Minsk agreement 23 times during this period.

They continued to attack inhabited settlements. Avdiyivka was shelled with 152-mm artillery and tanks. The village of Opytne was mortared with 120-mm weapons.

Ukrainian military lines were repeatedly fired upon near Orikhove, Opytne, Novotoshkivka, and Avdiyivka. Pisky was shelled with 120-mm mortars.

Militants continued their provocative activities against ATO forces over the period from midnight till 6AM, July 17, with the most intense attacks near the settlements of Pisky, Schastya, Stanyzia Luganska, and Shyrokine. They fired 120-mm mortars on army positions situated close to Khimik at midnight.

"In accordance with Article 23 of the Vienna Convention on Consular Relations, the Ukrainian Foreign Ministry handed to the Russian side a note demanding that Russia’s Consul General in Odessa immediately leave the territory of our country," the SBU report says, not giving the consul’s name.

Chairman of the Security Service of Ukraine Vasily Gritsak said that the diplomat was expelled "because of conducting activity incompatible with his diplomatic status, as well as for violation of provisions of the Convention."

According to SBU, the diplomat has left Ukraine.

Militants mainly become active in the evening or at night, so that OSCE representatives would not be able to register violations of the Minsk agreements.

According to data provided by the Information Resistance Group, two thirds of attacks are carried out in the evening and at night, when OSCE patrols do not keep watch over the area, Dmytro Tymchuk writes.

Rebels repeatedly fired heavy armaments over the past 24 hours, namely 100- and 120-mm mortars and military hardware.

Opytne was bombarded with 120-mm mortars, and an area close to Avdiivka with 122-mm artillery. Gunmen committed to action tanks and ZU-32-2s near Krasnogorivka and Pisky.

In the Mariupol direction, they fired machine-guns near Shyrokine and in the area between Gnutove and Talakivka.

Rebel tanks moved to the Donetsk airport, and artillery in several other directions

Rebels have redeployed 6 tanks, 4 ACV-3s, 3 ICV-2s and one multi-purpose light-armoured towing vehicle to the Donetsk airport, the head of the Information Resistance Group, Dmytro Tymchuk, posted on Facebook on the morning of July 17.

- A 6 strong battery of 122-mm D-30 cannons turned up in an area to the east of Panteleymonivka;

- A battery of 122-mm Grad MLRSs was repositioned to Gorlivka;

- A number of artillery elements, such as 3 152-mm 2S3 Akatsiya SP artillery systems and 3 122-mm BM-21 Grad MLRSs were moved to Perevalsk and Frunze;

including the government-held territories of Donbass

The Verkhovna Rada has agreed to hold local elections on October 25 in the whole Ukraine with the exception of the Crimea and rebel-held areas of the Donetsk and Lugansk regions.

237 MPs voted in favour of this resolution.

The question whether to call local elections in the government-held territories of Donbass was the main subject for discussion, for the Committee had proposed not to do so.

No elections will be held in the rebel-held territories of the Donetsk and Lugansk regions.

No servicemen were killed, and 2 soldiers sustained wounds in the ATO area in the past 24 hours, a spokesman for the Presidential Administration on ATO issues, Andriy Lysenko, reported at a briefing.

According to his report, the soldiers were wounded near the Donetsk airport.

The situation in the Lugansk direction has somewhat worsened. Ukrainian troops successfully and with no losses repelled rebel commandos' attacks, who were attempting to cross the Siversky Donets near the village of Stary Aidar.

Two rebel UAVs were observed spying over the ATO area on Thursday.