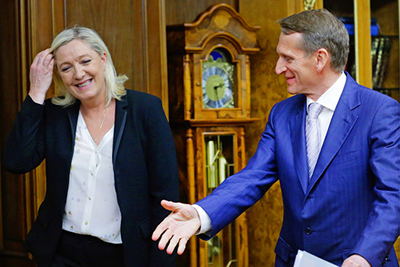 State Duma Deputy Speaker Sergey Naryshkin announced at a meeting with the delegation of French MPs that Ukraine had been annexing the Crimea for 23 years, "RIA Novosti" reports.

"I know that the vast majority of Crimean residents felt all those years, as if they lived in a foreign country and dreamed to join their historic motherland, Russia," Naryshkin stated.

As reported earlier, he also announced a while ago that the Federal Republic of Germany had annexed Eastern Germany.

According to reports, a group of pro-Russian French MPs was due to visit Russia and the annexed Crimea on Wednesday.

However, the Ukrainian Ministry of Foreign Affairs warned French deputies of possible exclusions, in case they decided to visit the occupied peninsula.

Rebels launched fire on resident quarters of Dzerzhinsk at around 8.30 PM, July 22, the Ministry of Internal Affairs in the Donetsk region reported.

A number of houses were damaged in Kaspiyska Street, and a 76-year-old man sustained shrapnel wounds, a statement reads.

The information about other possible damages is being ascertained.

The Pentagon is moving toward providing Ukraine with bigger, longer-range radar to help it counter artillery being used by Russia-backed rebels, as U.S. military officials signal a growing willingness to bolster the country’s defences.

The proposal still requires approval from the White House, which is considering another package of nonlethal assistance for Ukraine. The deliberations are taking place alongside rising pressure on Washington to better help Kyiv counter a rebellion that continues to regularly claim lives, despite a five-month-old ceasefire, according to The Wall Street Journal.

The administration decided early this year against sending Ukraine deadly weaponry, such as artillery or portable air-defence systems, for fear of escalating the more than year-old conflict or provoking Russia. But administration officials say that the new radar doesn’t count as offensive or lethal aid, and so wouldn’t require a policy shift. As reported earlier, 100 American military vehicles "Humvee" arrived in Odessa on July 18.

Rebels carried out 86 attacks on ATO forces and two shell strikes on residential areas, the ATO press-centre posted on Facebook.

In particular, 50 attacks were reported in the period between 6PM and midnight.

Terrorists launched an assault on the village of Novhorodske from their positions in Gorlovka. Gunmen shelled resident quarters for 40 minutes with 122-mm artillery systems.

Also, insurgents fired 122-mm howitzers and 120-mm mortars on positions of ATO forces near the village of Avdiyivka, Novgorodske, Pisky, Leninske, and Opytne.

A rebel sabotage and reconnaissance group of ten made attempts to infiltrate into one of ATO positions near Opytne.

As of 6 AM today, July 23, rebels fired 120-mm mortars on government forces stationed near the settlements of Rozsadky and Losove.

Army positions near the settlement of Maryinka came under mortar fire over ten times overnight.

Another Putin's humanitarian convoy invaded the territory of Ukraine

Motor transport columns of the Russian Emergency Ministry reportedly delivering humanitarian aid crossed the state border at 8.15AM, TASS reported with a reference to the press service of the Ministry of Emergencies of Russia.

"Customs clearance was carried out at two border check points, namely "Donetsk" and "Matviyiv Kurgan", in accordance with the established procedure, and all trucks crossed the border and continued their way through the territories of Donetsk and Lugansk regions," the REM asserted.

According to data provided by the ministry, more than 100 trucks are delivering over a thousand tons of humanitarian cargo to Donetsk and Lugansk. The vehicles are allegedly carrying food, medications, as well as living essentials.

It's already the 33rd Russian “humanitarian convoy” sent to Ukraine.

Border guards down a Russian drone on the border with Russia

The drone was spotted by border guards at a distance of 1.5 km away from the border in the direction of the Russian settlement of Ushakivka and the village of Herasymivka; the latter is situated in the Lugansk region.

"The officers of the Border Guard Service decided to fire into the drone in order to stop it collecting data on locations of the Ukrainian military," a statement reads.

After a thorough examination of the downed UAV, it turned out that it had been made in Russia.

For an economy that lives and dies by crude prices, the latest downturn in the world oil market means Russia’s recession may stretch into next year for the longest slump in two decades.

Russia’s first economic slump since 2009 looked like it would plateau as oil gained 40 percent from a six-month low in January. Crude’s recovery has faltered in recent weeks, raising questions about government assurances that the economy will return to growth in 2016 and further squeezing a budget already on course for its widest deficit in five years.

Oil jitters will test the optimism of President Vladimir Putin, who’s declared that Russia had put the worst of the economic crisis behind it, and heap pressure on his regime before early parliamentary elections in September next year. Russia, which ING Bank NV estimates needs oil at $80 a barrel to balance its budget, will endure a two-year economic contraction if crude prices remain at $60 through 2016, according to the central bank.

“Russia will face a recession or stagnation next year” if oil is near $50, Dmitry Polevoy, a Moscow-based economist at ING, said by e-mail. “It will likely be necessary to cut spending more, to postpone a part of military spending and to use what remains in the Reserve Fund.”

Reeling from a currency collapse last year and sanctions over Ukraine, the government has already cut budget outlays by 10 percent and dipped into one of its sovereign wealth funds, the Reserve Fund, to help cover the shortfall. Lower oil prices mean that Russia may potentially need financing from its other wealth fund, the National Wellbeing Fund, according to Polevoy.

The government predicts economic growth at 2.3 percent in 2016 after improving this year’s forecast to a 2.8 percent drop from a previously projected decline of 3 percent. Growth averaged 7 percent during Putin’s first two terms as president in 2000-2008.

Militants continue to redeploy equipment and reinforce their first line of defence, the head of the Information Resistance Group, Dmytro Tymchuk, reports.

"Forces and equipment of the terrorist brigade from the front line Mospyne-Komsomolske are moved straight to the first line. The Volnovakha direction is also being reinforced," Tymchuk added.

"Part of the forces has been redeployed to the south via Telmanove in order to support local tactical groups," Tymchuk said.

According to him, Donetsk rebels continue to build up equipment fleet in a number of army depots simultaneously.

"A group operating in the Avdiivka direction was reinforced too. Additionally, we recorded the redeployment of 2 batteries armed with 122-mm D-30 howitzers. Two tank companies comprised of around 20 tanks and several APCs and ICVs moved forward to an area to the east of Panteleymonivka," Tymchuk announced.

Another tank company of 7 accompanied by trucks with ammunition (4 vehicles in total) was repositioned toward Starognativka.

Insurgents have massed a great bulk of military equipment in Donetsk; two thirds of all armed provocations have been conducted there, a spokesman for the Presidential Administration on ATO issues, Oleksandr Motuzyanyk, reported at a briefing.

According to his information, Donetsk rebels continued to shell army positions up to the second defence line with mortars and artillery near Svitlodarsk. They fired even at daytime.

According to Motuzyanyk, the most complicated situation was reported in the north-east area of Donetsk. Two thirds of all breaches of the ceasefire were registered along the front line from Avdiivka to Maryinka.

A relative lull was observed in the Mariupol and Lugansk directions.

General Staff: 7 service members wounded in the ATO area in the past 24 hours

No losses were reported in the area of the anti-terrorist operation in the past 24 hours, but five soldiers sustained wounds, a spokesman for the Presidential Administration on ATO issues, Oleksandr Motuzyanyk, reported at a briefing on Thursday.

8 rebel drones were observed over the ATO area on Wednesday. Another unmanned penetrator was spotted in the Sumy region.