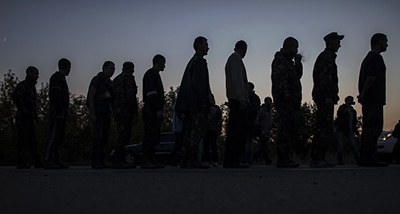 The Security Service of Ukraine says around 200 Ukrainian citizens are held hostages by terrorists, a newly appointed advisor to the chairman of the SSU, Yuriy Tandit, announced at a press briefing on Friday.

According to him, this number is only approximate since the Centre for Freeing of Hostages constantly receives updated information.

"We are talking about approximately 200 people, 65 of whom are civilians, and the rest are servicemen of the Armed Forces of Ukraine, the National Guard and volunteer battalions," he said.

According to Tandit, the Centre for Freeing of Hostages set up by the Security Service of Ukraine has recently found out about 11 Ukrainian citizens, who had been illegally transferred abroad; however, the Security Service believes that, in total, around 30 Ukrainians have been conveyed across to the RF so far.

78 attacks on ATO forces by PRD and PRL gunmen

with artillery and tanks in the past 24 hours

Pro-Russian outlawed units of gunmen conducted 78 assaults on army positions in the past 24 hours, July 23, 35 of which in the period between 6PM and midnight, the ATO press-centre reports.

Russian terrorists shelled residential areas of the village of Novgorodske from their positions in occupied Gorlivka with tanks at 9.30PM.

Rebels are forming two large striking forces in Donbass to be able to go on the offensive in the Volnovakha and Mariupol directions, MP Dmytro Tymchuk reported with a reference to the operational data.

"In accordance with the opinion of the IRG based on the operational data, terrorists are forming two large tactical task forces at the moment: one is being set up in the Volnovakha direction (to the south of Donetsk) along the line from Olenivka and Granitne to Staromarivka. The other tactical force is formed in the Mariupol direction and slightly to the north from Bezimenne to Pavlopol and Chermalyk," he informed.

According to the IRG, the tensest situation is at the moment in the Donetsk and Gorlivka directions, where "the largest amount of rebel shell strikes and armed provocations is recorded.

Medvedev scares Ukraine with the fate of Yugoslavia

Prime Minister of Russia Dmitry Medvedev said that Ukraine "has to show flexibility and either give the South-East greater autonomy or disappear, similarly to Yugoslavia, according to his interview with the Slovenian RTV, as reported by the press service of the RF Cabinet.

“The Ukrainian crisis can be resolved only in Ukraine by the Ukrainians,” he stated.  “Neither the Russian Federation, nor the European Union, nor the United States, but only by the Ukrainians must do it. They need to sit down and agree on things. The authorities should show flexibility within the framework of the Minsk Agreements and take the decisions that they must take, including the ones relating to the autonomous republics in south-eastern Ukraine. Of course, the self-defence units and political forces in south-eastern Ukraine should show willingness to compromise and reach an agreement with the Ukrainian authorities. Only then will peace come to the Ukrainian land. Perhaps, this is the most important thing to do, because if it doesn’t happen, we will witness a very sad process. It is already sad, but it could take on very dramatic proportions.”

Then he resumed, “I think most young people will struggle to remember that Yugoslavia was ever on the map of Europe.”

“I bring up Yugoslavia only because I hope that someday we won’t have to remember that there used to be a state called Ukraine, as with Yugoslavia,” Medvedev asserted.

“The UN Security Council unanimously adopted Resolution 2166 which demanded that “those responsible for this incident be held to account and that all States co-operate fully with efforts to establish accountability”. The law enforcement authorities of Australia, Belgium, Malaysia, the Netherlands and Ukraine are working together in a Joint Investigation Team to conduct an independent criminal investigation into the downing of the flight, with the assistance of all relevant countries.

Now, as the public prosecutor in charge has signalled that the independent criminal investigation could be completed before the end of this year, our countries have asked the UN Security Council to swiftly establish an international criminal tribunal under Chapter VII of the UN Charter to try those responsible for this crime. Such a tribunal would ensure the highest levels of transparency, impartiality and accountability. It would deliver justice to the families of all victims of MH17. It would ensure broad international support and maximise the potential for international co-operation. Further it would oblige all states to co-operate fully with the International Tribunal and its bodies.

A year ago, the Security Council unanimously adopted Resolution 2166, thereby acknowledging the threat this incident posed to international peace and security. It also agreed to remain seized of this matter. We call upon its members to fulfil their responsibility and fight impunity for such acts of violence. We must secure justice for the victims of MH17 and their next of kin and prevent such a tragic event from ever happening again.

NYT: Russia wants to influence the investigation into the Boeing crash

Russia on Monday introduced a U.N. resolution demanding that those responsible for shooting down a Malaysia Airlines plane over Ukraine last year be brought to justice — but eliminating the international tribunal that the five countries investigating the crash are seeking to prosecute the perpetrators.

Russia said earlier this month it opposed a draft submitted by Malaysia on behalf of the five countries that would establish an international court.

The five countries — Malaysia, Ukraine, Netherlands, Australia and Belgium — reiterated in a joint statement Monday that a year after the Security Council demanded accountability for those responsible for the crash it's time to establish a tribunal.

The rival Russian draft resolution, obtained by The Associated Press, expresses concern that the investigation isn't ensuring "due transparency in its organization and work methods, which may have a negative impact on its outcome."

Ukraine and the West suspect Flight MH17, traveling from Amsterdam to Kuala Lumpur, was destroyed by a surface-to-air missile fired by Russian soldiers or Russia-backed separatist rebels, on July 17, 2014 killing all 298 people on board.

Moscow denies that and Russian officials and state media have alleged the plane was shot down by a Ukrainian missile or warplane.

1 military died, and 3 others were wounded in the area of the anti-terrorist operation in the past 24 hours, a spokesman for the Ukrainian National Security and Defence Council, Andriy Lysenko, reported at a briefing on Friday.

He also added that according to the ascertained data one officer of the MIA special unit had died near Avdiyivka on July 22 and another one had been wounded.