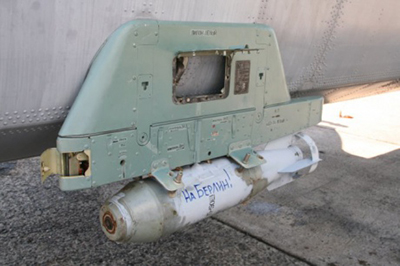 Bild: Russian Air Force training to drop bombs with the inscription "On Berlin!"

Pilots were trained to drop bombs with the words "On Berlin!" and "For Stalin!" as part of a drill conducted in early August 2015 in the Kaliningrad region, the German newspaper Bild reports.

The publication notes that the military exercises were held just 500 kilometres from the German capital. Bild referred to the information published by the Central Navy Portal Flot.com, which had previously released those photos. According to Flot.com, military transport plane AN-26 practised bombing for the first time in twenty years. The slogans “On Berlin” and “For Stalin” written on bombs were widely popular in Russia during the WWII.

with Grad MLRSs and mortars

Insurgents continue to shell army positions in the ATO area with weapons banned by the Minsk agreement, the ATO press-centre posted on Facebook.

Ukrainian troops were bombarded with 120-mm mortars in the period from 6 PM till midnight, August 11, in Novgorodske, Pisky (twice) and Avdiyivka. Terrorists fired 152-mm artillery on Krasnogorivka at around 9PM.

Gunmen attacked the settlements of Starognativka and Chermalyk situated near Mariupol at 7PM with 152-mm artillery and 120-mm mortars.

They also carried out two attacks on government forces in Krymske at 8PM with mortars, grenade launchers and machine-guns. In the Artemivsk direction, the village of Zaitseve was shelled at 11PM with 120-mm mortars.

After midnight, rebels were active only in the Donetsk region. The settlements of Vodyane, Opytne, Pisky and Novoselivtsi were bombarded at about 1AM with BM-21 Grad MLRSs.

Militants fired all types of weapons, which they had at their disposal at the first line of defence, including rocket artillery, in the past 24 hours, according to the operative data provided by the Information Resistance Group and made public by Dmytro Tymchuk.

The IRG informs that the recent escalation in Donbass sparked by an abrupt intensification of Russia’s military activities under the pretext "of preventive strikes" aimed at disrupting the mythical "offensive of government forces" ahead of the Ukrainian Independence Day".

"Terrorists simultaneously committed all weapons available, namely various types of military hardware and artillery, including rocket artillery, in a number of sectors both in the Lugansk and Donetsk regions,” Tymchuk wrote.

Lull in the fighting reported in the Lugansk region; one serviceman wounded

A relative lull in the fighting has been reported in the Lugansk region; however one soldier has sustained wounds, the press service of the Lugansk Regional State Administration reported.

Active hostilities were recorded only in the Stanytsia-Luganska district.

"In particular, the villages of Bolotene and Syze, Stanytsia-Luganska district, were mortared by insurgents at night. The district centre itself was attacked by gunmen with machine-guns," the LMCA said.

"A soldier of the 128th brigade of the Armed Forces of Ukraine was wounded at a roadblock as a result of shelling," a report reads.

The losses suffered by the Russian army in Shyrokine near Mariupol have totalled to about 800 people, Commander of the Azov Battalion and Ukrainian MP Andriy Biletskiy said in an interview with LigaBusinessInform.

According to him, Russia presses for the "demilitarization" of Shyrokine in order to obtain a convenient platform for assuming the offensive against Mariupol, in case the situation gets worse.

"If they do not have Shyrokine, they will struggle for a long time before they reach Mariupol. Therefore, it is understandable, why Russia insists on the demilitarization of Shyrokine. Russia applies pressure on the West, and the West does the same thing towards Poroshenko. So, the issue of demilitarization is purely a foreign policy issue, and by no chance a military or strategic one," he said.

The military situation in the Mariupol direction was escalating, a spokesman for the Presidential Administration on ATO issues, Andriy Lysenko, reported at a briefing on Wednesday.

According to him, the epicentre of the confrontation is situated along the front line in the area between Bogdanivka and Starognativka. Heavy armaments are systematically fired here by gunmen.

"In particular, the enemy carried out 4 attacks with rocket artillery  in the period between 1 and 3 o'clock AM, one of which with powerful Uragan MLRSs. Insurgents fired 152-mm howitzers both in the daytime and at night," Lysenko noted.

Militants have drawn up additional heavy artillery to Starognativka, according to the operative data provided by the Information Resistance Group.

Also, a battalion of BM-21 Grad MLRSs (6 units) was spotted on the march near Starobeshevo.

As reported earlier, rebels made an unsuccessful attempt to develop the offensive on Monday, but were thrown back and incurred massive losses.

1 military died, and 3 others were wounded in the area of the anti-terrorist operation in the past 24 hours, a spokesman for the Presidential Administration on ATO issues, Andriy Lysenko, reported at a briefing on Wednesday.

Also, 12 rebel drones were recorded over the ATO area on Thursday. Another Russian UAV crossed the border separating the Crimea and the Kherson region near Chongar.