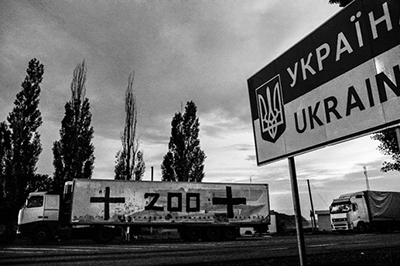 for taking dead bodies out of the ATO area

Pro-Russian militants do not allow a corridor for the Ukrainian 'Black Tulip' volunteer organization to take out Ukrainian soldiers' dead bodies from the Donbass conflict zone, Yaroslav Zhylkin wrote on Facebook.

"Well, apparently something is going to happen there, we haven't been given a corridor," he wrote.

Zhylkin said it was not a typical situation for volunteers.

"It has rarely happened to us. Even during the siege of the Donetsk airport and in Debaltseve, we still were able to get there," he said.

As reported earlier, Black Tulip has taken out of the occupied territories more than 600 dead bodies over the course of the year. This work was carried out fully at the cost of volunteers and funded with the money coming from donations. The state did not provide any funds for searching and identifying soldiers in 2014-2015.

Russia sends yet another humanitarian convoy to Donbass

A new humanitarian aid convoy from Russia is traveling towards the state border with Ukraine, a source from the Russian Ministry for Emergency Situations has told TASS.

The convoy left the Don Rescue Centre of the Emergencies Ministry - in the Ukraine-bordering Rostov region - at 4 am, Moscow time, heading to the state border.

The 35th humanitarian convoy of more than 100 trucks is carrying food, medicines and items of first necessity to the eastern Ukrainian Donetsk and Luhansk regions.

At the state border it will split into two equal parts, one of which will head to the Donetsk region, and another one to the Lugansk region, TASS reports.

As reported earlier, Russia violates international law by sending "humanitarian aid" to Ukraine. Ukrainian border guards and representatives of the Red Cross say that they have no opportunities to check the trucks delivering things to Ukraine.

Ministry of Internal Affairs: 19 civilians died in the M Sector since fighting broke out

19 civilians, including 4 children, have died in the M Sector (the Southern direction) since hostilities broke out, the Ministry of Internal Affairs in the Donetsk region reported.

"Since the outbreak of fighting at the demarcation line in the M Sector, 19 civilians have been killed, including 4 children, and 54 others wounded, including three children," a statement reads.

For instance, two people died, and six others were wounded in the village of Chermalyk.

Five people have died including two children, and five others have been wounded in the village of Granitne, since August 2014. According to the village council, 10 local people have been killed by rebel shells, and 35 others wounded, since the ATO operation was launched.

One person died and three others were wounded in the village of Pavlopil.

Three people died, including two children, and two others sustained wounds in the village of Lebedynske. According to the chairman of the Lebedynske rural council, in total, three people have been wounded since the fighting broke out.

Three civilians died, and three others were wounded in the village of Shyrokine.

Militants significantly intensified assaults on ATO positions over the past 24 hours, the ATO press-centre posted on Facebook.

Terrorists bombarded Ukrainian strongholds in the villages of Talakivka, Pavlopil, Starognativka, located near Mariupol, with BM-21 Grad MLRSs at around 10PM.

The settlement of Novotroitske was bombarded twice with 120-mm mortars in the period from 6PM till midnight.

Terrorists fired Grad MLRSs on Avdiyivka and Opytne from 11PM till midnight.

In the Artemivsk direction, terrorists carried out attacks on army positions in the village of Zaytsevo at app.10PM with mortars and 152-mm artillery.

"Gunmen attacked Shyrokine with grenade launchers and large calibre machine-guns at 5.10PM, and Avdiyivka and Opytne with Grad MLRSs at 9.52PM," the headquarters reports.

In total, rebels breached the ceasefire 95 times in the past 24 hours.

Rebels conducted 9 attacks with artillery banned by the Minsk agreement in the period between midnight and 6AM, August 14. ATO forces stationed in Vodyane and Opytne were bombarded 4 and 3 times respectively. Krasnogorivka and Zaytsevo also came under artillery fire.

Donbass rebels not only have intensified artillery attacks on ATO forces but also have switched to the active use of sabotage and reconnaissance groups according to the operative data provided by the Information Resistance Group and released by Dmytro Tymchuk.

"A remarkable activity of rebel SRGs was recorded near Avdiivka, Maryinka, and at the Svitlodarsk foothold, in the Mariupol direction, as well as in the Schastya-Stanyzia Luganska direction," the IRG reports.

Moreover, gunmen carried out reconnoitring activities with the help of technical means, including drones.

Turchynov: Martial law to be imposed in case of further Russian aggression

He made this comment when on a visit to the Kyiv armour plant on Friday, Interfax-Ukraine reports.

"I want to say: If Russia decides to hamper the Minsk agreements (unfortunately it does everything possible for this), of course, we will act according to the challenges our country may face, " he announced.

"If Russian troops go on the offensive, we will be certainly forced to impose martial law and mobilize all potential available in the country,” Turchynov said.

NSDC Secretary also added that the situation in the ATO area was very tense, as Russian and terrorist forces were massing near the confrontation line and the number of attacks on government troops was increasing.

According to Turchynov, all this affirms that Russia is going to hamper the Minsk agreement and to develop the offensive.

Two activists arrested in the occupied Crimea for the Ukrainian flag

"Repressions against non-contents are carried out in the Crimea. Representatives of the Ukrainian Cultural Centre were arrested in Simferopol on August 12. According to officials, they were detained (Just think about it!) because of a photo with the Ukrainian national flag! Where's the law? Where is justice?" he resented on Facebook.

Shukurdgiev wrote later that he and Kopylova had been released after questioning.

The enemy continues to conduct standoff attacks on Ukrainian strongholds with heavy armaments, a spokesman for the Ukrainian National Security and Defence Council, Andriy Lysenko, reported at a briefing on Friday.

According to him, rebels commit howitzers and heavy mortars along a broad section of the front from Novotroitske to Talakivka both in the daytime and at night. They assaulted our troops defending Novotroitske late in the evening. Gunmen fired mortars deployed to Dokuchayevsk.

The enemy carried out three attacks on ATO positions near Starognativka with 152-mm artillery and fired Grad MLRS (40 shells) on them in the evening.

Rebel howitzers and Grad systems fired on government-held territories near Pavlopol and Orlovske.

The enemy attacked our positions to the east of Talakivka, simultaneously carrying out saturation attacks with mortars, howitzers and rocket artillery.

US experts: Large-scale invasion of Donbass by Russian troops is highly unlikely

Talk of renewed fighting in eastern Ukraine is escalating, as are the tactical movements fuelling concerns. Negotiations remain troubled, and despite communications between Kiev, its Western backers, separatists and Russia, hostility remains. The political status of the separatist regions and Moscow's broader regional imperatives continue to prevent true tactical de-escalation on the battlefield. Though violence never really disappeared, even after several cease-fire agreements that included the withdrawal of weaponry, both sides now appear to be increasing their ability to conduct armed operations again. Stratfor still does not foresee Russia engaging in a large military operation in Ukraine. However, the current instability and higher concentration of forces on the demarcation line may rekindle fighting with limited offensive operations in the coming weeks.

Over the past few days, Ukraine has signalled that it is increasing its retaliatory use of artillery fire against the pro-Russian separatist forces along the front line. The Minsk agreements initially required heavy artillery over calibres of 100 mm to withdraw from the demarcation line. While heavy artillery did withdraw for a time, activity by these artillery systems has steadily grown over the past few months. Ukraine's inability to enforce the withdrawal and its hesitation to settle the political status of the separatist regions have forced Kiev to move its artillery back to the front line and respond to continued cease-fire violations with its own firepower.

1 military died, and 6 others were wounded in the area of the anti-terrorist operation in the past 24 hours, a spokesman for the Ukrainian National Security and Defence Council, Andriy Lysenko, reported at a briefing on Friday.