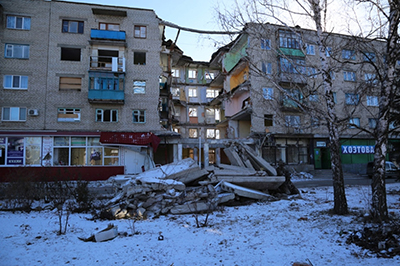 to de-escalate the Donbass conflict

Seriously alarmed by the recent escalation of violence in eastern Ukraine, which has reportedly resulted in the death of civilians on both sides of the contact line, United Nations Secretary-General Ban Ki-moon today called all parties to end hostilities and resume talks.

“He also calls on all sides to take urgent steps to de-escalate the current situation and prevent a spiral of violence that will lead to more deaths, human suffering and destruction of infrastructure and negatively affect regional stability,” BBC-Ukraine reports with a reference to the UN press service.

“They are equally asked to provide unrestricted and unconditional access for critical humanitarian assistance, and freedom of movement for civilians throughout the country, “in order to address a deteriorating humanitarian situation,” he said

Rebels have significantly decreased the number of attacks on Ukrainian positions and  fired mainly machine-guns, the ATO press-centre posted on Facebook.

They shelled Ukrainian strongholds in Krasnogorivka and Berezove near Donetsk with 120-mm mortars. The village of Maryinka was assaulted with grenade launchers, heavy machine-guns, and machine-guns. Avdiyivka was bombarded twice with 122-mm artillery and mortars.

Moreover, rebels carried out attacks on positions of ATO troops in the villages of Hornyak, Nevelske, and Krasnogorivka with 152-mm artillery.

Army positions in Starognativka near Mariupol were mortared at 6.45. Furthermore, insurgents shelled this residential area with rocket artillery.

In the Artemivsk direction, the village of Luganske came under terrorist attack.

In total, insurgents breached the ceasefire 86 times in the past 24 hours. They fired artillery 12 times, mortars - 27 times, grenade launchers and machine-guns - 52 times.

Rebels conducted rare attacks with machine-guns after midnight in the Donetsk direction.

Nearly 40 UN members agree to abolish the right of veto

Nearly 40 countries supported the initiative of Paris regarding the voluntary renunciation of the use of the veto in the United Nations, in cases where it is necessary to take urgent measures to stop the massive crimes, a Deputy Foreign Ministry spokesman said responding to a question of Ukrinform.

"French initiative on regulation of the veto in cases of mass atrocities has found a very wide response in the United Nations and the international community. Nearly forty countries have officially expressed their support at the last meeting of the United Nations and many others are showing interest, “the diplomat said.

According to him, the decision may be taken in September. "We are actively discussing this issue, in particular in connection with the 70th anniversary of the United Nations in September, as a further step in mobilizing the international community," Jorginho said.

A 5-month-old child has been wounded in artillery attacks on Maryinka, the press-service of the Donetsk police department reported.

"Terrorists started shelling resident quarters of Maryinka at about 1AM. One of shells went off in the suburbs in Ordzhonikidze Street, where a family with a 5-month-old child lived,” the Interior Ministry reported.

The girl sustained shrapnel wounds in her stomach, and was immediately sent to Dnipropetrovsk for a surgery. Child's parents were not hit.

The information on other casualties and damages is being ascertained.

Rebels have continued to escalate the conflict in the Lugansk region, the press service of the Lugansk Regional State Administration reported on Tuesday.

The settlements of Stanyzia Luganska, Krymske, Valuyske and the area near the Vilkhova railroad station were intensively shelled. Stanyzia Luganska was bombarded with 122-mm artillery and SP artillery systems in the period from 9.15 till 2.15AM.

The village of Valuyske was attacked with heavy armaments resulting in six houses damaged.  A gas pipe near the Vilkhova railroad station was completely smashed, leaving 506 people without gas.

The village of Krymske also came under artillery attack. Fortunately, there were no casualties reported there

Kravchuk: Russia is the most dangerous state for the world

The first president of Ukraine, Leonid Kravchenko, believes that today's Russia will not maintain any international commitments and poses a great danger to the world according to his interview with "Novoye Vremya" (New Times).

At the same time, he believes that Russia will have to change its policies.

"War is their living standard. If the West realizes this and starts looking into the matter differently, then everything will be back in its place. And people, who cheer Putin today being entranced with the [annexation] of Sevastopol and the Crimea, will live tomorrow being same entranced, but without the Crimea and Sevastopol," Kravchuk believes.

General Staff: 1 fighter killed, and another one wounded

1 military died, and another one was wounded in the area of the anti-terrorist operation in the past 24 hours, a spokesman for the Presidential Administration on ATO issues, Colonel Oleksandr Motuzyanyk, reported at a briefing on Tuesday. ATO forces suffered these losses near Donetsk.

According to Motuzyanyk, a decrease in the intensity of hostilities was observed in the whole area of confrontation, especially in Gorlivka. The total number of attacks did not exceed 100 cases for the first time in last three days.

The ATO spokesman noted that a lack of ammunition in rebel camps may be a reason to explain this".