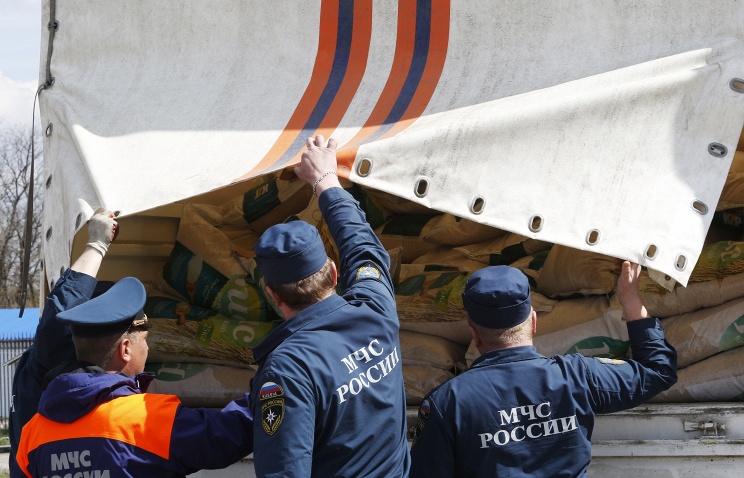 Yet another "humanitarian convoy" to Donbass

"Russian Emergencies Ministry’s convoys arrived in Donetsk and Lugansk with humanitarian cargo. The trucks are currently being unloaded at storehouses," the press service announced. Once unloaded, the trucks will leave the territory of Donetsk and Lugansk and return to Russia.

This is the 36th humanitarian convoy since August 2014.

As reported earlier, Russia violates international law by sending "humanitarian aid" to Ukraine. Ukrainian border guards and representatives of the Red Cross said that they had had no opportunity to check the trucks delivering this aid to Ukraine.

The number of rebel attacks in the ATO area has been decreasing for a couple of days, the ATO press-centre posted on Facebook.

Rebels were especially active in the Donetsk direction. They carried out regular attacks on Ukrainian positions in the settlements of Maryinka, Opytne, and Pisky with grenade launchers, small arms, and heavy machine-guns in the period between 6PM and midnight. ATO troops stationed in Krasnogorivka were bombarded twice around 7PM with 82-mm mortars. Moreover, Ukrainian strongholds in Opytne were assaulted with ICVs.

Ukrainian servicemen in the village of Schastya, Lugansk region, were attacked by gunmen with grenade launchers and SP artillery systems at about 8PM.

In total, insurgents breached the ceasefire 67 times in the past 24 hours. They fired artillery twice, mortars 15 times, rocket artillery once, grenade launchers and small arms 65 times.

Lebedynske near Mariupol comes under fire at night

Insurgents carried out saturation attacks on the village of Lebedynske situated near Mariupol at 00:27 Thursday, August 20, the M sector told the official Mariupol page 0629.

The attack lasted around 40 minutes. Blasts were heard in Mariupol.

The information on casualties among servicemen is ascertained.

In general, 5 assaults were recorded in the M sector over the past 24 hours. Militants fired mortars, small arms and grenade launchers.

4 military died, and 14 others were wounded in the area of the anti-terrorist operation in the past 24 hours, a spokesman for the Presidential Administration on ATO issues, Oleksandr Motuzianyk, reported at a briefing.

Surprisingly, no UAV's were recorded over the ATO area on Wednesday. One Russian drone was spotted by Kherson border guards near the Ukrainian border with the occupied Crimea.