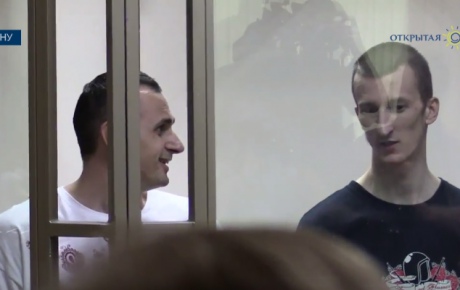 AND KOLCHENKO TO 10 YEARS IN PRISON

The military court in Rostov-on-Don has sentenced Ukrainian film director Oleg Sentsov and Ukrainian activist Oleksandr Kolchenko to 20 and 10 years in prison respectively; both were accused of terrorism and will be jailed in a high-security colony.

As reported earlier, Ukrainian film director Sentsov and pro-Ukrainian activists Oleksandr Kolchenko, Oleksiy Cherniy and Gennadiy Afanasyev were arrested by Russian security service officers in the annexed Crimea in May 2014. They all were charged with preparation for terrorist acts.

The prosecutor demanded that Sentsov be sentenced to 23-year and Kolchenko to 12-year imprisonments in a penal colony.

There are serious concerns regarding the two men’s rights to a fair trial. Oleg Sentsov has complained that he was tortured when detained by the Russian Federal Security Service (FSB), as has one of the prosecution’s witnesses against the two men. [...]

The main evidence for the prosecution is the statements of three witnesses. However, two of them, Aleksey Chirny and Gennady Afanasyev, who have already been sentenced to seven years each in connection with the case, have both refused to testify in court. Aleksey Chirny referred to his right not to testify against himself. His lawyer had earlier alleged that his client had been ill-treated and promised a lighter sentence if he pleaded guilty and incriminated others. The lawyer was removed from the case. Gennady Afanasyev refused to testify on 31 July on the grounds that he had been forced into making incriminating statements. A third witness is a police informant who provided fake explosives to blow up the Lenin statute and the Eternal Flame monument.

in connection with the Russian aggression in Ukraine

Air Force Chief of Staff General Mark Welsh James said the F-22's inaugural training deployment in Europe would allow U.S. forces to train with NATO partners across Europe, testing the ability of the jets to communicate and fight together with the Eurofighter, and other advanced warplanes.

James said the deployment would give F-22 pilots more experience with the European terrain. The Air Force has previously deployed the jets in Japan and South Korea.

Welsh said it would also allow the jets to fly into and out of facilities that could be used in some future conflict.

Militants attack Sopyne and Avdiyivka, the latter has no electricity

Rebels shelled Sopyne near Mariupol and Avdiyivka on the night 24 to 25 August, Donbas News announced. It also reported that Avdiyivka lost power as a result of the attack on the town.

According to him, the attack lasted a few minutes. The enemy fired 152-mm SP artillery systems.

The enemy fired over 100-mm weapons several times at the end of the day, August 24, and the total number of rebel ceasefire violations accounts for 77 cases. They fired artillery three times, mortars 20, and grenade launchers 32 times, the ATO press-centre reports.

Gunmen shelled ATO forces in Krasnogorivka three times in the period from 6PM till midnight.

They also carried out an attack on a Ukrainian stronghold in Opytne at 9 o'clock with tanks, SP artillery and small arms.

Moreover, terrorists mortared civilians' dwelling houses in the village of Krasnogorivka from 6.30 till 7.06PM.

Civilian quarters of Avdiyivka were shelled with 122-mm artillery at 10.20PM.

An ATO stronghold in the village of Schastya, Lugansk region, came under mortar fire at 9.30PM.

In the Artemivsk direction, insurgents carried out attacks on the settlements of Luganske, Troitske, Mayorsk, and Sanzharivka yesterday evening with small arms.

Meanwhile, no rebel armed provocations were recorded near Mariupol in the period between 6PM and midnight.

2 military died, and 9 others were wounded in the area of the anti-terrorist operation in the past 24 hours, a spokesman for the Presidential Administration on ATO issues, Oleksandr Motuzianyk, reported at a briefing on Tuesday.

ATO forces suffered losses in the B sector, Motuzianyk said.

According to the ATO spokesman, the situation around the city of Donetsk is "invariably the most difficult".