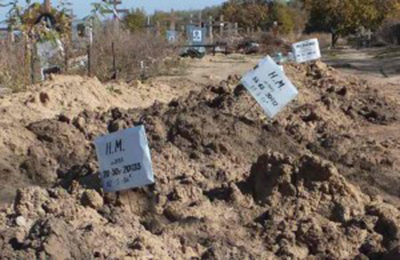 that thousands Russian soldiers had perished in Ukraine

The Russian government foresaw in the budget for 2015 benefit repayments to Russian servicemen killed or wounded in Ukraine, as well as payments of day's military wages to "fighting" contractors, the Russian site "Business life" wrote in mid-March; but this publication attracted most of the media attention only now.

Business Life (Delovaya Zhizn) reports on markets, finance, entrepreneurship, finance, and leisure, scarcely an outlet for sensational information. Its innocuously entitled “Increases in Pay for Military in 2015,” however, reveals what appear to be official figures on the number of Russian soldiers killed or made invalids “in eastern Ukraine.”

As it is well known, the Russian authority refuses to recognize the presence of its troops in Ukraine.

Gunmen carried out two attacks on our positions in Opytne and one on a Ukrainian stronghold in Pisky with 120-mm mortars. ATO forces in Avdiyivka were shelled with 122-mm artillery.

Ukrainian defensive lines in Troitske were bombarded with 152-mm artillery and grenade launchers, and Maryinka came under 122-mm artillery attack at about 9 o'clock.

Also, the village of Novosellivka Druga came under mercenary fire in the evening.

In the Mariupol direction, army positions in Starognativka were mortared at about 7 o'clock PM. An enemy sabotage and reconnaissance group tried to turn Ukrainians' flank at 7.50PM near Novotroitske. The gunmen were forced to retreat.

Moreover, Ukrainian troops in Stanyzia Luganska were shelled with grenade launchers, mortars and heavy machine-guns several times in the past 24 hours.

The sentencing of two citizens of Ukraine, namely Oleg Sentsov and Alexander Kolchenko, announced by the Russian court has contradicted PACE requirements voiced towards the Russian Federation, and manifested in resolution 2063, a statement of PACE President Ann Brasseur reads.

“The sentencing of Oleg Sentsov and Oleksandr Kolchenko on charges of terrorism, respectively to 20 and 10 years in prison, appears to be manifestly excessive and raises concerns about respect for the standards of the European Convention on Human Rights in the legal proceedings against them, especially in the context of the deterioration of the human rights situation in Crimea since its illegal annexation by the Russian Federation,” said the President. “In Resolution 2063 (2015) the Assembly called on the Russian authorities to ‘reverse the illegal annexation of Crimea’ as well as to ‘release all captives, in particular civilians and including captives held in the Russian Federation’. Today’s Court decision is in manifest contradiction with these demands. Therefore, I urge once again the Russian authorities to live up to their commitments as a member state of the Council of Europe and release all persons illegally detained following the annexation of Crimea.”

The Times: Russian population will have shrunk by half by 2050

The population of Russia may be halved before 2050, the Times wrote with a reference to Director of the Institute of Demography, Migration and Regional Development Yury Krupnov.

Russia’s population is forecast to almost halve within a generation as deaths from suicide and alcoholism escalate and the birth rate falls against a background of economic decline.

The number of Russians could shrink from 143.5 million to 80 million by 2050 unless the government takes urgent action, according to Yury Krupnov, the head of the Institute for Demography, Migration and Regional Development.

Low incomes even in regions close to Moscow plus widespread pessimism over the future meant that young people were reluctant to start families, he said.

The World Bank’s Board of Executive Directors today approved a US$500 million IBRD loan to finance the Second Multi-Sector Development Policy Operation in Ukraine. This new financing supports a number of high-priority structural and macroeconomic reforms to improve the country’s public sector governance, business environment, energy and social assistance.

“The package of reforms supported by this operation will help address the deep-rooted structural problems that have contributed to Ukraine’s current economic crisis,” said Qimiao Fan, World Bank Country Director for Belarus, Moldova, and Ukraine. “We are helping Ukraine to implement an urgent set of measures, which will be essential to stabilize the economy, provide quality services to all Ukrainians and return the country to a sustainable growth path.”

In particular, reform measures supported by this loan – the second in a series of two – will promote good governance, transparency, and accountability in the public sector. The loan ensures that scarce public resources will be used effectively to provide quality public services at a crucial time. At the same time, the operation will support efforts to strengthen the regulatory framework and reduce the cost of doing business. This should help unleash the private enterprise and help create sustainable and good quality jobs for Ukrainians. Finally, this operation will assist the authorities to continue reforming inefficient and inequitable utility subsidies while protecting the poor from tariff increases by strengthening social assistance.

This operation is part of the World Bank Group’s broader financial support package announced in February this year, which aims to provide Ukraine with up to US$2 billion in 2015. The US$750 million First Multi-Sector Development Policy Loan was disbursed in May 2014.

Tymchuk: Militants call to the colours threatening with military executions

"5 thousand guerrillas were additionally relocated to Donetsk from other echelons within several hours yesterday." The main part of them was mercenaries recruited from Russian citizens," he posted in Facebook on the morning of August 26.

"A battery of 203-mm 2S7 "Peony" self-propelled heavy guns (in total 5 units) arrived in the Kyiv district of Donetsk City. Additionally, about 15 petrol tankers came to Donetsk, and three T-80 tanks were delivered to the city by trucks from the Russian Federation," Tymchuk adds.

A mechanized rebel infantry battalion reinforced by two armour companies  was redeployed to Yenakiyevo and Vuglegirsk, namely 20 ICV-1s and 2s, as well as 9 APC-70s and 80s, and 6 tanks were observed In Yenakiyevo; furthermore, 10 tanks were seen driving into Vuglegirsk.

According to the IRG, enhanced mobilisation measures are conducted in the PRL and PRD.

"Young people are massively leaving Debaltseve and Vuglegirsk in order to escape from being called-up," Tymchuk announced.

"About 500 personnel were moved from the RF to Lugansk. All those gunmen were trained in a training centre of the CIA MF of the RF in Rostov-on-Don (Russia)," he writes

The Ministry of Justice brings in the fourth action against Russia

Ukraine's Justice Minister Pavlo Petrenko has said that the fourth lawsuit against Russia has already been sent to the European Court of Human Rights (ECHR).

"We sent it half an hour ago," Petrenko said when asked by journalists.

Earlier on Wednesday, Ukrainian Prime Minister Arseniy Yatseniuk said that Ukraine would send another lawsuit against Russia to the ECHR regarding Russia’s violations of the rights of Ukrainian citizens Oleh Sentsov and Oleksandr Kolchenko.

2 Ukrainian military died, and 10 others were wounded in the area of the anti-terrorist operation in the past 24 hours, a spokesman for the Presidential Administration on ATO issues, Andriy Lysenko, reported at a briefing.

Also, 5 rebel drones were recorded over the ATO area on Tuesday.

As reported earlier, the "Defence of Mariupol" announced that army positions in the M sector had been assaulted 11 times in the past 24 hours resulting to date in two soldiers dead and five others wounded.