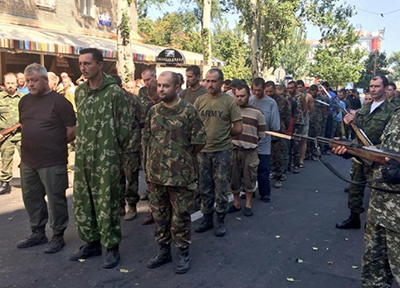 In turn, a Ukrainian presidential envoy for the peaceful settlement of the Donbas conflict and Ukrainian representative of the humanitarian subgroup within the trilateral contact group, MP Iryna Gerashchenko, said that among those freed from captivity there had been Ukrainian service members who had fought in the Ilovaysk battle and been captured by gunmen; they had spent in rebel captivity a year.

"One of those released wants to stay with his family in Gorlovka. Eleven soldiers will arrive in the government -controlled territory of Ukraine in a few minutes. Months of intense negotiations, the last round of which took place in Minsk and the Donetsk region yesterday, have ended successfully. The negotiations in Minsk weren't easy. But it was even harder for our colleagues – civil volunteers engaged in the process of freeing, - for they came under attack yesterday," Gerashchenko said.

Gerashchenko thanked all parties involved in the exchange of POWs.

Document about the withdrawal of under 100-mm arms

may be initiated on September 8

The document about the withdrawal of under 100-mm weapons in Donbass can be initiated at the next meeting of the contact group scheduled for September 8, Interfax-Ukraine reports with a reference to its source.

"Even if the subgroup for security prepares a compromise version of this document, it can be initiated no earlier than September 8 at best," the source said.

Currently, participants of the working subgroup for security are carrying on working in Minsk.

"Negotiations of the working group on security continue in Minsk," the Foreign Ministry of Belarus posted on Twitter.

A source participating in the negotiations told Interfax earlier that the subgroup for security may continue its work on Thursday.

Russia sends yet another humanitarian convoy to Donbass

More than 100 trucks have delivered over 1,100 tons of humanitarian aid, including 500 tons of foodstuffs and 700 tons of textbooks and furniture for local schools, the ministry’s press service told TASS on Thursday.

"All vehicles carrying humanitarian cargo have arrived in Donetsk and Lugansk," a spokesman for the ministry said.

No incidents occurred on the way, all vehicles are in order, he added. After being unloaded, the convoy will return to Russia.

More than 100 trucks have delivered over 1,100 tons of humanitarian aid, including 500 tons of foodstuffs and 700 tons of textbooks and furniture for local schools.

Since August 2014, Russia has delivered more than 44,000 tons of humanitarian cargos to Ukraine’s embattled Donbas region.

It will be recalled, that the 36th "humanitarian convoy" arrived in Donbass half empty.

ATO headquarters: The situation in the ATO area worsened;

The situation in the ATO area significantly deteriorated yesterday evening, as rebels fired over 100-mm weapons virtually along the entire demarcation line, the ATO press-centre posted on Facebook.

The most intense rebel activity was recorded near Mariupol. Ukrainian positions in Starognativka, Novosellivka Druga, and Chermalyk (twice) were bombarded with 120-mm mortars at the end of the day.

Gunmen carried out attacks on ATO forces in Prokhorivka   from their positions in Starolaspa at 6PM with 152-mm artillery. Moreover, Ukrainian troops stationed in the villages of Orlovske, Lebedynske, and Starognativka came under 152-mm artillery attack after 10PM. Rebels fired Grad MLRSs on army positions in Bogdanivka at 9.05PM.

The most difficult situation was reported near Donetsk. Ukrainian troops in Maryinka were attacked several times with 120-mm mortars, ICVs, heavy machine-guns and 152-mm artillery.

In the Artemivsk direction, insurgents bombarded Troitske with a tank at 7.30PM. Ukrainian positions in the village of Zaytsevo were assaulted with mortars and ICVs at about 9PM.

In total, insurgents breached the ceasefire 90 times in the past 24 hours. They committed artillery 14 times, mortars 31, tanks 5 times, and fired MLRSs once.

Gunmen continued to shell the villages of Bogdanivka and Starognativka near Mariupol with artillery in the period from midnight till 6AM, August 27.

Insurgents carried out 20 attacks in the M sector in the period from 4PM Wednesday till 6.30AM Thursday, a press officer of the M sector, Yaroslav Chepurny, told 0629.

13 more attacks were recorded in the sector before midnight, namely 7 assaults with 152- and 122-mm artillery, five with 120- and 82-mm mortars and one with MLRSs on army positions near Novognativka.

7 more attacks have been reported in the sector since midnight. Bogdanivka came under fire 4 times, Starognativka twice, and Chermalyk once.

The fiercest attack occurred in Bogdanivka, where rebels simultaneously committed both 152-mm SP artillery and 82-mm mortars in the period between 4.30 and 5.00AM.

"We have suffered very serious losses, the information on which will be ascertained later,” Chepurny said.

Two ATO fighters wounded in a 6-hour attack on Maryinka

Two Ukrainian servicemen have been injured as a result of a rebel attack on the town of Maryinka, Donetsk region. The bombardment lasted six hours in a row, a spokesman for the General Staff on "B" sector, Yevgen Sylkin, told Channel 5 during a phone conversation on the morning of August 27.

According to him, the information on possible victims among the civilian population is currently ascertained at the regional military and civil administration.

Rebels are conducting rotation of infantry units in the sector Losove-Krasnogorivka-Maryinka on account of elements moved to the Petrovsky district of Donetsk.

It is mainly Russian mercenaries with low level of training, the founder of the IRG, Dmytro Tymchuk reported on the morning of August 27 on Facebook.

A rifle unit supported by ICV2s and APC-80s was additionally moved to Telmanove, he writes.

Meanwhile, militants continue their attacks, especially in the Donetsk and Mariupol directions.

7 Ukrainian military were killed, and 13 others wounded in the area of the anti-terrorist operation in the past 24 hours, a spokesman for the Presidential Administration on ATO issues, Oleksandr Motuzyanyk, reported at a briefing on Thursday.

According to Motuzyanyk, ATO forces suffered these losses near Maryinka and in the Mariupol direction.