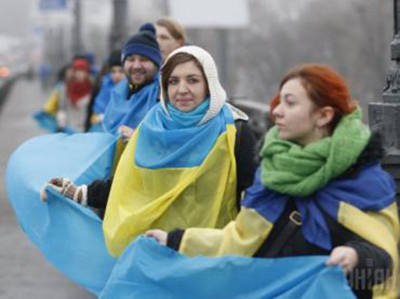 Majority of Ukrainians see Russia as aggressor, and "PRD" and "PRL" as terrorists

71% of Ukrainians believe Russia is an aggressor, and nearly 65% described the so-called "PRD" and "PRL" as terrorist organizations according to an opinion poll conducted by the "Centre of Rasumkov".

8.7% of respondents think that Russia is not implicated in the developments in the east of Ukraine and is not a party to the conflict.

64.9% of respondents called the "PRD" and "PRL" terrorist organizations, which have no right to represent the population in the respective territories.

More than 50% of respondents believe the current events in the eastern Ukraine are Russia's annexationist war, 25.6% call them a struggle between the USA and the RF for the influence upon Ukraine, and 13.6% described them as a civil conflict.

Outlawed units of gunmen continued to escalate the situation in the ATO area at the end of the day in the period between 6PM and midnight, with the tensest situation reported in Mariupol.

Gunmen carried out attacks on army positions in Novogrygorivka and Starognativka (twice) at about 9PM with 122-mm artillery. Moreover, a Ukrainian stronghold in Starognativka was bombarded with 120-mm mortars.

A village of Opytne situated near Donetsk was attacked with 120- and 82-mm mortars and small arms in the period between 10PM and midnight.

Furthermore, Ukrainian troops stationed in this village were openly shelled at 10.40PM with Grad MLRSs.

Additionally, rebels fired 122-mm artillery on resident quarters of Avdiyivka, where there are no government forces at all, at 9.30PM and at midnight.

In the Lugansk region, Ukrainian troops in the settlements of Stary Aidar, Tryokhizbenka, and Stanyzia Luganska came under mortar fire at the end of the day.

Granitne under rebel fire at night; 19 attacks on the M sector in the past 24 hours

19 assaults were recorded in the M sector over the past 24 hours, August 27, a press officer of the M sector, Yaroslav Chepurny, told 0629.

Also, rebels shelled Chermalyk and Mykolayivka. They did not aim at Ukrainian military, but at the two villages.

No losses among civilians were reported, but there was some damage done.

Tymchuk: Russia sent 15 troop trains with ammunition to Donbass within a month

Russia continues to actively provide Donbass rebels with heavy arms and ammunition, the founder of the Information Resistance Group, Dmytro Tymchuk, posted on Facebook. According to analysts, the occupied territories received from Russia during the last month (July 25 - August 28, 2015): around 150 tanks, 50 ACVs; 48-50 gun ammunition systems and SP artillery, 32 volley fire systems (MLRS); over 250 trucks with ammunition and equipment and 15 troop trains with ammunition and POL.

No losses were reported in the area of the anti-terrorist operation in the past 24 hours, but five soldiers sustained wounds, a spokesman for the Presidential Administration, Andriy Lysenko, reported at a traditional briefing on Friday.