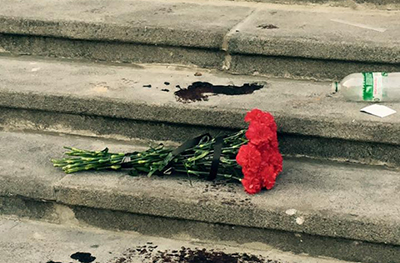 MIA: 131 law enforcement officers hurt in clashes at the Rada

In general, 141 people were hurt near the Verkhovna Rada on August 31, 131 of whom were law enforcement officers, a spokesman of the Ministry of Internal Affairs, Artem Shevchenko, reported on Facebook on the morning of September 1.

"The data revealed by the MIA show: 141 casualties were reported in total, 131 of whom were policemen and National Guards. 10 people were severely wounded. 18 people were detained in general, 13 of whom have already been freed," he said.

As reported earlier, some clashes between law enforcement units and demonstrators speaking against the adoption of amendments to the Constitution occurred on Monday near the Verkhovna Rada.

Minister of Interior Arsen Avakov accused the Svoboda Party leader, Oleh Tyahnybok, and his party members of the tragedy at the Verkhovna Rada.

Tyahnybok and "Svoboda", in turn, denied their guilt and blame the Interior Ministry and authorities for organising the provocations.

According to the Joint Control and Coordination Centre, the ceasefire has been fully observed by both parties to the conflict, a press secretary, Darka Olifer, posted on Fаcebook.

Also, according to her, the trilateral contact group launched a video conference with the participation of representatives of certain areas of the Lugansk and Donetsk regions.

Another National Guard has died of wounds received when a hand grenade had gone off in the course of a demonstration near the Verkhovna Rada on Monday, Minister of Internal Affairs Arsen Avakov posted on Twitter.

No losses were reported in the area of the anti-terrorist operation in the past 24 hours, but five soldiers sustained wounds, a spokesman for the Presidential Administration on ATO issues, Oleksandr Motuzianyk, reported at a briefing on Tuesday.

"No Ukrainian serviceman was killed or wounded in the past 24 hours," he said.

According to Motuzianyk, no cases of committing heavy weapons by rebels were registered yesterday.

In the Lugansk direction, the village of Krymske was the only "flashpoint", where the enemy conducted two armed provocations at night time.

A somewhat uneasy situation was reported at the Svitlodarska salient, as the enemy fired on our forward positions near Sanzharivka and Losove twice with small arms.

It was peaceful in Gorlivka, Dzerzhynsk and in areas to the south of them (all the way up to the town of Yasynuvata) on Monday.

The most complicated situation of August 31 was reported near the Donetsk airport, where hostilities lasted from 4 till 11PM.

The enemy carried out ten attacks with small arms and grenade launchers near Avdiivka and Opytne. Four rebel provocations were conducted in Maryinka.

It was calm in Pisky and Krasnogorivka yesterday.

It's for a second second day in a row that no hostilities are reported in the Mariupol direction, the ATO Headquarters stressed.