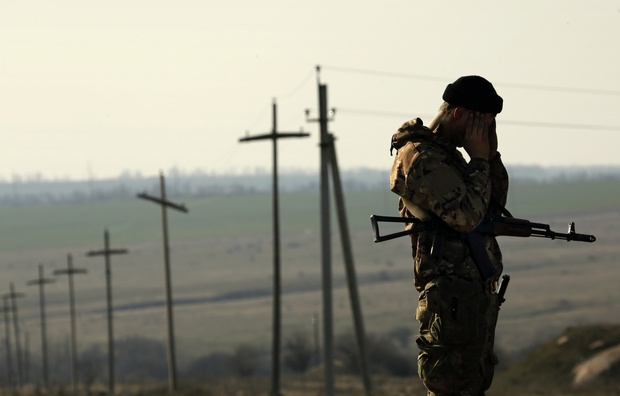 Russia prevents Ukraine from contacting its servicemen captured in Crimea,

Advisor to the Head of the Security Service of Ukraine Yuriy Tandit told the TV channel "112", as reported by "Ukrinform".

Tandit also promised to do everything possible in order to get Ukrainian soldiers back.

As reported earlier, three soldiers of the 79th air mobile brigade were found missing on September 5.

The Border Guard Service of the Russian Federal Security Service announced it had detained three Ukrainian military, accusing them of violating state borders, but promised to pass them back to Ukraine.

Then, there was a press release announcing that the captured servicemen may have been "commandos".

Last night in the ATO area was not completely peaceful, as rebels continued armed hostilities after 6PM, the ATO press-centre posted on Facebook.

In particular, a sabotage and reconnaissance rebel group comprised of seven soldiers backed by mortar and small arm fire tried to turn the army's flank at about 6PM. The gunmen were forced to retreat.

Moreover, in the Artemivsk direction, army positions in Mayorsk were attacked with small arms at 6.25PM. Ukrainian troops near Maryinka were shelled with 82-mm mortar at 11PM.

In total, pro-Russia gunmen violated the ceasefire agreement three times in the past 24 hours.

Rebels made another attempt to breach the defensive line of Ukrainian troops near the village of Syze after midnight, September 8 at 1.40AM.

"The trust funds will help NATO countries to assist the Armed Forces of Ukraine in the following areas: modernization of communication systems and automation worth more than EUR 2 million, reform of logistics and standardization systems of the Ukrainian Armed Forces worth about EUR 1.2 million, physical rehabilitation and prosthetics of soldiers worth EUR 845,000, cyber defence worth EUR 815,000, as well as retraining and social adaptation of servicemen worth EUR 410, 000," Kushnir said.

Close to 8,000 people have lost their lives in eastern Ukraine since mid-April 2014, according to the latest report by the United Nations Human Rights Monitoring Mission in the country which was released today.

The report, which covers the period from 16 May to 15 August 2015, notes that the number of civilian casualties more than doubled by comparison with the previous three months, with at least 105 people killed and 308 injured compared to 60 killed and 102 injured between 16 February and 15 May.

“The shelling of residential areas on both sides of the contact line has led to a disturbing increase in the number of civilian casualties over the past three months,” UN High Commissioner for Human Rights Zeid Ra’ad Al Hussein warned in a press release.

“More needs to be done to protect civilians and put a complete stop to the hostilities, in accordance with the February ceasefire agreement,” he added.

Since the conflict began in eastern Ukraine in mid-April 2014, a total of at least 7,962 people – including Ukrainian armed forces, civilians and members of the armed groups – have been killed, and at least 17,811 injured, the High Commissioner said, citing the latest figures available.

“The withdrawal of heavy weapons from the contact line as foreseen in the Minsk Agreements remained partial with the armed groups and the Ukrainian military using mortars, canons, howitzers, tanks and multiple launch rocket systems in daily clashes and exchanges of fire along the contact line,” the report states, noting that during the reporting period, the majority of civilian casualties caused by shelling occurred within the territories controlled by the armed groups.

The document further underlines that “the situation in Ukraine continued to be marred by ongoing armed hostilities in some areas of Donetsk and Luhansk regions reportedly fuelled by the presence and continuing influx of foreign fighters and sophisticated weapons and ammunition from the Russian Federation.”

According to the report, civilians living in the conflict-affected area, particularly near the contact line, bear the brunt of the armed conflict, facing uncertainty and hardship on a daily basis. Their overall situation is reportedly worsening, including in terms of access to food and water, and is of particular concern with winter approaching.

1 Ukrainian military was killed, and two others wounded as a result of a clash with rebel commandos during the anti-terrorist activities in the past 24 hours, a spokesman for the Presidential Administration on ATO issues, Oleksandr Motuzyanyk, reported at a briefing on Tuesday.