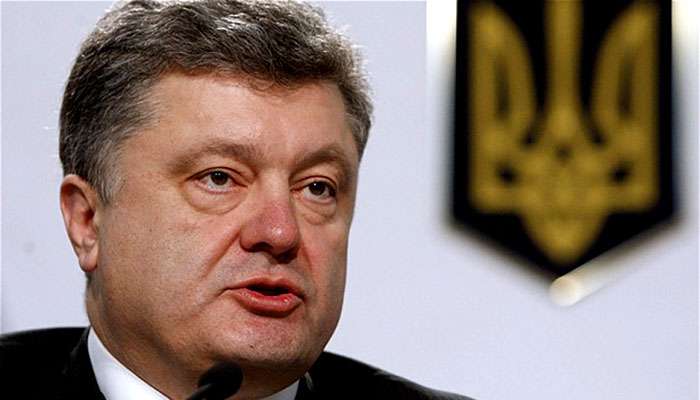 Poroshenko urges EU to be united in relation to Ukraine

Kiev needs a firm consensus among the EU member states as well as their solidarity in relation to Ukraine, President of Ukraine Petro Poroshenko announced at the YES summit in Kyiv.

"There are lots of problems in the world, but believe me, speaking from my own experience of meeting different country leaders on a daily base, Ukraine is an absolute priority," he said.

"We need two things, namely a firm consensus among the EU and the Transatlantic Community. I understand that Europe is in a great danger. The migrant crisis is a crisis of values," he stressed.

"Secondly: We need solidarity in relation to Ukraine, because it is the largest postwar crisis extremely dangerous not only for Ukraine and Europe, but also for the whole world. We fight for peace, democracy, and European values in the east of Ukraine," the president said.

Poroshenko: We know where Russian troops are stationed in Ukraine.

They have not returned home yet

President Petro Poroshenko believes that Russian troops and equipment have not returned to Russia and continue to stay in Ukraine according to his speech at a YES conference in Kyiv.

"No Russian soldiers and no Russian tanks have come back to Russia," he said.

According to the data provided by the Ukrainian and foreign intelligence services, the Russian Army is still in Ukraine and Poroshenko is informed about its location.

Purgin abducted by the RF

Russian special services were involved in kidnapping of a former PRD parliament speaker, Andriy Purgin, on September 5, Russian RBK reported with a reference to The Times.

A Russian-led coup inside east Ukraine’s rebel leadership along with an increase in military engagement in Syria herald a strategic shift in Moscow’s approach to the West.

Russian security forces kidnapped the hard-line Speaker of the rebel parliament last week, according to Ukraine intelligence. Andrei Purgin was held with his wife for five days in the security headquarters of his comrades in Donetsk, before being replaced by his more conciliatory deputy, Denis Pushilin.

His demise suggests that the Kremlin wants to step back from open conflict in Ukraine and move towards implementing the peace accords it signed in Minsk, it reports.

The reason for abduction may be Russia’s desire to abandon the PRD and PRL, according to the newspaper.

In addition, The Times cites a document of the Security Service of Ukraine, which says that the main priority for the Kremlin is now a handoff of the PRD and PRL to Ukraine on Russian terms.

According to the document, Russia will not violate the territorial integrity of Ukraine and wants to shift the financial costs for the restoration of Donbas to Kyiv.

Western diplomats also stress that the Russian manoeuvring in the situation with Ukraine is connected with the increase of Russian presence in Syria. Involvement Syria, in turn, can be used as a trump card to obtain certain concessions in talks on Ukraine. Diplomats believe that Putin's speech at the UN General Assembly on September 27 may have new key messages.

The enemy did not breach the armistice, thus did not resort to arms on September 10 in the ATO area, the ATO press-centre reports.

A lull in fighting was reported in the period between midnight and 6AM, September 11, along the whole demarcation line.