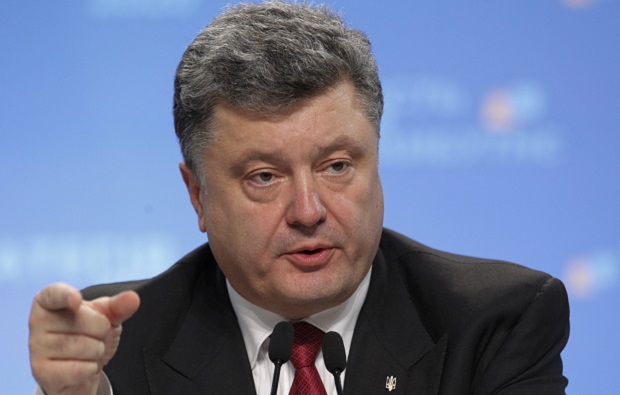 Poroshenko calls for sanctions if the conflict escalates

and elections are held in occupied Donbass

An escalation of the Donbass conflict has to be followed by imposing new sanctions against Russia, President Petro Poroshenko said in his interview with three foreign media, namely The Washington Post, Independent and Die Welt.

“[…] I assure you that immediately when Russian troops leave my country, we will have free and fair elections on the territory which was occupied by Russia, and we will have a special type of program for renewing infrastructure, for renewing factories, for... renewing the structure for the social benefits, and renewing the Ukrainian media there,” Poroshenko asserted.

“[If gunmen hold local elections…] This is a red line… first, the Minsk process and the peace process will be in a big danger, because that will be in direct violation of Minsk. And it should be a reaction. What kind of reaction are we talking about? Sanctions. We do not expect that our international partners go into a war. We are doing an almost impossible thing, we built up one of the strongest armies on the continent.”

“If Russia tries to kill the Minsk [process], if Russia is crossing the red line, we need two things. Sanctions, and the United States it seems to me to be ready to go further for the sanctions. But for us, crucially important is to keep transatlantic unity. Unity of the European Union. And the dialogue we have now is very important. And the second one is the solidarity with Ukraine. Not only solidarity politically. Not only solidarity economically. But also solidarity in assisting us to create an effective defence force.”

Situation in the ATO area escalating,

as 8 rebel attacks reported in the past 24 hours

The situation in the ATO area has slightly deteriorated yesterday evening and last night, the ATO press-centre posted on Facebook.

Rebels intensified their activity in the Artemivsk direction, and assaulted army positions in the area in the period between 6PM and midnight. They carried out three attacks on a stronghold of ATO forces situated to the north of Losove.

In total, insurgents breached the ceasefire 8 times in the past 24 hours.

Russia decided to send another convoy to Donbass

Russia has announced about forming the 38th "humanitarian convoy" for Donbass,

TASS reported with a reference to the press service of the Ministry of Emergencies of Russia.

"Another - the 38th now - "humanitarian" column is formed in the territory of the Donskoy Rescue Centre of the Russian REM situated in the Rostov region. Trucks from various Russian regions will join the convoy of Noginsk trucks," a REM spokesman said.

According to Head of the Department Vladimir Puchkov's preliminary report, the column is due to be sent to Donbass on September 17. Most of the cargo will be food, the Russian official said.

The founder of the Information Resistance Group argues that Russian military have put to death a local resident in Gorlovka, according to his daily report on Facebook.

"Public executions have been carried out in Gorlovka. The commander of a road block - reportedly a local resident - was executed by shooting for an attempt to fire artillery cannons without being unauthorized to do so," he informed.

However, there is no information on this either in social networks or in local groups.

In addition, as reported by Tymchuk, the Russian headquarters delivered and enforced a sentence in the Petrovsky district of Donetsk. 2 gunmen from local residents were executed by shooting for self-assumed power.

General Staff: 2 service members killed, and 2 others wounded in the ATO area in the past 24 hours

2 Ukrainian service members were killed, and 2 others wounded in the past 24 hours in the ATO area, a spokesman for the Presidential Administration on ATO issues, Andriy Lysenko, reported at a briefing on Monday.