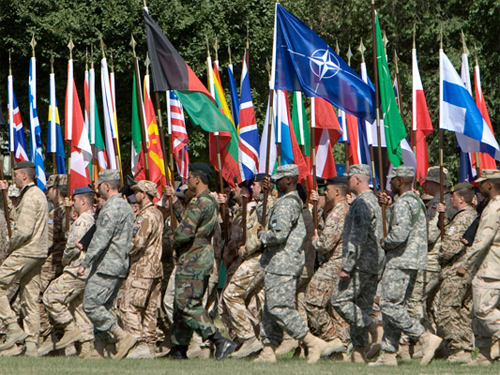 Diplomat: NATO will send military forces if UN ratifies the mission in Ukraine

Member-states and NATO partners will send their troops to Ukraine, if a peace-making mission to Ukraine is approved by the UN Security Council, the acting head of Ukrainian mission at NATO, Yegor Bozhok said in an interview with "Yevropeyska Pravda" (European Truth).

" […] If a peace making mission in Ukraine is approved by the UN Security Council, I am positive that member-states and NATO partners will send their military forces to us," Bozhok said.

It will be recalled, that US Assistant Secretary of State Victoria Nuland announced earlier that there would be no need to send peacekeepers to Ukraine if the Minsk agreements were fully implemented.

President of the European Council Donald Tusk also asserted that the EU would not be able to come to the decision on the deployment of EU peacekeeping missions to Ukraine in the near future.

Mass Media: Russia sends its military to Syria without their consent

Russia sends its military equipment and personnel to Syria; however, not all officers and contractors are willing to fight and refuse to go to the flash point, Gazeta.Ru reports.

According to the publication, the high command gathered in their opinion the most promising contractors of the Eastern Military District on August 17 and formed a group of 20. They were supposed to go on a mission to unload equipment at the Tunelka railroad station near Novorossiysk and return home by train.

However, soldiers were convoked by their commander right before the departure to Novorossiysk, and notified they may have to go to a "hot country".

The contractors decided either to officially refuse to go on a business trip, or to send in resignation. However, their officer refused to accept any written requests.

The headquarters postponed the dispatch of soldiers scheduled for September 17 because of the row over "refusees".

As reported earlier by a number of leading Western media, Russian troops fight in Syria with the army of Syrian President Bashar Assad.

The Czech parliament has ratified the Association Agreement between Ukraine and the European Union, Ceske Noviny reported.

As of September 16, the Association Agreement between Ukraine and the EU had been ratified by 24 out of 28 EU member states. Two countries, namely Belgium and the Czech Republic had not completed this process. Only two countries - Greece and Cyprus - have not dealt with the issue. According to some reports, these countries deliberately stall the process.

ATO Headquarters: one rebel attack reported in the ATO area

The past 24 hours in the ATO area passed almost fully peacefully, the ATO press-centre posted on Facebook.

"The only attack on army positions was recorded in the Artemivsk direction at 10PM. A Ukrainian stronghold near Losove came under chaotic rebel fire there," a statement reads.

2 Ukrainian military were killed, and 5 others wounded in the area of the anti-terrorist operation in the past 24 hours, a spokesman for the Presidential Administration on ATO issues, Andriy Lysenko, reported at a briefing on Friday.