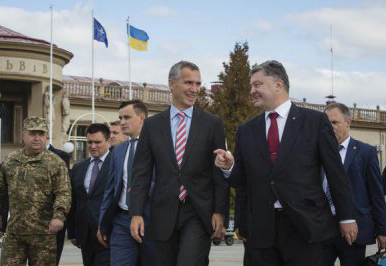 Russia's actions in Crimea and Donbass have not only encroached on the territorial integrity and sovereignty of Ukraine, but also launched a challenge against everyone who wants to have a stable and peaceful development of Europe, NATO Secretary General Jens Stoltenberg said during a press conference, as reported by "Ukrinform".

"Russia's actions in Crimea and in some regions of Eastern Ukraine have not only encroached on the territorial integrity of Ukraine, but also undermined the world order based on the principle of security for many decades. Thus, this is a challenge to all of us who want to have a stable and peaceful development of Europe," the Secretary General said.

He stressed that this is the reason why the Alliance supports Ukraine "in such a strong and active way", and focuses on the need to respect and implement the Minsk agreements, for they lead to a peaceful settlement of the Donbass conflict.

No rebel attack on army positions as such were reported over the past 24 hours, the ATO press-centre posted on Facebook.

"However, the enemy conducted three provocations firing from their territories close to the demarcation lines," a report reads.

In the Artemivsk direction, insurgents fired on a Ukrainian stronghold near the village of Kirove from their positions in Shumy with small arms at 9PM.

Also, mortar fire was heard near Zolote at 10PM.

They also fired heavy machine-guns near Mayorsk at 11.45PM.

Near the Latvian Border Are Increasingly More Provocative

Russia's activity near the Latvian boundary has become much more intense and provocative compared to that of the last year, Commander of the Latvian National Military Forces Raymond Graube announced, as reported by Delfi.

He noted that Russia's military activity is especially evident on the sea, as Russian ships more and more often approach the territorial waters of Latvia mostly without any rational explanation.

Russia's warplanes keep coming near to the air boundary lines of the Baltic States for no apparent reason, too.

In total, NATO has carried out 250 interceptions of Russian military aircraft for the first half of the year.

Moscow is planning to deploy 2,000 military personnel to Syria, as clashes between opposition armed groups and the Syrian army intensified.

The force will include fighter aircraft crews, engineers and troops to secure the facility, as reported by Financial Times on Monday.

The move comes after the Russian President Vladimir Putin held a meeting with Israeli Prime Minister Benjamin Netanyahu on Monday to discuss coordination mechanisms in Syria, to prevent Israeli and Russian troops from accidentally exchanging fire.

However, both leaders differ in their assessment of the situation. While Netanyahu believes that Iran and Syria fuel terrorism, Putin has made clear that his government supports Syrian President Bashar Al-Assad.

“Our main goal is to defend the Syrian state,” the Russian head of state said after the meeting.

The decision of deploying military personnel was regarded by many analysts as a response to the shelling of the Russian Embassy in Damascus on Sunday. Despite it caused no casualties, it sparked concerns in Moscow.

President Petro Poroshenko has announced at an NSDC meeting that the evidence of Russia's presence in Ukrainian Donbass will be shown to the NATO Secretary General. He made his point clear during a NSDC meeting, at which Jens Stoltenberg was personally present for the first time.

Russian troops have illegally invaded the territory of Ukraine four times, a source in the Russian Parliament admitted, as reported by the Italian newspaper Corriere della Sera with a reference to a Russian parliamentarian source.

For the first time it happened in August, 2014, during battles near Illovaysk.

The second invasion took place in October, 2014, but Russia's armed forces did not participate in fighting.

In 2015 the Russian army entered Ukraine for the third time during the battles over Debaltseve and negotiations in Minsk.

Russian troops turned up in Ukraine for the last time a month ago, but this time with no intent to fight, according to the interlocutor.

ATO Headquarters: No Casualties in the ATO Area in the Past 24 hours

No deaths were reported in the area of the anti-terrorist operation in the past 24 hours, but one soldier sustained wounds, a spokesman for the Presidential Administration on ATO issues, Oleksandr Motuzyanyk, reported at a briefing on Tuesday.