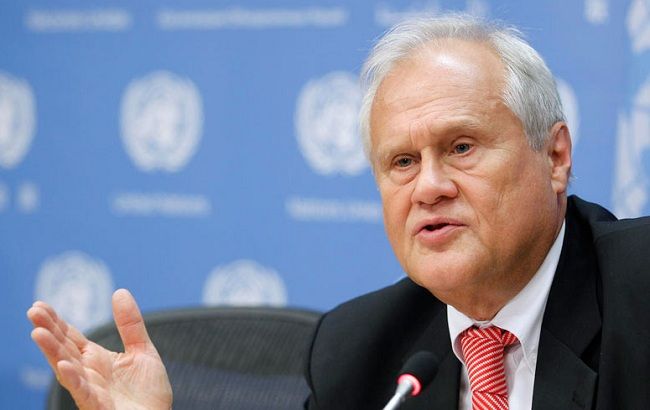 OSCE: The Contact Group Failed to Reach an Agreement

on the Withdrawal of Arms

The parties to the conflict in Ukraine have not reached an agreement on the withdrawal of weapons, OSCE special representative in the trilateral contact group on Ukraine Martin Sajdik told journalists on September 22, UKRINFORM reports. According to Martin Sajdik, the matter concerns tanks, weapons of calibre less than 100mm and mortars of calibre less than 120mm. “The parties still have no agreement on the issue. The open and constructive discussion of the matter lasted for almost seven hours,” the OSCE special representative announced. The working group on security is expected to continue its work next week.

The BBC has won a case against Russian TV channel RT, which claimed the corporation faked a report on Syria.

The station said the BBC had "staged" a chemical weapons attack for a news report, and digitally altered the words spoken by an interviewee.

The BBC complained to Ofcom, saying the "incredibly serious" allegations struck "at the heart" of its obligations to accuracy and impartiality.

Ofcom ruled that elements of the programme were "materially misleading".

It also said the BBC had been treated "unfairly" by programme, called The Truthseeker, as it was not given an opportunity to address the allegations before the programme was broadcast.

Separately, Ofcom said another episode of The Truthseeker was guilty of a further "serious breach" of the broadcasting code.

The episode, titled Genocide of Eastern Ukraine, contained claims that the Ukrainian government was deliberately bombing civilians in the east of the country, had murdered and tortured journalists and carried out other acts such as crucifying babies.

Ukrainian army forces were accused of "ethnic cleansing" and were compared to the Nazis in World War Two.

The programme had "little or no counterbalance or objectivity", Ofcom ruled.

The only response to the allegations in the broadcast was in the form of a caption saying "Kiev claims it is not committing genocide, denies casualty reports", which appeared on screen for six seconds.

Ofcom said viewers expected the programme to tackle controversial global events from a Russian perspective - but that it had broken a rule designed to ensure impartiality in coverage of controversial political subjects.

TV Novosti cancelled The Truthseeker and removed all previous episodes from its website as a result of the complaints, Ofcom noted.

9 Violations of the Armistice Agreement in the Past 24 Hours

Illegal paramilitaries breached the ceasefire 9 times over the past 24 hours, the ATO press-centre reports.

In particular, our strongholds in Mayorske were attacked with small arms, sniper rifles and grenade launchers at 6 and 7PM.

Also, rebels assaulted Ukrainian positions in Zaitseve with small arms app. at 7PM. A number of strongholds of ATO forces in Losove came under rebel fire at 6.55, 9.10, and 10.30PM.

Moreover, rebels shelled army positions in the village of Luganske at 11PM.

In the Lugansk direction, gunmen fired grenade launchers near Sokilnyky at 10.30PM.

No attacks on government forces were reported in the period from midnight till 6PM, September 23.

Zakharchenko Threatens with War if Ukraine Cottons Up to NATO

Donetsk rebel leader Alexander Zakharchenko threatens to resume hostilities in Donbass if Ukraine and NATO become friends, Ukrainski Novyny reports with a reference to his statement.

"If Ukraine starts to prepare for a referendum on joining NATO or other procedures, the PRD will immediately pull out of the Minsk talks, and start mopping-up operations against Kiev's occupation army in Donbas," Zakharchenko warned.

He believes that statements made by Ukrainian President Petro Poroshenko and a Ukrainian representative at the negotiations in Minsk, Leonid Kuchma, about necessity for joining NATO are aimed to "ruin the Minsk agreement".

ATO Headquarters: No Casualties in the ATO Area in the Past 24 hours

No deaths were reported in the area of the anti-terrorist operation in the past 24 hours, a spokesman for the Presidential Administration on ATO issues, Andriy Lysenko, reported at a briefing on Wednesday.

According to him, Ukrainian border guards recorded an enemy UAV near the village of Talakivka (Mariupol district).