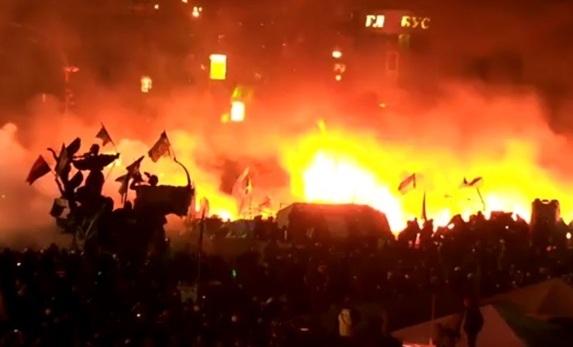 The office of the associated member of the ESU - the Ukrainian Association of Retired Persons - was seized in an illegal and strongarm way by militants authorised by the incumbent government at the beginning of 2012. The whole procedure was conducted by Ukraine's minister of forest resources Victor Sivez (owner of properties and businesses in the Czech Republic). A politically corrupted protection against us was provided by Andriy Klyuyev (owner of properties and businesses in Austria), the newly appointed head of the Yanukovych's Presidential Administration.

All documentation, our property including personal belongings of association's members were captured and kept inaccessible for nine long months.  Our multiple requests for support intended for the leadership of the ESU were ignored, even though the ESU President of that time had repeatedly visited a number of regions of Ukraine at different times and witnessed the real practical work performed by every branch of the Ukrainian Association of Retired Persons.

A letter to the President of Ukraine sent by the ESU was considered by our association as an endeavour to formally dissociate from our problems. Well, judge for yourself.

Today, a similar attitude is assumed by the United Europe towards Ukraine. The repeated formal  verbiage regarding their "willingness to take sanctions against the incumbent government" is the same gesture of "INDULGENCE" that was made by leading countries in Munich  in the remote year 1938 resulting in the establishment of fascism and totalitarianism all over Europe. May I remind you that the largest price for the destruction of Fascism was paid by Ukraine, for losses in killed and wounded amounted to almost one third of Ukraine's population, or 14 million people.

Today, our people have risen up once again for freedom, Christian values and Ukraine's European choice. And once again we have had to face indifference and indulgence towards both local and Russian dictators.

Europe has already tried sitting out resulting in the launch of World War II, in the blockade and division of Germany, in the suppression of the Hungarian revolution in 1956, in drowning in blood the mass actions in the Czechoslovakia in 1968, and in a lot of other things…

Blood of innocent people including that of elderly citizens of Ukraine is not only on Yanukovych's hands, but also on the leaders of France, Germany, the EU…

Of course, you can also put this letter on the scrap-heap. That is where our other requests seem to have been put. But did our forefathers die for this kind of Europe, or rather, did the Founding Fathers want such a full up, blind and heartless Europe?

Head of the Council of the UARP