Being invited by the American Association of Retired Persons (AARP) the Head of the UARP Council Volodymyr Dzjobak took part in a range of activities devoted to the 45-th anniversary of this mighty organisation, that comprises 35 million members. These festivities along with took place in Chicago with the participation of a great number of guests from Great Britain, Canada, Japan, from many other countries of Europe, Asia, Africa, Australia.

Among the activities provided there was a study,

during which the AARP experts shared their comprehensive work experience, answered the questions asked by the people present, showed movies,and, besides, there was a grand exhibition, work-shops, cultural program were performed.

Volodymyr Dzjobak took floor in front of foreign colleagues, told about what we had managed to do for the aged of Ukraine during the three years since the UARP formation, briefly underlined the principal activity objectives with respect to the protection of the elderly’s rights, the life improvement. The speech held in English generated the presentees’ interest and was accompanied with applouses.

AT THE AARP CONGRESS IN CHICAGO

It is of peculiar pleasure for me, the President of the All-Ukrainian Association of Retired Persons Coucil, to give You the best regards on behalf of 16 thousand UARP members. It is an inconsiderable part out of 14 million pensioners of Ukraine, but we hope that the quantity of the Association members will be measured by hundred thousands and even by millions of members. Such sense of optimism is encouraged by the AARP activity which is a brilliant model for us.

Three years ago when our Association was in the process of formation, we already knew that none of the experience of a foreign society model, of any public institutions implemented within the Ukrainian borders had been successful. Therefore, with the knowledge of the AARP activity, we, actually, were not going to build up a similar organisation with an exact copy of Your experience in Ukraine. Indeed, we both had quite different starting point, different democratization levels, social political situations, and, unquestionably, a different mentality.

But there is a distictive feature in the idiology of Your Association that we liked at the first sight, and which we stole from AARP: it’s just a reliability on one’s own forces, one’s own intellect, the refusal from principles of living on somebody’s account, which are able to kill not only the feeling of personal dignity, but also a range of abilities and skills inside a person. That is an exact reason of the motto of our public organisation: "Help Youself on Your own!".

And that is why, in the course of three years of our activity we hadn’t asked the state nor public bodies for money, despite all the other public organisations, which can not, actually, properly act without financial support from the government. We even didn’t account for grants, although our financial background is quite insufficient. The only grant provided by the Canadian Embassy in Ukraine (which we greatly appreciate!), was received just by chance (when we had offerred the documents to the competition we hadn’t even accounted for anything, and we were greatly surprised to receive a message about the grant provided). We ‘ve put these assets to the information program.

On the post-soviet space AARP has some advantages: firstly, 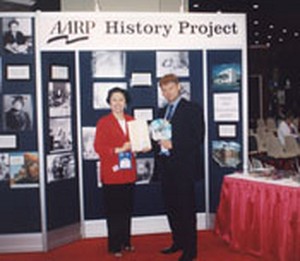 it enables millions of older people to mobilize their creative potential but on the basis of somewhat political doctrine, whereas on the basis of renewed faith in their own strength; secondly, it promotes the adaptation of this huge part of the society to the conditions which are new to us; thirdly, it gives a strong spur for the active longevity.

Some words about what what we have managed to do within the period of three years. We have the following programs: medical, gender, the above mentioned information program for the Association’s members (we publish for them "Our Generation" magazine, “50 plus" newspaper, various catalogues); goods and services discount program; "Legal Emergency Aid" program; "Dialogue of Generations" program; "Healthy Life" program; the one and only in Ukraine pensioners’ health insurance program; "Bank of Clothes for Retirees" program, etc.

The President of the European Senior Citizens Union (ESCU) Dr. Bernhard Worms, on visiting Kyiv and on getting familiar with our work, highly evaluated our programs and personally initiated the accession of UARP to ESCU. We cooperate with a number of other international organisations - HelpAge International, Age Concern England, FIAPA and other. This year we’ve become the member of FIAPA. We maintain creative contacts with the PADCO project ("Pension Reform in Ukraine" program), consult with the USAID specialists. In fact, sometimes we happen to confront with misunderstanding of some USAID fellow employees, who pay higher attention not to those who work much, but to those who are a good hand just at making the activity out. However, we hope that these difficulties are temporary.

Recently we have opened our renewed Internet site, therefore, in order not to tire the audience, I’d just only propose for those who know the Ukrainian language to have a look at it and find out more about All-Ukrainian Association of Retired Persons. Our Internet sitе is: www.uarp.org

We consider to uphold the elderly’s rights and the creation of an appropriate legal basis in Ukraine to be one of the principal objectives in our work.

In this direction we have made some steps, in particular, we’ve appealed to the Constitutional Court of Ukraine with a require to clarify, whether the law on civil service being currently in force conforms to the Constitution. In our opinion, the older citizens are subjects to discrimination. There, for instance, the age of civil servants in the sphere of state government is limited to 65 years. We are convinced that such a law does harm to our country, as right at this age a person acquires the necessary wisdom for successful work and true mastery in decision-making.

It refers as well to any other country. For example, everyone knows such prominent civil servants, as Theodore Roosevelt, Dwight Eisenhower, Ronald Reagan, Winston Cherchil, Djavaharlal Neru, Conrad Adenauer, General de Gol, Francois Mitterand, whereas in the history of Ukraine the Kyievan dukes Volodymyr, Yaroslav the Wise, lots of “het’mans” are highly respected, who even after the 65th year of age had coped with their task quite successfully and had become famous by the good deeds for the welfare of their peoples. The age, actually, doesn’t matter, all depends on the potential of a person. And we will fully favour our elderly with having an opportunity to realize their great intellectual and spiritual potential.

meeting for the invitation and an opportunity to inform you, gentlemen, with our frugal work, with our success which was achieved due to the brilliant AARP experience.

To let you know more about the UARP activity and to define the ways of mutually beneficial cooperation, we would be glad to welcome the AARP representatives in our office in Kyiv.

Thanks for your attention!