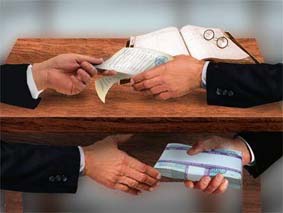 2533 hryvnia - so much is the average salary in Ukraine. In the Ministry of Social Policy said: this is 9% more than the same period of the last year. Parallel decreases wage arrears amount. Is said by 2010 the trend was developing in the opposite direction.

"As of May 1, 2011 wage arrears amount is 1 billion 300 million. What is by 26.6%, or UAH 462 million less than at the beginning of activity of the new government," - said on the TV channel UBR Basil Nadraga, the First Deputy Minister for social policy.

Against the background of positive statistics, officials promised to intensify the work on legalization of wages. For this it is planning to determine the categories of positions to be eligible for the minimum wage. Like, the lowest income declared now anyone - from the janitor to the CEO. But entrepreneurs warn that legalization of salaries would destroy a business.

"Today the taxes and fees are so burden for business that even if entrepreneurs wanted to legalize wages, it is almost impossible. If they withdraw from the shadow all salaries, this will lead a business to disaster. And the government know this is very well" - said Volodymyr Dziobak, Chairman of the Board of the Ukrainian Association of Retired Persons.

However, the corresponding ministry has developed at once six bills concerning the legalization of wages. And it is not going to abandon this idea.