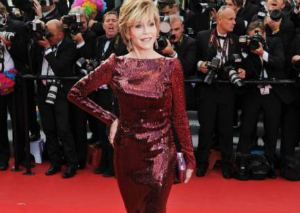 Actress and exercise diva Jane Fonda is in top shape at 75. Her new book explains how

Jane Fonda has been in the public eye for more than 50 years, as an Oscar-winning actress, an activist against the Vietnam war and an exercise guru with more than 20 workout videos to her name. Her first video in 1982 helped start the aerobics craze. Her newest book, Prime Time, a mix of advice on health, fitness, friendship and more, was recently released. And Fonda just released a new yoga DVD. Now 75, the septuagenarian is in the middle of what she calls the third act of her life.

Tell us about your new workout DVD, AM/PM Yoga for Beginners.

My last book, Prime Time, is about ageing successfully. I did research for that for three years. While I was doing that, I was taken by surprise by the extent to which gerontologists feel that staying physically active is maybe the number one, most important [thing] for people to do. Who better than me to do it? The exercise DVDs out there are not aimed at my demographics, baby boomers. I am older, and I have had knee and hip replacements. I have not made a secret about that, so people could understand [that] if I can do these things, then they could do them, too.

What is your exercise routine?

I live on a hill. I walk down the hill and I walk up. It is a very challenging walk. If I am near mountains, I like to hike. If I don’t have time to go out, I do a recumbent bike, the elliptical or treadmill. I alter them because I get bored after about ten minutes. Then I do weight work, either with dumb-bells or with the bands. I do at least 30 minutes, and I try to do it five times a week, if not more. As you get older, you lose muscle mass, so it is important to keep working your muscles. It is important because we want to stay independent. We have to maintain a strong body, back and thighs. After I did this yoga video, I had a pretty intense back surgery. As I was recovering, I am thinking, “Thank God I have remained strong, because everything goes into the quads.” I couldn’t use my back or stomach. I am well now, but for four or five months everything depended on my having strong legs. It allowed me to be independent, something really important for older people.

What do you eat?

I am not a vegetarian, but I eat carefully. I eat a lot of fresh fruits, vegetables, fish and chicken. I eat red meat a couple of times a week. I try to eat colour. Every day I try to have something dark green or dark purple, such as blueberries. I have broccoli for lunch. Along with protein. I try to eat as much fish as possible.

You talk about your life as lived in three acts. What has gotten better in the third act?

When I was in my mid-60s approaching 70, I realised I was so happy. It took me by surprise because I come from a long line of depressives. I wasn’t very happy as a younger person, yet I found myself happy. That’s not what I expected. It turns out through extensive studies of hundreds of thousands of people that the over-50s — men and women, married, doesn’t matter — have a sense of well-being. They are less stressed, less hostile, have less negative emotions. They tend to see what people have in common rather than the differences, which is why we become good mediators. We make lemonade out of lemons. We’ve been there, we’ve done that, but most of all, we know what we can let go of, what we don’t need.

What has become harder?

Moving fast. Lifting heavy weights. Opening bottles. I suffer from osteoarthritis. When I work in the kitchen, I have different tools that don’t hurt my hands. I have special things that help me open bottles and jars. You have to learn to adjust. I used a BlackBerry for years until my thumbs gave out. There was no way I was going to use an iPhone. I thought, “I can’t manage it.” Well, reality forced me to switch to an iPhone because I can use my index finger tapping. I don’t have to use my thumb. Bette Davis said ageing isn’t for sissies. That is right. But trying to pretend that it’s not happening, that your body is the same as it used to be — no. I say, “Okay, this is the way it is. Let me find a way to adjust so I won’t hurt myself, and let me write about it so that other people know what to do.”