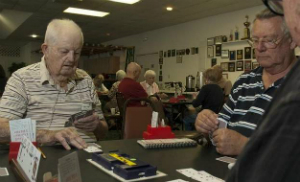 The clock hit 11 a.m., and John Lewis bolted to his feet. Unhooking the oxygen tubes connected to his machine as he walked, he hustled out the door of his apartment in a south Fort Myers retirement community.

It was Wednesday. There was bridge to play.

“C’mon,” he called to this reporter, 65 years his junior, lagging in his living room.

Lewis will be 99 years old in May. He grew up a farm boy in Lorimor, Iowa, nothing but a wide spot in the road and a few hundred souls.

Imagine the excitement when the Harlem Globetrotters asked for some locals to play against around 1933. The Globetrotters had started up a few years earlier, showing up for their first game in a Model T Ford. At the time, black people weren’t allowed to play professionally, according to History.com.

Lewis volunteered. He recalled some back-and-forth in the first half, but as the minutes melted away, the Globetrotters poured on their skills. Lewis learned not to try to steal the ball from a player, who would simply loop it around his neck.

In his nearly century on Earth, Lewis has learned to approach life with verve. Instead of leaving his children more money, he footed the bill last year for a trip to Key West. He enjoys cocktails on the beach. He’s on Facebook to keep up with his grandchildren. And, almost daily, he plays bridge, connecting to friends.

“I like to meet people and try to get along with everybody I meet,” he said.

After high school, Lewis became the only teacher at the town’s one-room schoolhouse before moving to the big city of Cedar Rapids, where he found a job as a clerk for the Iowa Highway Patrol. Luck, fate or maybe midafternoon boredom, drew his gaze out the window one day to see two young women, a blonde and brunette, in formal dresses standing across the street from his office.

“I’d sure like to know you better,” he said.

He later called her for a date. They married in 1940, and added a son, Gary, and daughter, Linda, to their brood.

During World War II, he spent 26 months as a naval radio operator in the Pacific during the invasions of Iwo Jima and Okinawa. In the Korean War, he served 14 months on a destroyer. He made a career as a machinist in a radio equipment factory, a job from which he retired before moving to Cape Coral in the 1960s.

He and Evelyn settled into a routine of playing golf and then bridge at the former Lochmoor Country Club. On Sept. 27, 2010, his wife, who had dementia, died one day shy of their 70th anniversary. The nameplate, John & Evelyn Lewis, remains outside his apartment.

His first piece of advice would be marry wisely. He calls Evelyn “the best woman in the world.”

He can’t play golf anymore, but he still has bridge. Nearly every day, he plays online for up to an hour-and-a half. Twice a week, he spends hours strategizing and socializing over cards with the Lee County Bridge Association at the Elks Lodge in south Fort Myers.

The Alzheimer’s Association says social activities, such as bridge, exercise the mind and reduce the risk of dementia. Lewis’ son, Gary, a 70-year-old Cape Coral resident, credits the game for keeping his father’s mind sharp.

From his father, he has learned to stay active, particularly by exercising the mind.

“If you become a couch potato, it will be gone before you know it,” Gary Lewis said.

His father’s delight in simple joys has inspired him.

When he visits, he often finds his father sitting in the sun. On Halloween, John Lewis dressed as scarecrow for a party, straw sticking out of his coveralls. When relatives come to visit, he takes them to Fort Myers Beach for rum runners and people-watching.

He can no longer drink water because of restrictions linked to his chronic obstructive pulmonary disease.

He spent about a month in the hospital and rehabilitation for breathing problems and pneumonia before being released a few weeks ago. He knows his time is not long.

Last summer, he invited his son, daughter, and their spouses for a boat trip to Key West for a long weekend. Maybe there were grandsons, but his memory sometimes betrays him these days. His family members pushed him in a wheelchair to soak in the steamy, boozy mayhem of Duval Street. He sipped highballs and watched from the boat as they para-sailed and snorkeled.

“I called it my last hurrah,” he said.

His wisdom for a good life is this: Be nice.

“Do onto others as they do onto you. I try to treat people nicely and I don’t have an enemy in this world,” he said.

On Wednesday, his duplicate bridge partner, Rich Green, a retired elementary school teacher, arrived to pick Lewis up and head to the Elks. Lewis recently gave up driving at the request of his loved ones, and he complies, mostly.

Uneven sidewalk no match, Lewis rolled ahead with his walker. While they don’t always play particularly well — they came in last out of 13 tables the week before — Green enjoys hearing about Lewis’ history and taking him out.

Other players dropped by their table to greet Lewis, congratulating the room’s elder on continuing to play. One woman made him smile, by laying this title on him: “a helluva bridge player.”

“Don’t brag me up. I’ll go to pot today,” he replied. He considers himself an intermediate player.

Lewis coughed, and Green reminded him to turn on his portable oxygen.

“I want him to at least play until the afternoon before he drops,” he joked.

Lewis and their opponents, two women, chuckled. Around noon, the room of about 100 people fell quiet. The games began.

He shifted his chair to the table and declared peace to his competitors, “I wish you luck, that’s all I can say.”