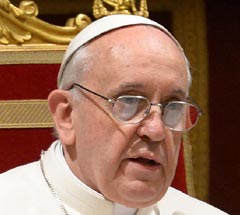 In a March 15 audience with the College of Cardinals, 76-year-old Pope Francis I noted that the clerics in the room who elected him weren’t young men either. (Indeed, the average age of the 115 members of the Roman Catholic Church’s highest ecclesiastical body is 71 years, 10 months, according to Catholic News Service.)

But the pontiff apparently sees their senior status as a plus rather than a liability, because he urged the cardinals to share the insights they’ve accumulated in their years of service with the young.

It wasn’t the first time that a pope had dispensed his views on the issue of aging. And they’ve spoken from experience: Over the past century, according to the statistics, the average age of those who’ve ascended to the papacy has been 66, and three of the popes have been over over the age of 70 (76-year-old John XXIII in 1963, 78-year-old Benedict XVI in 2005, and now Francis I).

Here are some of their pearls of wisdom:

“Men are like wine — some turn to vinegar, but the best improve with age.” —John XXIII.