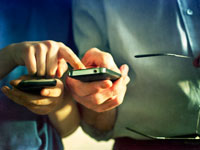 Ideally, when I want to talk to my daughter, I'd … well, talk to my daughter, using the time-honored interaction of human voices and ears. For better or worse, we now live in an age when calling someone on the phone and actually hearing a live voice answer the call is increasingly unlikely.

While smartphones make it easier to text, even basic (read: inexpensive) handsets can do the trick. — Catherine McBride/Getty Images.

Sure, you can always leave a voicemail, but sometimes those linger unanswered for ages. The best way to cut through the clutter: texting.

According to a recent Pew Research Center survey, 73 per cent of adult cellphone owners now text. Young adults lead the pack with an astonishing average of 109.5 messages sent or received on a normal day, while older users text about a dozen times a day.

It's easy to see why texting has become more popular: Your messages are waiting whenever you have a chance to take a glance, they're easy to answer and it's faster to skim texts than listen to voicemail. And while smartphones make it easier to send and receive texts, even basic (read: inexpensive) handsets can be used to text.

Let's start with the fundamentals of text messaging, then consider ways to keep spending on it to a minimum, including my all-time favourite: free.

Every cellphone can send and receive text messages. The cost depends on your cellphone plan.

Some monthly cellular plans don't include any text messages — which means you pay (usually around 20 cents a pop) for each text sent or received. Other plans include a fixed number of texts per month and charge per text when you go over the limit. Some plans include unlimited texting, although those are usually the most expensive.

How you compose your message depends on the kind of phone you're using. Smartphones with full QWERTY keyboards (push button or touch screen) are the easiest to use for texting.

Basic handsets with only a numeric keypad will do the trick, too. For those, you'll see several letters on each number button, just like you do on a landline phone. You're required to press the key multiple times to enter your intended letter, which can be tedious. To save keystrokes, many of these phones include the "T9" feature, which guesses what word you're typing and finishes it for you. This can be handy, though it takes some getting used to — check your manual.

Text messages are sent directly to the recipient's cellphone number, so keep your contacts list updated frequently and you'll speed up the process.

Two things to keep in mind:

First, you can send more than just written text. Many phones allow you to attach photos, videos and audio files to messages — although larger files might be blocked by your carrier.

Second, if you plan to send text messages internationally, check with your wireless carrier before hitting send. Global texts are far more expensive.