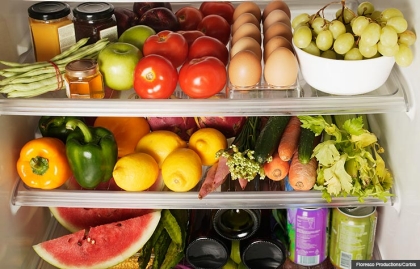 As nutrition director for the American Cancer Society (ACS), Colleen Doyle says she's regularly asked for some miracle list of superfoods that will prevent cancer.

There's no such thing, Doyle says. But there are ways to eat that reduce cancer risk in general, and specifically the risk of colorectal cancer, the third leading cause of cancer deaths in the United States.

The food we eat is among the things we control that can reduce colon cancer risk. When it comes to diet, here is what the ACS advises:

Limit red meat and processed meat. Stats show that eating red meat daily and processed meats several times a week increases colorectal cancer risk. Red meat may raise colon cancer risk because potential carcinogens form when it's cooked at high temperatures, and because the iron in it generates free radicals that can cause cancer-inducing DNA damage. In processed meats, some substances used to prolong shelf life contribute to compounds that can damage DNA.

"I don't think the ACS would tell people, 'Don't even have one hot dog, ever,'" Doyle says, "But if you're somebody who eats cheeseburgers and steaks every day, you want to think about cutting down and looking at alternatives."

Increase fruits, vegetables and whole grains. "We're seeing less colon cancer in people who eat a mostly plant-based diet — lots of fruits and vegetables and whole grains," Doyle says. To reduce colon cancer risk, "you want to eat a diet with lots of colorful fruits and vegetables. We encourage people to eat at least five servings a day with lots of variety and lots of color. We also encourage people to incorporate more legumes and beans, as an alternative to red meat. And we encourage people to eat whole grain products — with breads, cereals and pastas, look on the ingredient list and be sure that 'whole something' is the first ingredient."

Limit alcohol. "There's some evidence that alcohol consumption can increase the risk of colon cancer in both men and women," Doyle says. So ACS joins other health organizations in recommending that women have no more than one drink a day and men no more than two drinks (with one drink defined as 12 ounces of beer, 1.5 ounces of hard liquor or 5 ounces of wine).