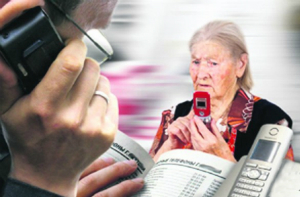 Many consumers believe that salespeople nice young men or women simply trying to make a living. They may be pushy or exaggerate the offer, but they’re basically honest. While that’s true for most telemarketers, there are some whose intentions are to rob people, using phones as their weapons. The FBI says that there are thousands of fraudulent telemarketing companies operating in the United States. There are also an increasing number of illegal telemarketers who target U.S. residents from locations in Canada and other countries.

It’s difficult for victims, especially seniors, to think of fraudulent telemarketers’ actions as crimes, rather than hard sells. Many are even reluctant to admit that they have been cheated or robbed by illegal telemarketers.

THE FIRST STEP in helping older people who may be targets is to convince them that fraudulent telemarketers are hardened criminals who don’t care about the pain they cause when they steal someone’s life savings. Once seniors understand that illegal telemarketing is a serious crime—punishable by heavy fines and long prison sentences—they are more likely to hang up and report the fraud to law enforcement authorities. They can help catch the crooks and put them in jail—where they belong.

THE SECOND STEP in fighting telemarketing fraud against seniors is to understand why they are particularly vulnerable. It’s a myth that victims are incompetent, lonely, or isolated. In fact, AARP research shows that many older victims are active people who are simply lured by false promises of great deals or ways to add to their "nest eggs." Fraudulent telemarketers take advantage of the fact that:

It’s difficult to tell whether someone is legitimate. Good salespeople are convincing, but so are crooks. They use many of the same sales tactics—being friendly, getting people excited, creating a sense of urgency;

Seniors tend to be trusting. Since they have difficulty imagining that some telemarketers are criminals, they’re more likely to give them the benefit of the doubt;

It’s easy to wear people down. Seniors are targeted relentlessly—some get more than 20 calls a day from scam artists. They may also receive dozens of mailings every week asking them to call about sweepstakes and other offers;

We all want to believe. Who doesn’t want to win a valuable prize, take a free trip, or strike it rich on an investment? People want to believe that it’s their lucky day, and may react with anger or suspicion when others question their optimism; and,

It’s hard to hang up. Many seniors feel that it’s impolite to hang up on people. Swindlers know how to take control of the conversation and are prepared to tell any lies necessary to keep potential victims on the phone.

THE THIRD STEP is helping older people recognize the "red flags" of fraud:

A promise that you can win money, make money, or borrow money easily;

A demand that you act immediately or else miss out on this great opportunity;

A refusal to send you written information before you agree to buy or donate;

An attempt to scare you into buying something;

Insistence that you wire money or have a courier pick up your payment; and,

A refusal to stop calling after you’ve asked not to be called again.

The common thread that runs through all telemarketing scams is the demand for payment upfront. Seniors need to know that:

It’s illegal for companies that operate contests or sweepstakes to ask you to pay to enter or claim your prize or even to suggest that your chances of winning will improve if you buy something;

It’s illegal for telemarketers to ask for a fee upfront to help you get a loan if they guarantee or strongly imply that the loans will be made;

There is no reason to give your credit card number or bank account number to a telemarketer unless you are actually making a payment with that account; and,

If you have to pay first before getting detailed information about the offer, it’s probably a scam.

THE FOURTH STEP is to recognize when older people have been victimized or may be in grave danger and know how to help them. Seniors may be in trouble if they:

Get frequent calls from strangers offering great deals or asking for charitable contributions;

Make repeated and/or large payments to companies in other states or countries;

Have difficulty buying groceries and paying utility and other bills;

Subscribe to more magazines than anyone could normally read;

Receive lots of cheap items such as costume jewelry, beauty products, water filters, and knick knacks that they bought to win something or received as prizes;

Get calls from organizations offering to recover, for a fee, money they have lost to fraudulent telemarketers.

If you are trying to help an older person with a telemarketing fraud problem, don’t be critical. It could happen to anyone—con artists are very good at what they do. Encourage them to:

Report actual or attempted fraud via Fraud.org's Online Complaint Form. That information will be transmitted to law enforcement agencies;

Change his or her phone number if con artists call repeatedly; and,

Change his or her bank account or credit card numbers if they have fallen into the hands of thieves.

THE FIFTH STEP in fighting telemarketing fraud is to inform older people about how to reduce the number of unwanted sales calls and mailings they receive and how to deal effectively with telemarketers.

Avoid getting on sucker lists. Don’t fill out contest entry forms at fairs or malls—they are a common source of "leads" for con artists. Ask companies you do business with not to share your personal information with other marketers.

Know your "Do-Not-Call" rights. Under federal law, you can tell a telemarketer not to call you again. Ask your state attorney general’s office or consumer affairs department if there is a state "Do-Not-Call" law and how it protects you.

Know who you’re dealing with. If it’s an unfamiliar company or charity, check it out with your state or local consumer protection agency and the Better Business Bureau.

Screen your calls. Use an answering machine, Caller ID, or other services that may be available from your phone company to help you determine who you want to talk to and who you want to avoid.

Have a plan for speaking to telemarketers. Before you pick up the phone, know what questions you want to ask or what you want to say. Be polite, but firm. Hang up if someone refuses to answer your questions or you detect the "red flags" of fraud.

Know that your phone number may be collected. When you call a company, your number can be displayed through Automatic Number Identification (ANI). If you have an account with the business, this enables the customer service representative to pull up your records and help you faster, but ANI can also be used for marketing purposes. Ask what information is being collected and tell the company if you don’t want to be put on a marketing list.