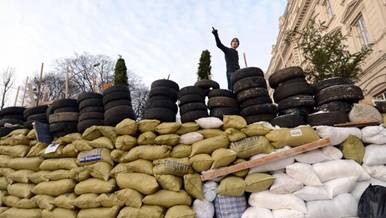 By Neil Buckley and Roman Olearchyk in Kiev

Ukraine’s prime minister resigned on Tuesday and parliament repealed deeply unpopular anti-protest laws, as President Viktor Yanukovich tried to ease the country away from confrontation and preserve his own job after two months of roiling protests.

In what may yet prove a turning point, an emergency parliament session that will continue on Wednesday also moved towards delivering other opposition demands. These include an amnesty for protesters and constitutional changes that would reduce the president’s powers.

But it remained unclear if protesters on Kiev’s streets would accept the package, which emerged after talks between Mr Yanukovich and opposition leaders in recent days. Mr Yanukovich’s concessions – while extensive – ignore one of the opposition’s central demands: for the president to resign or hold early elections.

Some Kiev officials also warned that removing the hardline Yanukovich ally Mykola Azarov as prime minister could put at risk a $15bn bailout for Ukraine’s tottering economy and $5bn gas price reduction promised by Russia last month. Speaking after an EU-Russia summit in Brussels, Russia’s President Vladimir Putin said Moscow’s financial support did not depend on who was in power.

The protests broke out after Mr Yanukovich backed away from signing an integration agreement with the EU under pressure from Moscow and instead accepted the Russian bailout.

Foreign diplomats in Kiev suggested Tuesday’s developments could potentially provide a route out of a crisis that has threatened to wrench Ukraine apart in recent days. But they warned that many details remained to be resolved.

Much would depend on the ability of the opposition leaders Arseny Yatseniuk, a former central bank governor, and Vitali Klitschko, the former boxer, to persuade thousands still massed on the Maidan, Kiev’s central square – and more radical groups among them – to accept the deal.

Protesters have become more determined to see Mr Yanukovich step down after pitched battles with riot police last week claimed at least four lives. Mr Klitschko continued to echo their call on Tuesday night, saying it was “logical” for Mr Yanukovich to step down.

Popular anger is also very high over recent abductions and brutal beatings of protesters and journalists. Activists say they are searching for 27 missing protesters in Kiev alone, including the leader of recent car-borne protests, with another protester found dead after being beaten and dumped in a forest outside the city.

Battles and stand-offs could continue. Talks on the opposition joining the government are not going anywhere

Vadim Karasiov, a political analyst, said Tuesday’s developments were only the first step in a possible peace.

“Battles and stand-offs could continue,” he said. “Talks on the opposition joining the government are not going anywhere.”

Mr Yanukovich’s Regions party threw down the gauntlet to opposition leaders to start leading protesters off the streets. Nestor Shufrich, a Regions party MP, said three of the opposition’s four main demands had been delivered, including repealing harsh anti-protest laws rammed through parliament on January 16, changes to the government, and the proposed amnesty.

But he added that holding early presidential elections had no basis, since Mr Yanukovich had been democratically elected president in a 2010 poll judged broadly fair.

“We are giving the Maidan all signals that they have no basis for extremist actions,” Mr Shufrich said. “We today are sending a signal to law enforcement bodies not to use the amount of force that they are entitled to use.”

While Mr Putin insisted Russian financial support did not depend on the composition of Ukraine’s new government, analysts said any move to rekindle talks on an EU agreement was likely to jeopardise Moscow’s bailout, which comes in instalments.

Igor Shuvalov, Russia’s deputy prime minister, seemed to echo that view. “If the Ukrainian government, whatever it is after its formation, announces a different agenda and different priorities, then this would probably be grounds for us to revise the agreements,” he was quoted as saying by Interfax news agency.

Mr Yanukovich also called US Vice-President Joe Biden to update him on events in Ukraine. The vice-president welcomed the progress made and urged President Yanukovich to sign the parliament’s repeal of several of the January 16 laws without delay.