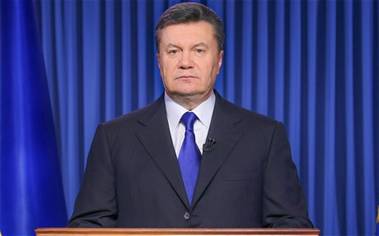 By Roland Oliphant, in Kiev and Josie Ensor

Ukraine's President Viktor Yanukovych said anti-government protesters had "crossed the limits" by taking to the streets to try to oust him from power, as the number of dead rose to 25.

In an address to the nation on Wednesday after the bloodiest day since demonstrations broke out in November, Mr Yanukovych blamed opposition leaders for the latest violent protests, urging them it was "not too late to stop the conflict".

"The leaders of the opposition have disregarded the principle of democracy according to which we obtain power through elections and not on the street ... they have crossed the limits by calling for people to take up arms," he said.

"It is a flagrant violation of the law and those who are responsible will face justice."

Mr Yanukovych has defiantly refused a chorus of calls from global leaders and opposition parties to halt a ferocious assault on anti-government protesters on the bloodiest day since demonstrations broke out in November.

According to the health ministry, at least 25 people are dead and large parts of Kiev’s occupied Independence Square are burning after a bloody escalation of Ukraine’s three-month political crisis.

The scene in what is known locally as the Maidan has been described as apocalyptic, with explosions echoing around central Kiev and the iconic square effectively turned into a war zone.

Smoke from burning tyres billowed up into the cold night air, while laser lights, flags and the glare of several fires from burning tents flickered over the crowd.

Even the opposition headquarters, the imposing Trade Union House, went up in flames, and a frantic effort was mounted to save people inside. Many jumped from windows and were caught by protesters using tents.

“If we hold on until morning, we have a chance to make it out,” one protester said.

Police continued to make small gains over night, pushing further into the square at weak points and forcing protesters to torch tents, equipment and other detritus in an attempt to extend their fire barricade.

But the offensive that began the day seemed to have ground to a halt by midnight - halted, protesters said, by the destruction by firebombs of a police APC and a water cannon truck.

Protesters had been preparing for an assault on their camp in independence square for over a month, and the street fighting skills they learnt during the out break of violence in January was on full display in the early hours of Wednesday morning.

Volunteers ripped up vast swathes of pavement to provide cobble stones for the front line, while human chains maintained a steady supply of tires, wood and other fuel to the barricades.

Deprived of the hospital that ran for three months in the House of the Unions, medics treated walking wounded in the open air.

In a pancake cafe at the back of the square medics on blue scrubs performed surgery on injured protesters sprawled across table-tops, painstakingly removing the shrapnel from the bloodied back legs of two patients.

Both patients were wounded worse on the back legs and buttocks - symptomatic of turning away from an incoming stun grenade before it explodes.

Yet amidst all the chaos, the daily life of Maidan carried on almost as normal. Above the din of explosions speakers continued to address a crowd of thousands as they have for three months, leading them in prayers, renditions of the national anthem, and exhortations to "take not one step back."

But with Mr Yanukovych declaring the violence an "armed rebellion," and activists in Western regions reportedly raiding police arms depots, many here are now whispering two words that were unthinkable even a month ago: civil war.

The entrenched position of the president was clear earlier in the night, when a meeting between Mr Yanukovych and opposition leaders failed to find a solution to the crisis.

“Yanukovych said that there is only one option... to clear Maidan and that everyone has to go home,” opposition leader Vitali Klitschko said.

Kiev was essentially in lockdown as authorities halted the city’s metro system and limited road traffic coming into the capital.

Another two civilians were found dead, but their bodies showed no exterior signs of violence, making it unclear how they had died.

More than 150 people were injured, including dozens of police officers, some with serious wounds.

As the turmoil intensified, US Vice President Joe Biden phoned Mr Yanukovych to express his concern and urge him to “pull back government forces and to exercise maximum restraint,” said a White House statement.

UN chief Ban Ki-moon called for restraint and dialogue, while Nato head Anders Fogh Rasmussen urged “all parties to refrain from violence and to urgently resume dialogue, including through the parliamentary process”.

German Foreign Minister Frank-Walter Steinmeier warned that the violence could lead to EU sanctions against those responsible.

Sweden’s Foreign Minister Carl Bildt tweeted: “Only person who can now stop catastrophe in Ukraine is President Yanukovich. His vacillation and violence responsible for situation.”

However a top Russian MP said Ukraine - which is divided between a pro-EU half and a pro-Russian half - was on the brink of a civil war that he claimed had been inflamed by the West.

“I consider that a significant amount of responsibility for this falls on the West and Western politicians, who are constantly putting pressure on the Ukrainian authorities,” Alexei Pushkov told Interfax news agency.

The violence erupted after the crisis appeared to have abated in recent days, with both sides making concessions which saw protesters vacate Kiev city hall after being granted an amnesty deal.

Early on Tuesday, some 20,000 anti-Yanukovych protesters clashed with police outside parliament as they rallied for MPs to strip the president of a raft of powers.

Running street battles broke out and protesters took back control of city hall and attacked Mr Yanukovych’s party headquarters with petrol bombs before smashing their way inside.

Mr Yanukovych’s ruling Regions Party said that an employee at its headquarters was found dead after the seizure of the building.

After threatening “grave actions” if the unrest did not cease, government sent in the riot police in the evening.

Police had warned women and children through loudspeakers to leave the square as they began their assault, which they described as “an anti-terrorist” operation.

But some 25,000 people, many of them wearing makeshift body protection and wielding iron bars and bats, remained to defy the riot squads.

Opposition leaders continued to adress the crowd as the assault took place.

“This is a small island of freedom,” the former boxing champion Mr Klitschko said, declaring the protesters were “not going anywhere”.

“The state has launched a war against its own people. Responsible democratic countries cannot stand back and let this happen.”

Meanwhile, in the pro-EU western city of Lviv, some 5,000 protesters took control of an arms warehouse after setting fire to military buildings with Molotov cocktails.

Prosecutor-general Viktor Pshonka warned he would seek the “harshest punishments” for those deemed to have been behind Tuesday’s violence.