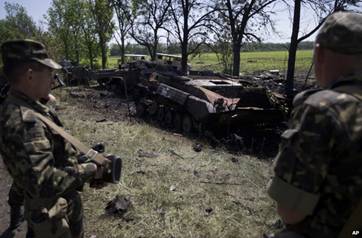 A dawn attack on a checkpoint in eastern Ukraine has left at least 14 soldiers dead, in the worst loss of life for government forces to date.

Ukraine's interim Prime Minister, Arseny Yatseniuk, has called for an emergency session of the UN Security Council, saying he has evidence of Russian involvement in the violence.

Russian President Vladimir Putin ordered troops near the border to withdraw to their bases earlier this week. Correspondents say removing the troops - estimated to number 40,000 - could help de-escalate the Ukraine crisis.

The election was called after the last elected President, Viktor Yanukovych, was deposed in February amid mass protests against his pro-Russian policies.