Nine soldiers killed after pro-Russian separatists shoot down helicopter, against their commander's orders to respect ceasefire 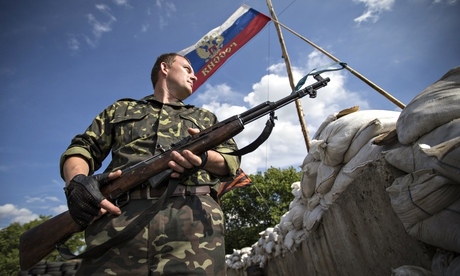 The US vice-president, Joe Biden, spoke with Ukraine's president on Tuesday after pro-Russian insurgents downed an army helicopter against ceasefire orders from their commander, the White House said.

The incident, in which nine Ukrainian soldiers were killed, could torpedo hopes that Ukraine's western-backed president, Petro Poroshenko, – having ordered a one-week unilateral ceasefire on Friday that the rebels accepted on Monday – will be able to negotiate an end to 11 weeks of violence that has claimed 435 lives, according to UN figures.

Biden "offered condolences for the deaths of Ukrainian service members, including the shooting down of a Ukrainian transport helicopter in eastern Ukraine," a White House statement said of the third phone call with Poroshenko in as many days.

Biden "underscored the importance of having monitors in place to verify violations of the ceasefire, as well as the need to stop the supply of weapons and militants from across the border. The two leaders agreed to remain in close contact," it added.

Obama and Cameron "agreed that should Russia fail to take these immediate steps to de-escalate the situation in eastern Ukraine, theUnited States and the European Union would work to implement additional coordinated measures to impose costs on Russia," a White House statement said.

The Donetsk region where the helicopter was hit and the neighbouring Luhansk province proclaimed independence in May in the wake of the February ousting in Kiev of the pro-Russia president Viktor Yanukovych.

But the Russian president, Vladimir Putin, decided not to follow up his March annexation of Crimea by claiming control over the two territories in a land-grab that could have plunged Europe into all-out war.

He took another step aimed at appeasing the west by asking MPs on Tuesday to rescind their 1 March authorisation for Kremlin forces to occupy parts of Ukraine.

The Kremlin chief's decision came with Russia facing the threat of devastating western economic sanctions unless Putin took immediate steps to de-escalate the worst east-west crisis since the cold war.