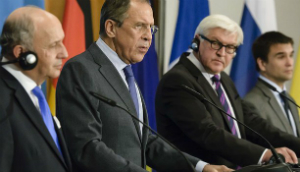 The foreign ministers of Russia, Ukraine, Germany and France say they have agreed on steps aimed at ending hostilities in eastern Ukraine.

Germany's Walter Steinmeier said they agreed in talks in Berlin on a "package of measures" that paves the way for a bilateral ceasefire.

Fighting in eastern Ukraine has increased since a shaky 10-day ceasefire expired on Monday.

Hundreds have been killed since a pro-Russian rebellion began in the east.

At least nine civilians were reported dead in an attack on a village in the Luhansk region on Wednesday, which the Ukrainian army and rebels blamed on each other.

Following talks in the German capital on Wednesday, the foreign ministers said they had agreed to hold three-way talks that includes the pro-Russian rebels "no later than 5 July".

"We propose to achieve this through a meeting soon of the Contact Group, which - we hope - will hold a meeting in coming days and agree on the conditions for truce that would satisfy all sides," Russian Foreign Minister Sergei Lavrov told reporters after talks concluded.

The contact group represents Ukraine, Russia and the Organisation for Security and Cooperation in Europe (OSCE). 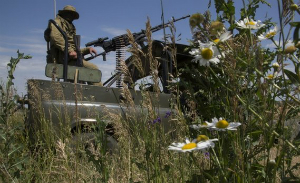 Ukraine's Pavlo Klimkin, however, warned that all hostages must be released and that Ukraine should be given greater control of its borders to stop insurgents receiving fresh fighters and weapons.

"The de-escalation of the situation will happen when the peace plan of the Ukrainian president is respected in its totality," Mr Klimkin said.

The talks were called by Mr Steinmeier, who warned that in the past 48 hours the situation had "dramatically escalated... and might get totally out of control".

Violence has worsened in eastern Ukraine since the 10-day unilateral ceasefire, called by Ukrainian President Petro Poroshenko, ended on Monday, with both sides accusing the other of violations.

The civilian deaths in the village of Luhanska came in the early hours of Wednesday morning, with amateur videos on YouTube showing ruined buildings and bodies on a street. Neither the reports of casualties nor the videos could be verified independently. 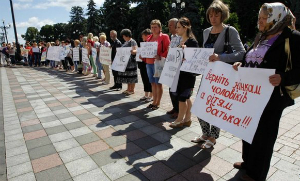 The rebels said nine people died when the Ukrainian army shelled and bombed the village, but Ukrainian officials deny that their forces were in the area, blaming the deaths on the rebels.

Rebels in Donetsk say two of their fighters died in fighting on Wednesday at Nikolayevka and three members of the same family were killed in the Kramatorsk-Sloviansk area (Donetsk) by government shelling.

Ukraine says it lost one soldier after its troops fought off rebel attempts to break an army encirclement in Sloviansk.

The violence erupted in eastern Ukraine in April as separatists declared independence in the Donetsk and Luhansk regions. Russia annexed the Ukrainian region of Crimea in March.

The crisis was triggered last November when, under pressure from Russia, Ukraine's President Viktor Yanukovych decided not to sign a deal bringing Ukraine closer to the EU. This led to protests in Kiev and his eventual overthrow.