Briefly about the most important today's events, and

what goes on in Ukraine in general in the digest of events. 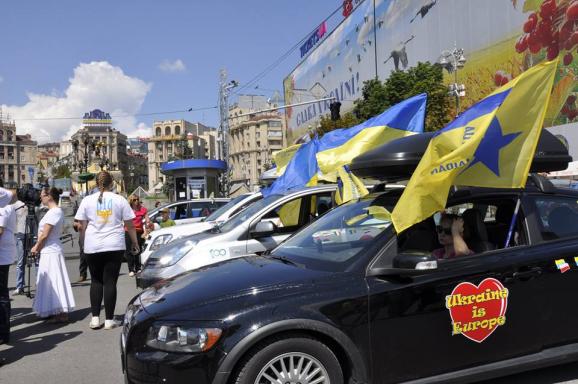 Automaidan has begun a car rally across Europe

"Automaidan-Kyiv" is on its way to European countries to spread the truth about Donbas and the ATO and solicit support of the world community opinion for denouncing the media war, which the Russian Aggressor wages against Ukraine nowadays.

Participants of Automaidan (car-borne protests) are ready to talk to politicians, journalists and every European about what really goes on in the east of Ukraine. The activists have planned to meet with French President Francois Hollande and German Chancellor Angela Merkel. Here is a time schedule for their planned actions:

The participants of the action plan to come back to Kyiv on August 5, and to hold a final mass meeting at the European Square in the heart of the Ukrainian capital.

A violent removal of 28 (?) dead passengers' bodies carried out by militants can prove that an instructor must have arrived and pointed out which of the bodies were to be taken away. And those are bodies, in which there is a possibility to find fragments of a rocket or ammunition used for shooting down the plane. One can define using dead bodies a penetration angle of splinters, a starting point of the burst, and so on. That is irrefutable evidence.

There must be other specialists present there who know well, how this sort of plane crashes is normally investigated and also know what has to be taken away, destroyed or burnt on the spot. Russia has huge experience in investigating such cases.

But international experience in investigating such cases exceeds that of Russia. Russia understands very well that the results of this investigation will have dire consequences for Putin in case international investigators obtain all the necessary evidence to establish the truth.

National Security Council: a guerrilla movement is being established in Donbass region

A resistance movement against armed formations organised by local residents has started arising in Donetsk and Lugansk.

According to spokesman for the National Security and Defence Council Andriy Lysenko, "men are sick and tired of watching, how bandits rob, kill and treat cruelly local residents".

According to the National Security Council, such people want to group together and wreak vengeance upon rebels for their violence towards women and children by using captured weapons.

According to the OSCE, 250 people were killed and 850 others were wounded in Lugansk region during hostilities which took place in June and the first half of July this year.

Ukrainian troops in the zone of ATO have launched a military offensive, Secretary of the National Security Council Andriy Parubiy reports.

According to the official, law-enforcement units launched an operation, which main objective is assuming the offensive; this information has also been confirmed by Defence Minister Valeriy Heletey, who is currently in the area of ATO.

A burial place of civilian residents tortured to death at the hands of pro-Russian and Russian militants was found in Slovyansk - in a city that had recently been freed from terrorists, advisor to the President of Ukraine Yuriy Lutsenko announced today. "There are dozens of them there. They were tortured, cut, and burnt alive. There are witnesses of this", said Yuriy Lutsenko.

ATO forces attacked a terrorists' convoy and defeated them; some of the captured militants are from the Russian Federation

Three armoured vehicles were destroyed, 23 Russian militants captured including the leader of their squad. There are a few Chechens among the captives.

All the militants possess Russian citizenship.