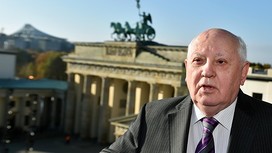 Former Soviet Union leader Mikhail Gorbachev warned on Saturday that the Ukraine crisis had brought the world to “the brink of a new cold war”.

“The world is on the brink of a new cold war. Some say it has already begun,” said the 83-year-old former Kremlin chief in a sombre speech delivered in Berlin at an event to mark the 25th anniversary of the fall of the Berlin Wall this weekend.

He was speaking as reports from eastern Ukraine suggested that Kiev’s troops and the Russia-backed rebels may be preparing for renewed fighting. Agency reporters in eastern Ukraine said they saw more than 80 unmarked military vehicles on the move on Saturday in rebel-controlled areas of eastern Ukraine.

The apparent escalation threatens the fragile ceasefire agreed in Minsk in early September and increases the danger of further pressure on east-west relations.

Speaking at a conference within a few metres of the iconic Brandenburg Gate, Mr Gorbachev accused the west, led by the US, of “triumphalism” after the fall of the Berlin Wall ended Soviet dominance in eastern Europe.

Trust between Russia and the west had “collapsed” in the last few months, he said, highlighting the damage done by the Ukraine crisis. He called for new initiatives to restore trust, including a lifting of personal sanctions imposed by the US and the EU on top Russian officials in response to Moscow’s actions in Ukraine.

Mr Gorbachev clearly sees the west as the culprit in the crisis, having given his unequivocal backing to Mr Putin last week. He said, before arriving in Germany, that he was “absolutely convinced that Putin protects Russia’s interests better than anyone else”.

The world is on the brink of a new cold war. Some say it has already begun.

The former Soviet Union leader’s remarks were echoed by Roland Dumas, who was French foreign minister 25 years ago. Speaking at the same event, Mr Dumas warned that without respect of one nation for another, “everything could start over again tomorrow. Even everything we used to know and what we called the cold war.”

Barack Obama, US president, has also expressed concern that the peace of Europe is once again under threat. In a statement on Friday, marking the 25th anniversary of the Berlin Wall’s fall, he said: “Nations across central and eastern Europe stand tall as proud democracies. Europe is more integrated, more prosperous and more secure. But as Russia’s actions against Ukraine remind us, we have more work to do to fully realise our shared vision of a Europe that is whole, free and at peace.”

Meanwhile, in a grim reminder of the human consequences of war, Bert Koenders, the Dutch foreign minister, on Saturday warned that remains of nine victims of the MH17 aeroplane disaster may never be found.

He was speaking as five coffins were flown out of Ukraine, in the latest transfer of the victims’ remains out of the country. The Malaysia Airlines jet was shot down over rebel-held territory in July, with the loss of all 298 on board, including 193 Dutch people.

Kiev claims the rebels downed the plane with a Russia-supplied missile. Moscow denies the charge and blames Ukrainian forces.

In Berlin, thousands are converging on the city centre for events including exhibitions and memorial services, culminating on Sunday night in a concert at the Brandenburg Gate and the release of hundreds of illuminated white balloons along the route of the former dividing wall.