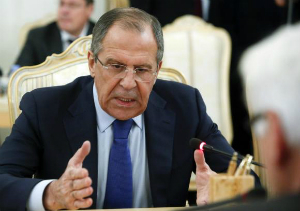 (Reuters) - Russian Foreign Minister Sergei Lavrov said on Wednesday Ukraine's leaders must talk directly to separatists in the east of the country and should not treat Moscow as a party to the conflict.

Kiev and the West accuse Russia of destabilizing Ukraine by providing the rebels with money, arms and reinforcements. The West has imposed sanctions on Moscow over the conflict in which more than 4,000 people have been killed since mid-April.

Russia backs the separatists who have rebelled in the east but says it is not directly involved in the conflict in the Donbass region.

"As the next step, we are calling for the establishment of stable contacts between Kiev and Donbass representatives with the aim of reaching mutually acceptable agreements," Lavrov told the lower house of parliament.

He said the "party of war" - supporters of Kiev's military campaign against the rebels - had tried to exclude the separatists from peace moves and to "force the West to seek the consent of Russia to act as a side in the conflict."

"This is a completely counter-productive and provocative line that has no chance of succeeding," the veteran minister said.

A ceasefire deal reached on Sept. 5 has been repeatedly violated and Lavrov and German Foreign Minister Frank-Walter Steinmeier failed to overcome deep rifts during talks in Moscow on Tuesday.

Lavrov suggested that despite the rift, Russia's "partners" accept that the Crimea peninsula, annexed by Russia in March, would not be returned to Ukraine's control.

"Crimea is an inseparable part of Russia and we carry full responsibility for it," Lavrov said.

"Why force people to make some statements? We see clearly that in practice our allies work on the basis of the reality that occurred in fact. That is key for us."

He also said Moscow was not to blame for strains in relations with the European Union over the Ukraine crisis and wanted good ties with Brussels.

"The current negative trend in global affairs is not our choice," he said.