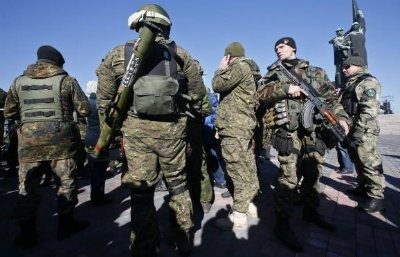 Militants increase combat activity with 30 attacks during the evening

Rebels have significantly intensified their activity along the demarcation line, the ATO press centre reports.

Gunmen breached the armistice 30 times in the period between 6 pm and midnight, it adds.

In the Donetsk region, illegal paramilitaries carried out 7 attacks on an army stronghold near the village of Shyrokine committing to action mortars, tanks, 122-mm self-propelled artillery weapons, AA mounts, as well as grenade machine guns and machine-guns.

Also, positions of ATO forces near the settlements of Opytne, Pisky, Mayorske, Leninske, Avdiyivka, Kirovo, and Maryinka were attacked by insurgents with mortars, grenade machine guns, and machine guns. In general, rebels fired on army positions 19 times in these areas.

In the Lugansk region, militants fired grenade machine guns on positions of Ukrainian troops stationed near the town of Schastya.

No attacks on inhabited settlements were reported there.

Also, Ukrainian servicemen recorded 8 UAVs over the ATO area during the mentioned period.

and increases its presence on the border

The United States on Wednesday accused Russia of building up air defence systems inside eastern Ukraine and of involvement in training exercises of pro-Russian rebels in breach of a European-brokered truce.

"This is the highest amount of Russian air defence equipment in eastern Ukraine since August," State Department spokeswoman Marie Harf said in a statement.

She said the increasingly complex nature of the training exercises "leaves no doubt that Russia is involved."

Fighting has picked up in eastern Ukraine in recent weeks despite the ceasefire agreed in February, with each side accusing the other of violence. Russian Foreign Minister Sergei Lavrov said on Monday he believed a surge in ceasefire violations had however passed.

But Harf said Russia was building up its forces along the Ukrainian border.

"After maintaining a relatively steady presence along the border, Russia is sending additional units there," she said, adding that the increase marked the largest presence of Russian troops on the border since October.

More than 6,000 people have been killed since the conflict in eastern Ukraine erupted more than a year ago, when rebels opposed to the ousting of a Moscow-backed president and the installation of a pro-Western government declared independence from Kiev.

Ukraine and its Western allies have long accused Moscow of sending troops and weapons to support the rebels, a charge Russia has denied.

The United States and Europe have imposed sanctions against Moscow over its role in the Ukraine crisis, warning that the measures will only be lifted once Russia fulfils the ceasefire signed in Minsk.

Militants attack near Schastya and attempt to cut into rear

of the Armed Forces of Ukraine

Militants have intensified fighting in areas to the north of Lugansk, the founder of the Information Resistance Group, Dmytro Tymchuk writes.

"A number of rebel groups armed with AT assault weapons and sniper rifles attacked forward positions of the Ukrainian army," he posted on Facebook.

"Terrorists do not stop attempts to infiltrate into the tactical depth of defence of Ukrainian troops by using either separate rebel units or sabotage-reconnaissance groups," he said.

Militants shell a TPP near Schastya

The attack aimed at a thermal power plant was carried out from the rebel-held village of Vesela Gora located close to Schastya.

No destruction was reported as a result of shelling, no civilians and servicemen were hurt.

Apart from the one in Schastya, a number of local skirmishes (gun battles with automatic weapons and grenade launchers) occurred in the Stanychno-Lugansk district, namely in the villages of Nyzhnye Teple and Artem, as well as on the outskirts of Katerynivka in the Popasna district.

122 trucks entered into Ukraine from Russia as a humanitarian convoy on Thursday, an assistant to the head of the State Border Guard Service of Ukraine, Oleg Slobodian said at a briefing, according to "Ukrainian News".

According to him, two columns of humanitarian convoy crossed into the country between 7.20 and 8.35 on Thursday.

He reported that the convoy was carrying non-humanitarian aid.

7 Ukrainian service members sustained wounds in the past 24 hours in the ATO area, a spokesman for the Ukrainian National Security and Defence Council, Andriy Lysenko, reported at a briefing on Thursday. "No one died, but seven servicemen were wounded as a result of hostilities in the past 24 hours," he said.

According to Motusyanyj, the number of rebel attacks increased in the past 24 hours. Also, 17 enemy drones were spotted over the Donetsk region yesterday.