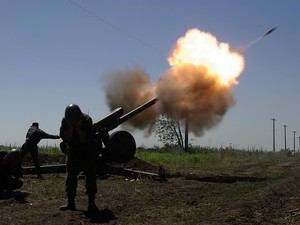 The intensity of attacks has increased in Donbass; rebels have fired on the TPP near Schastya; their attacks near Pavlopol and Chermalyk have been stemmed by Ukrainian military, the head of the Information Resistance Group, Dmytro Tymchuk, posted on Facebook on the morning of March 29.

"The intensity of attacks has increased," he said.

Rebels carried out 29 shell strikes on army positions with mortars and Grad MLRSs.

The situation in the area of the antiterrorist operation remained tense on the evening of April 28 in Donbass.

Rebel groups attacked military positions along the demarcation line 29 times in the period between 6 pm and midnight, the ATO press centre reports.

Furthermore, terrorists fired two times on the settlements of Chermalyk and Schastya.

The enemy resumed attacks on our positions near Avdiyivka at 6 pm with Grad MLRSs."

Illegal paramilitaries carried out chaotic assaults on our positions near Chermalyk with mounted grenade launchers and 82-mm mortars from the left bank of the Kalmius river.

The enemy fired 120-mm mortars, grenade machine guns, and sniper rifles on the Lugansk thermal power plant located in the town of Schastya.

Furthermore, Ukrainian servicemen recorded 15 enemy UAVs in the sky over the Donetsk and Lugansk regions.

and tanks redeployed to Donbass

Some additional troops of the Russian Army have been moved to Donbass, the founder of the Information Resistance Group, Dmytro Tymchuk, reports.

"The process of redeploying Russian troops goes on," he writes on Facebook on the morning of April 29.

A 350-strong tactical task force of Russian and rebel forces was moved to forward positions near Novoazovsk.

a column of materiel went through the town

According to Gorlivka residents, a battle has been raging near the town since 11 pm April 28, despite the agreement on a cease-fire, the Gorlivka site 06242 reports.

A column of heavy armaments went through the town in the north-west direction heading to a vehicle testing point, from where a number of artillery strikes were carried out in the direction of government-held Dzershinsk.

“Locals say that this battle has been the fiercest one since the ceasefire deal was inked," the site informs.

Combat activities have sharply intensified along the demarcation line in the Lugansk region, with the town of Schastya repeatedly attacked, and armed clashes in Krymske and Tryokhizbenka, Head of Lugansk Regional State Administration Gennady Moskal reported on his official page on Wednesday.

He informs that rebels attacked Schastya on Tuesday evening twice with grenade launchers and automatic weapons. The attack was carried out from the side of Vesela Gora first at 5, and then 6 pm. No casualties among civilians were reported.

Fighting repeatedly broke out between government-held Krymske and rebel-held Sokolnyky on Tuesday, and sometimes grew into gun battles with grenade launchers and mortars.

Fighting broke out between Ukrainian military and rebels on Wednesday morning in Tryokhizbenka, resulting in three soldiers wounded, Head of Lugansk Regional State Administration Gennady Moskal reports on his official page on Wednesday.

He also adds that a rebel sabotage and reconnaissance group neared a ruined bridge across the Siversky Donets River, which serves as the demarcation line and attacked our troops with sniper rifles and automatic weapons.

A gun battle broke out with three soldiers wounded as a result (two of them sustained serious wounds).