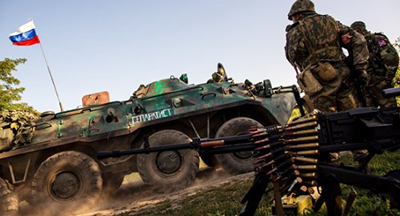 Donbas rebels have practiced attacking drills aimed at capturing defensive fortifications, a spokesman for the Ukrainian National Security and Defence Council, Andriy Lysenko, reported at a briefing on Thursday.

According to him, the situation in the ATO area remains tense.

According to the ATO spokesman, Russian and terrorist forces continue to violate the Minsk agreement by firing banned weapons.

Ukrainian military recorded 10 attacks with 120-mm mortars and 2 attacks with 152-mm artillery in the past 24 hours. The enemy also committed to action a tank.

The most intense activity of illegal armed formations was registered in the Mariupol direction near the settlement of Shyrokine. 12 attacks were carried out there with different types of weapons in the past 24 hours.

Inhabited settlements adjacent to the Donetsk airport and the town of Gorlivka are the most troublesome flash points in the Donetsk direction.

In the Lugansk direction, rebels intensified their activity near the town of Schastya. Several breaches of the ceasefire were recorded near the settlements of Kryakivka, Orikhove, and Stanyzia Luganska.

Rebels attacked there mainly with mortars, grenade launchers, and machine-guns. Most attacks occur in the afternoon or in the evening.

7 drones were observed over the ATO area in the past 24 hours, Lysenko said.

Terrorists have attacked positions of Ukrainian troops with 120- and 82-mm mortars, grenade machine guns and machine-guns, the ATO press centre announced in its report.

Illegal paramilitaries breached the ceasefire 11 times over the period from 6 pm to midnight May 6. The enemy carried out intense attacks on army positions with 120- and 82-mm mortars same as on the previous days.

Gunmen repeatedly fired mortars near the settlements of Pisky, Mayorsk, and Granitne.

The enemy assaulted our positions in and around Schastya and Troizke, Lugansk region, mainly with grenade machine guns and machine-guns.

It shelled Ukrainian troops stationed near Kryakivka and Orikhove-Donetske twice with 82-mm mortars.

Village of Artem and the town of Schastya shelled in the morning. Residential buildings hit

Rebels mortared the village of Artem in the Stanychno-Lugansk district of the Lugansk region.

According to information provided by the governor of the Lugansk regional state administration on his webpage, shelling was carried out from the side of the village of Vesela Gora located by the Siversky Donets river.

Moreover, insurgents attacked the town of Schastya from the very same positions in Vesela Gora on Thursday morning.

“No information on casualties was received," Moskal reported.

even without camouflaging them

"Heavy equipment manoeuvres are carried out openly and without camouflaging," he wrote on Facebook on May 7.

In particular, according to the IRG, rebels fired 120-mm mortars and 122- and 152-mm SP artillery near Shyrokine in the Mariupol direction.

The adversary carried out activities in small mobile groups in the above mentioned areas, Tymchuk writes.

Rebels also fired 82-mm mortars, grenade machine guns, ZU-23-2 AA mounts on army positions near the settlements of Schastya and Stanyzia Luganska in the past 24 hours.

No losses were reported in the area of the anti-terrorist operation in the past 24 hours, a spokesman for the Ukrainian National Security and Defence Council, Andriy Lysenko, reported at a briefing on Thursday.