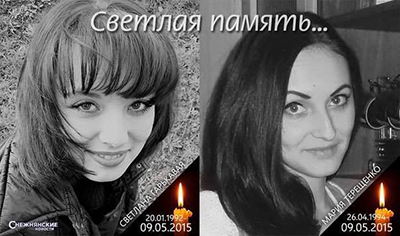 Two residents of Snizhne, Donetsk region, Svetlana Harkava and Maria Tereshchenko were killed by so-called "insurgents" of PRD commandant's office on the evening of May 9, UKRINFORM announced with a reference to the internet site "Chetverta Vlada" [Fourth Estate].

The car, driven by young people, was machine gunned by armed rebels just on the road for yet unknown reasons.

A young driver, who was affianced to one of the victims, also died.

As reported earlier, a civilian cyclist was killed earlier as a result of a rebel attack on the Yasynuvata district.

Rebels fired mortars in the Donetsk, Lugansk, Artemivsk and Mariupol directions from 6 pm, May 10, the ATO press-centre reports.

In the Donetsk direction, insurgents attacked Pisky with 120-mm mortars. A clash with a rebel sabotage and reconnaissance group occurred in the town at midnight.

Furthermore, rebels attacked the Dutovka mine.

Our troops deployed to Schastya and Krymske came under fire near Lugansk.

Insurgents fired upon the Schastya TPP, further destroying the infrastructure of Donbass.

In the Artemivsk direction, terrorists attacked Leninske and Mayorske with mortars, which had been banned by the Minsk agreement. Rebels fired anti-tank weapons and heavy machine-guns near Losove.

Among them, there are extreme-right-wing Euro-MPs from France Jean-Luc Schaffhauser and two Greek MPs, one of which is Simos Kedikoglou.

As reported earlier, Schaffhauser was once implicated in the scandal helping Marie Le Pen's National Front to get a 9-Million-Euro loan from a Russian bank.

According to some media, Le Pen received these funds for participating in an illegal referendum and for recognising the annexation of the Crimea.

No Ukrainian servicemen were killed, but 5 soldiers sustained wounds as a result of hostilities in the past 24 hours, a spokesman for the Presidential Administration on ATO issues, Oleksandr Motuzyanyk, reported at a briefing on May 11.

"Militants constantly violate the Minsk agreement committing artillery weapons, which should have been withdrawn in accordance with provisions of the Minsk ceasefire deal. Rebels carried out 16 attacks on ATO forces with 120-mm mortars, and one with 122-mm artillery," Motuzyanyk said.

The settlement of Pisky tops the list of the most troubled flash points with 10 attacks on army positions in the past 24 hours. The activity of illegal armed formations near the town of Gorlivka slightly decreased.

The village of Shyrokine near Mariupol was once again in the epicentre of confrontation between government forces and terrorists.

"17 breaches of the armistice on the part of illegal paramilitaries were reported in the past 24 hours. Rebels fired upon the settlements of Myrne, Chermalyk, Pischevyk," Motuzyanyk reported.