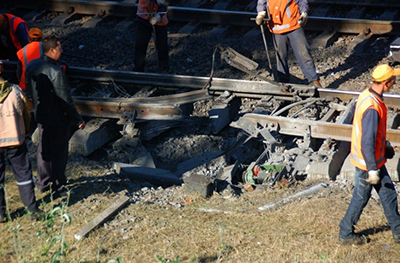 New explosion reported in Odessa. A railway bridge blown up

A railway bridge in the Slobodka district of Odessa has been blown up, a spokeswoman for the "Right Sector", Varvara Chernoivanenko wrote on her Facebook page.

The explosion occurred on a railway bridge crossing Malovskogo Street just before midnight, damaging railway, but causing no further harm.

The amount of damage done to rails is currently unknown, a correspondent of a local news agency reported.

Police closed off adjacent streets and experts are now working on the scene.

According to local residents’ posts on Twitter, the explosion was heard across the whole Balkovskiy district.

There have been a number of explosions in Odessa in recent months, mainly near offices of Ukrainian volunteer organizations.

Rebels attack positions of the Armed Forces of Ukraine near Gorlivka

PRD gunmen attacked positions of the Armed Forces of Ukraine located on the north-west edge of Gorlivka at around 10.50 pm yesterday, the "Gorlovka Media Portal" reports with a reference to locals.

As reported by Dzershinsk residents, the eastern outskirts of the town and the village of Artemovo bore the brunt of the rebel attacks. However, it became relatively calm at 1 am.

Gorlivka residents also reported in social media that a gas pipeline had been damaged.

Insurgents intensify their activity near Maryinka

Donbass rebels continue to assault positions of Ukrainian troops, including with heavy weaponry, the head of the Information Resistance Group, Dmytro Tymchuk, posted on Facebook on the morning of May 13.

In particular, army positions near Avdiyivka were bombarded twice with 152-mm artillery in the past 24 hours.

Furthermore, rebels fired 120-mm mortars on the settlements of Pisky, Krasnogorivka, Trudivsk, and the Dutovka mine.

In the Mariupol direction, separatists committed to action 122-mm cannons and 120-mm mortars near the settlements of Shyrokine.

The enemy used UAVs along the shore and in the direction of Mariupol, as well as over areas to the north of the city. Moreover, militants continued to move forces in the Mariupol direction.

Rebels also became more active in the area between Maryinka and Stepove.

Additionally, several sabotage and reconnaissance rebel groups were observed near the settlements of Schastya, Tryokhizbenka, and Krymske.

The enemy carried out 8 attacks on army positions near Schastya and Krymske with AHS-17 Plamya grenade machine guns.

Rebels move forces to front lines and in the Mariupol direction

Militants continue to move forces and equipment in the Mariupol direction, the founder of the Information Resistance Group, Dmitry Tymchuk, announced.

A PRD tactical task force consisting of 160 to 180 soldiers, including 12 tanks, 22 ACVs and several military vehicles came through Telmanove, he writes on Facebook.

New reinforcements were received by the Russian and terrorists forces stationed in Petrovsky and Kuibyshevsky districts of the Donetsk city.

Two groups consisting of 60 rebels each came to Donetsk through Makiyivka. In addition, military hardware was moved from an army ordnance depot in Yasynuvata to southern districts of Donetsk (a group of 7 tanks was spotted manoeuvring in the field accompanied by special vehicles).

Also, rebel troops were reinforced by regrouping existing forces and equipment and moving new ones from rear areas to join them.

A rebel armoured unit deployed to this sector received new equipment, namely 4 additional tanks and 3 ACVs, from the depot of a Gorlivka rebel garrison.

11 ACVs were moved to the east of Lugansk to the settlements of Nikolayivka and Stanyzia Luganska.

Also, a number of convoys were reported moving in the areas between Lutugine and Krasny Luch, Makiyivka and Yenakiyevo, Starobeshevo and Dokuchayevsk, in the city of Donetsk and in its suburbs, as well as in the direction of Lugansk and its two adjacent areas - Metalist and Lutuhyne.

"No deaths were reported in the ATO area in the past 24 hours; 10 soldiers sustained wounds," a spokesman for the Ukrainian National Security and Defence Council, MP Andriy Lysenko, reported at a briefing.

Lysenko explained that the majority of the wounded were victims of the latest rebel attacks on areas near the village of Luganske close to Svitlodarsk.

Furthermore, 23 enemy UAVs were reported spying in the ATO area, several of which were observed over the Azov Sea.