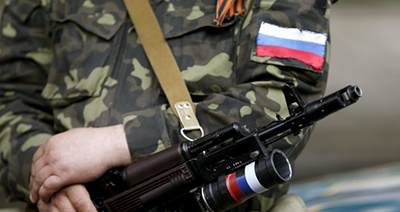 About 11 thousand Russian soldiers fight in Donbass, Ukrainian President Poroshenko said in an interview with the German channel ZDF on Thursday. He also added that peace is only possible in Donbas after the occupied territories have been reintegrated.

"I can see no military solution to the conflict in the east of Ukraine," he said.

Furthermore, Poroshenko asserted that a total of 83 Ukrainian soldiers had been killed and more than 400 wounded since the Minsk agreement was inked on February 12.

Intensity of shelling increases near Mariupol

According to the report, insurgents fired on the villages of Pisky, Opytne, Granitne, Krasnogorivka, Maryinka and the town of Avdiivka.

"The militants attacked the villages of Pisky, Opytne, Granitne, Krasnogorivka and Maryinka with mortars, grenade launchers, anti-tank weapons and other arms. Moreover, they committed tanks when attacking the town of Avdiivka and at the Butkivka mine," the report reads.

Gunmen increased the number and intensity of attacks near Mariupol. They carried out strikes on the villages of Shyrokine and Chermalyk, the press centre said.

Stanyzia Luganska attacked; a residential house destroyed as a result.

Schastya and the TPP were also hit

Stanyzia Luganska and adjacent territories were fiercely attacked with mortars, tanks and machine-guns in the period from 9 pm to midnight, May 13, the head of the Lugansk Regional State Administration, Gennady Moskal, reported on his webpage on the morning of May 14.

The attack was carried out from the right bank of the Siversky Donets, which is occupied by the so-called PRL.

No information on any destruction of the infrastructure and casualties among the civilian population or military was received; further information is ascertained.

The town of Schastya including the territory of the TPP (thermal power plant) was mortared overnight.

Hostilities were also reported in Troitske (Popasna district), which outskirts were mortared after 8 pm, and in Katerynivka, which was shelled in the afternoon. No casualties were reported.

Militants make regular attempts to cut into rear of ATO forces, the founder of the Information Resistance Group, Dmytro Tymchuk, posted on Facebook on May 13.

Rebels constantly fired on positions of ATO forces and civilian targets in the area between Maryinka and Avdiivka. They also shelled army positions in Opytne and Avdiyivka with 120-mm mortars and in Pisky with 152-mm artillery.

The settlement of Maryinka was attacked with 82- and 120-mm mortars.

Also, insurgents fired 122-mm artillery on Novhorodske and Shyroka Balka (to the north of Avdiivka).

In the Artemivsk direction, militants committed to action military hardware, which was covered with mortar fire.

matériel moved up to Lugansk

Rebel units stationed near the Bakhmutka highway and to the north of Lugansk have been regrouped and redeployed to Stanyzia Luganska, the founder of the Information Resistance Group, Dmytro Tymchuk, posted on Facebook on May 14.

According to data provided by the IRG, gunmen move up their tank reserves: 6 tanks and 18 ACVs were moved from Krasny Luch through Alchevsk, and 16 armoured vehicles were repositioned through Krasnodon to Lugansk and then closer to front lines.

In total, 11 new units of armoured vehicles (3 of which were tanks) and SP artillery arrived to Donbass from the RF in the past 24 hours.

No soldier deaths were reported in the area of the anti-terrorist operation in the past 24 hours, but 4 fighters were wounded, a spokesman for the Ukrainian National Security and Defence Council, Andriy Lysenko, reported at a briefing on Thursday.

The Russian Emergencies Ministry has sent yet another column of trucks with alleged humanitarian aid for Donbass to Ukraine, the BBC Russia reported on Thursday with a reference to the ministry.

According to the report, the column included over 100 vehicles. It is the 26th convoy, which has entered into Ukraine without permission of the Ukrainian authority since August last year.

The Ukrainian authorities have repeatedly said that these convoys were used to ship weapons, ammunition and other supplies to rebels in occupied territories of the Donetsk and Lugansk regions, and to take home bodies of Russians killed in battles in the east of Ukraine.

General Staff: 25 drones reported over the ATO area in the past 24 hours

25 enemy UAVs were spotted on reconnaissance missions over the ATO area in the past 24 hours, a spokesman for the Ukrainian National Security and Defence Council, Andriy Lysenko, reported at a briefing.