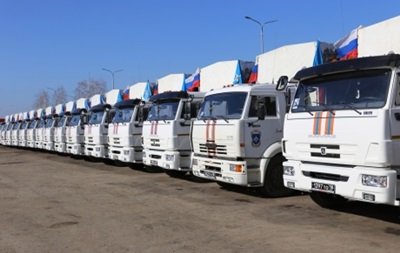 A column of trucks of the Russian Emergency Ministry has set off for Donbass carrying "humanitarian aid", the National Emergency Management Centre of the REM told journalists, as reported by RIA Novosti.

"Over 100 trucks have left the Donskoy Rescue Centre of the REM and are on their way to the state border, an agency's collocutor said.

"After having passed through all the necessary custom formalities at the Donetsk and Matveyev Kurgan border check points, the column split in two parts just before the border; one of those is going to Donetsk, and the other one to Lugansk," the agency reported.

Russia announced earlier this week that the convoy would deliver food, building materials and medicines to Ukraine’s east.

It should be also mentioned that Russia delivers "humanitarian aid" violating international rules. The Ukrainian part and the world community believe that the Kremlin supplies gunmen with weapons and other things in such a way.

Militants continue to breach the ceasefire foreseen in the Minsk agreements by attacking positions of ATO forces along the whole demarcation line.

In the Donetsk direction, rebels assaulted army positions with heavy infantry weapons, including "banned" 120-mm mortars over the past 24 hours, the founder of the Information Resistance Group, Dmytro Tymchuk, wrote.

Insurgents ordered into action snipers and infantry forces near the settlements of Pisky, Opytne, Avdiyivka, Kirove, Leninske, Maryinka, and Krasnogorivka.

Several rebel armoured units (in total 20 tanks and ACVs) were observed moving around and attacking ATO forces in the sector between Opytne and Krasnogorivka.

Manoeuvring rebel armoured units carried out attacks on Ukrainian troops with ZU-23-2 AA mounts and 122-mm artillery near the settlements of Novotoshkivka, Zolote, and Donetske.

Furthermore, rebel sabotage and reconnaissance groups increased their activity in these areas.

Russia concentrates personnel and materiel including mobile missile systems, tanks and artillery on the border with Ukraine according to this week's report presented by a Reuters' correspondent.

Many of the vehicles have number plates and identifying marks removed while many of the servicemen had taken insignia off their fatigues. As such, they match the appearance of some of the forces spotted in eastern Ukraine, which Kiev and its Western allies allege are covert Russian detachments.

Earlier this month, NATO military commander General Philip Breedlove said he believed the separatists were taking advantage of a ceasefire that came into force in February to re-arm and prepare for a new offensive.

Russia denies that its military is involved in the conflict in Ukraine's east, where Moscow-backed separatists have been fighting forces loyal to the pro-Western government in Kiev.

Russia's defence ministry said it had no immediate comment about the build-up. Several soldiers said they had been sent to the base for simple military exercises, suggesting their presence was unconnected to the situation in Ukraine.

The weapons being delivered there included Uragan multiple rocket launchers, tanks and self-propelled howitzers -- all weapon types that have been used in the conflict in eastern Ukraine between Kiev's forces and separatists.

The amount of military hardware at the base was about three times greater than in March this year, when Reuters’ journalists were previously in the area. At that time, only a few dozen pieces of equipment were in view.

Over the course of four days starting on Saturday, Reuters saw four goods trains with military vehicles and troops arriving at a rail station in the Rostov region of southern Russia, with at least two trainloads traveling on by road to the base.

Putin classifies information about losses suffered by the army "in peacetime"

Russian President Vladimir Putin has classified all information on army losses suffered in the course of special operations in peacetime, Lenta.ru reported with a reference to the relevant presidential decree published on the official RF government page.

The decree also refers to confidential information on people being under investigation by the intelligence agencies and law enforcement agencies in order to force them to cooperate.

According to reports, the information on people, who was involved in such cooperation, was also classified recently.

American experts: Many attacks on ATO forces were conducted from Russian territory

A group of American analysts of the "Atlantic Council" has presented a report called "Hiding in Plain Sight: Putin's War in Ukraine" on Russian aggression in Donbas,

Discussions in March 2015 with senior Ukrainian civilian and military officials in Kyiv, investigative journalists, and a fact-finding mission to eastern Ukraine inform the report and its conclusions. It finds:

Satellite images confirm the movement of Russian troops and camp buildups along the Ukrainian border.

Russian training camps stationed along the Ukrainian border are the launching points of Russia’s war in Ukraine. These camps are the staging ground for Russian military equipment transported into Ukraine, soon to join the separatist arsenal, and for Russian soldiers mobilized across Russia to cross into Ukraine.

Commanders order Russian soldiers to conceal the identifying features of military vehicles, remove insignia from uniforms, and travel across the border to join separatist forces in eastern Ukraine.

A variety of Russian manufactured arms and munitions not used by the Ukrainian military have appeared in the hands of separatists, including shoulder launched surface-to-air missiles (MANPADS), various types of rocket launchers, anti-tank guided missiles, landmines, and various small arms.

During key offensives, Russian forces in Ukraine have received cover from Russian territory. A combination of satellite data, crater analysis, and open source materials confirms that many attacks originated in Russia, not in the separatist controlled areas of Ukraine, the report says

No losses were reported in the area of the anti-terrorist operation in the past 24 hours, a spokesman for the Presidential Administration on ATO issues, Andriy Lysenko, reported at a briefing on Thursday. According to Lysenko, rebels' activity significantly decreased on Wednesday.

In the Mariupol direction, militants carried out several attacks on our positions with mortars and 122-mm artillery near Mykolayivka and Shyrokine.

In the Donetsk direction, the situation around the Donetsk airport also improved; no artillery attacks were reported in this area overnight.

In the Lugansk direction, the enemy fired along the broad front sector covering the territory from Popasna to the town of Schastya.

Three enemy UAVs were observed spying over the ATO area in the past 24 hours.

Poroshenko wants to bring Russia back to the negotiating table

and launch a dialogue with Donbass

Ukraine’s priority is to bring Russia to the table of negotiations and start dialog with Donbas, the Ukrainian president announced on May 28, when addressing the Kyiv security forum, Ukrayinska Pravda reports.

Poroshenko reminded that Ukraine had given up its nuclear weapons. Now, the guarantors of the Budapest memorandum and the world are to offer an effective mechanism to Ukraine to restore its territorial integrity and prove their reliability.

“We have to make sure that the troops are withdrawn from Donbass, the border with the RF is sealed assisted by the OSCE, UN peacekeepers and EU police forces,” Poroshenko said.

We have to launch the political process in Donbas. Rebel leaders and terrorists do not represent Donbas population. We have to guarantee an honest and open election. We will maintain dialog with a new Donbass, he asserted.