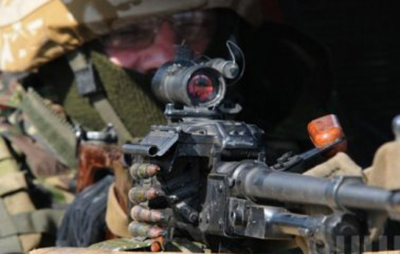 Rebels began shelling Krasnogorivka and Maryinka on the morning of June 3, an MP and the facilitator of the Kyiv-1 battalion, Yevgeny Dedey, posted on Facebook.

"A heavy bombardment began at 4.50 AM. There are casualties. Krasnogorivka and Maryinka are on fire," he said. "Fierce battles are raging along front lines. Rebels are on the offensive," he added.

and attacking with banned weapons

Rebels continued to fire on positions of Ukrainian troops in the ATO area in the period between 6.00 PM June 2 and 6.00 AM of today, the ATO press centre posted on its Facebook page.

In the Mariupol direction, insurgents carried out attacks on Shyrokine with 122-mm artillery, mortars, and grenade launchers and machine-guns. Also, a number of sniper attacks were reported here.

In the Lugansk direction, rebels fired machine and submachine guns on Frunze and Schastya. Stanyzia Luganska came under artillery fire.

They combined fire mainly in the Donetsk direction.

27 UAVs were reported over the ATO area in the past 24 hours.

More than 20 soldiers have been wounded in hostilities occurring near Maryinka, Donetsk region, LIGABusinessinform announced. According to reports, Russians were attempting to encircle Ukrainian positions committing Grad MLRSs and tanks. Furthermore, Hromadske TV reported with a reference to a volunteering physician, Armen Nikohosyan, that about 25 soldiers had been wounded near Krasnogorivka and Maryinka at that moment.

General Staff: 3 service members were wounded in the ATO area

3 Ukrainian military were wounded in the area of the anti-terrorist operation in the past 24 hours, a spokesman for the Presidential Administration on ATO issues, Andriy Lysenko, reported at a briefing on Wednesday.

Lysenko asserted that rebels had carried out over 40 attacks on Krasnogorivka and Maryinka overnight.

If Vladimir Putin’s ends remain mysterious, so do the means, Bloomberg reports.

Putin is allocating unprecedented amounts of secret funds to accelerate Russia’s largest military build-up since the Cold War, according to data compiled by Bloomberg. The part of the federal budget that is so-called black -- authorized but not itemized -- has doubled since 2010 to 21 per cent and now totals 3.2 trillion rubles ($60 billion), the Gaidar Institute, an independent think tank in Moscow, estimates.

Stung by sanctions over Ukraine and oil’s plunge, Putin is turning to defence spending to revive a shrinking economy. The outlays on new tanks, missiles and uniforms highlight the growing militarization that is swelling the deficit and crowding out services such as health care. Thousands of army conscripts will be moved into commercial enterprises for the first time to aid in the rearmament effort.

“The government has two urgent tasks: strengthening security at all levels of society and promoting innovation to end the macroeconomic stagnation,” said Ruslan Pukhov, director of the Centre for Analysis of Strategies and Technologies and an adviser to the Defence Ministry in Moscow. “The solution to both problems is to intensify the development of the military-industrial complex.”

Since bringing the country back from the brink of bankruptcy a decade and a half ago, Putin has increased defence spending more than 20-fold in ruble terms. In dollars, it exceeded $84 billion last year, more than any other nation except the U.S. and China, according to the Stockholm International Peace Research Institute.

Defence and the related category of national security and law enforcement now eat up 34 per cent of the budget, more than double the ratio in 2010. The U.S., by comparison, spent 18 per cent, or $615 billion, of its budget last year on defence and international security, according to the Washington-based Centre on Budget and Policy Priorities.

After studying Putin’s actions in Ukraine, including his seizure of Crimea, the National Defence Academy of Latvia, a former Soviet satellite that is now part of NATO and the European Union, concluded that Russia’s ultimate aim is to introduce “a state of permanent war as the natural condition in national life.”

“We can and must do for the defence industry what we did for Sochi,” Putin told generals and executives near the Black Sea resort on May 12, referring to the $50 billion Russia spent to host the 2014 Winter Olympics there. “All questions relating to adequate resource allocation have been resolved.”

Three civilians wounded in Krasnogorivka as a result of shelling

Three civilians were wounded as a result of rebel artillery attacks on Maryinka, Donetsk region, the Ministry of Internal Affairs in the Donetsk region reported on Wednesday.

"A woman, 35, and her 17-year-old daughter were hospitalized in Kurakhovo," a statement reads.

Fighting for Maryinka is going on; ATO forces have not retreated, Head of the ATO press-centre Vladislav Selezniov told "Ukrainska Pravda".

Rebels claim in turn that it is ATO forces who are attacking them and threaten this may result in resuming hostilities, RIA Novosti reports.

"It is a provocation, so as to be able to accuse us in an attempt to break through to Maryinka. Maryinka is our territory anyway," one of the alleged PRD leaders, Vladimir Kononov, announced despite the fact that Maryinka should belong to territories held by government forces according to provisions of the Minsk agreement.